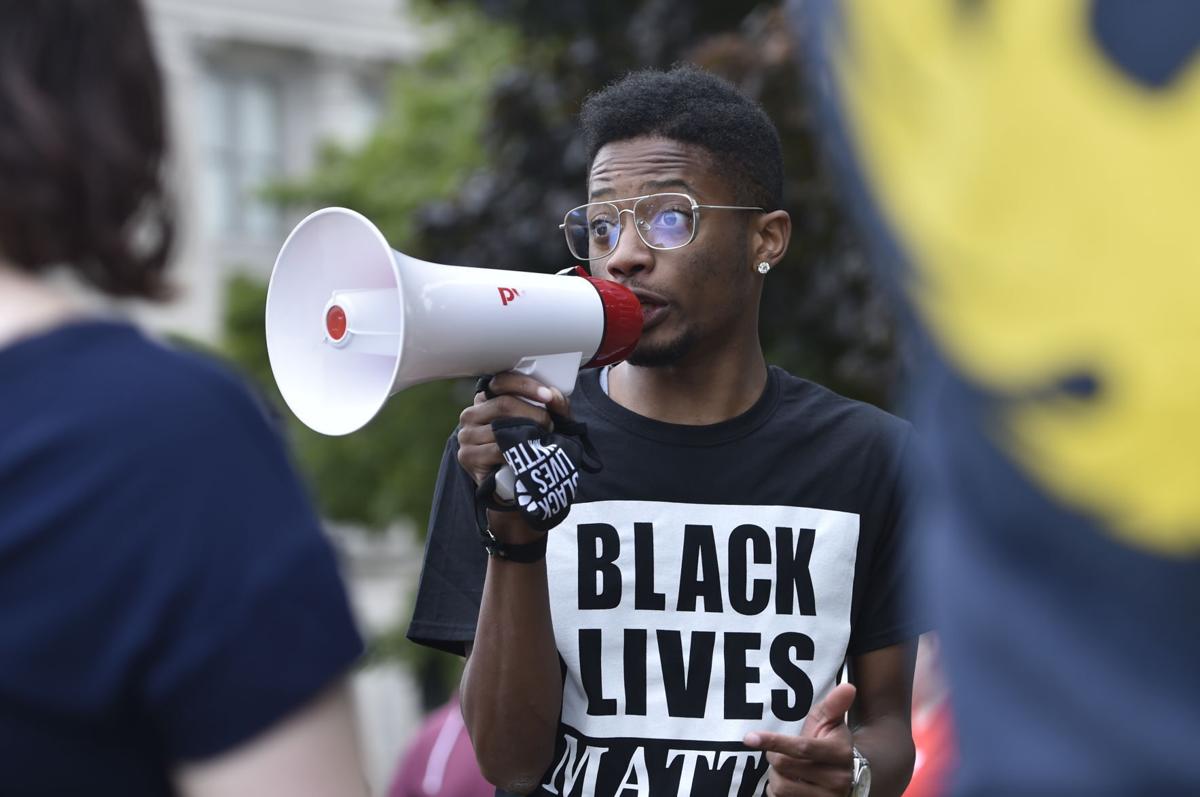 Kejuan Goldsmith of Racine leads a march through the streets of Kenosha on Sept. 1, the day President Donald Trump visited the city. 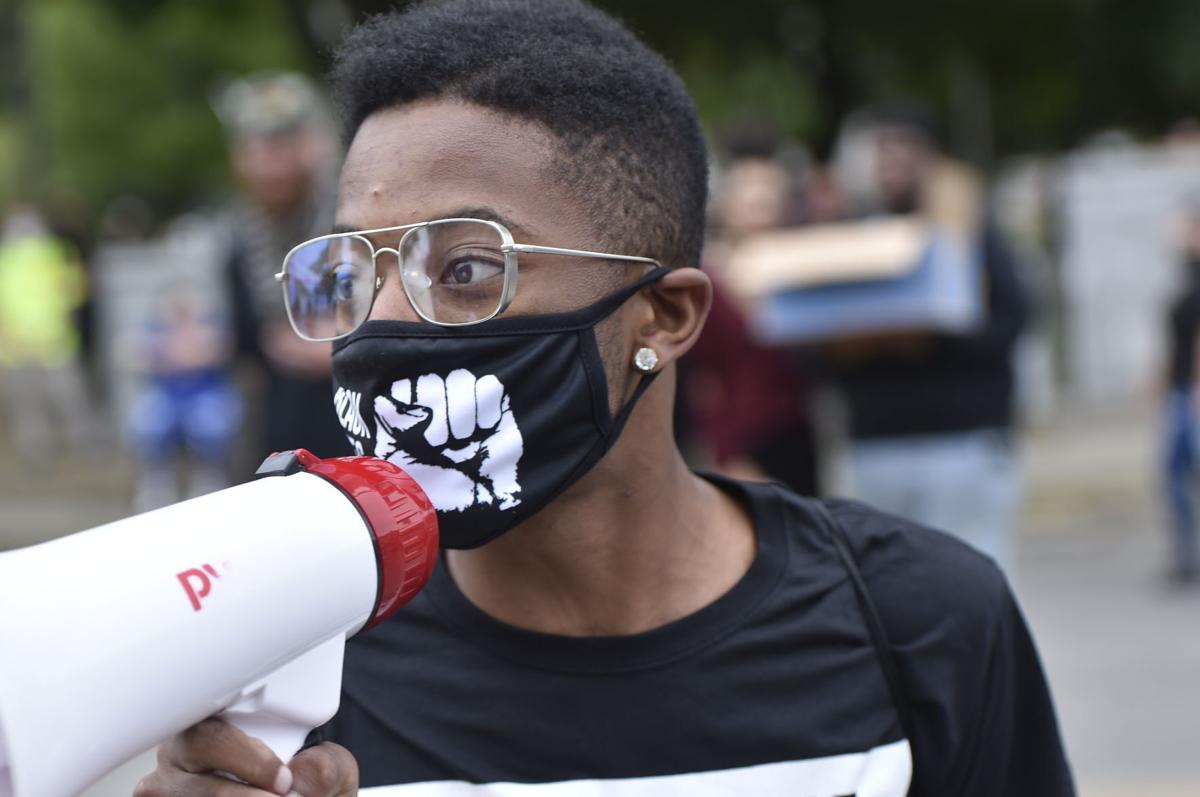 Goldsmith started actively volunteering when he was 13. He slowly became interested in politics from there and has grown into a full-time organizer.

RACINE — Kejuan Goldsmith is adjusting back to college life at the University of Wisconsin-Green Bay. He is a sophomore majoring in environmental policy and planning and theater studies, and minoring in democracy and justice studies.

But school isn’t the only thing he’s been focusing on lately. The Racine native and Case High School graduate has also been very active in the recent Black Lives Matter protests, even organizing some himself.

He said he wants to spend his life helping people and making the world a better place.

“Oh my gosh, Racine is my home,” he said. “I want to spend most of my life making that city better.”

But it’s not just Racine. He feels very tied to Kenosha as well, especially considering recent events. Besides his sister living there, his friends also live there.

Goldsmith started actively volunteering when he was 13. He slowly became interested in politics from there, and has grown into a full-time organizer.

His anger started after a man shot 17 students and faculty members at Marjory Stoneman Douglas High School in Parkland, Florida in February 2018. The event caused him to want to be an activist.

“I became extremely pissed, very angry, very scared. I was a senior in high school really worried about if a shooter would’ve came inside my high school, did that to my school and my people, or to me. And so I started speaking up.”

He attended a legislative listening session in March 2018 at the Dr. John Bryant Community Center with State Rep. Greta Neubauer, D-Racine, as one of two students there. After that, he said, he started being recognized for his activism and his voice began to span a larger audience.

He started organizing protests and rallies to make sure everyone had a voice, he said. And then George Floyd was killed by police in Minneapolis.

“That really, really, kicked off a lot of stuff for me, because that’s when I started protesting every day,” Goldsmith said.

He was still on campus at UW-Green Bay, so he along with his friends organized the city’s biggest protest in recent history, with an estimated 2,500 people attending at its peak. He continued to protest in Appleton, Sheboygan, Milwaukee and then came home to Racine to protest.

Goldsmith got a call an hour after Jacob Blake was shot by police on Aug. 23, informing him what happened. He went out to the Kenosha County Courthouse almost immediately after.

“Everybody was downtown. It was like a war zone every night for the first couple days,” Goldsmith said.

Then the protests began. He was tear-gassed at protests the night of and the day after Blake’s shooting. He didn’t protest Aug. 25 because he was recovering from the tear gas, the day Kyle Rittenhouse shot two people.

He has continued to participate in or lead protests, large or small. He mainly gets the word out via Facebook.

It’s to draw awareness to the Black Lives Matter cause and get the officer who shot Jacob Blake arrested, Goldsmith said.

“If I’m not out there, either keeping the peace or providing energy, then who’s going to provide it? Who’s going to be there and do it? I have my own way, my own style, and I really enjoy being out there and making a difference.”

He said that as a Black man, he knows what it’s like to have something or have nothing. He doesn’t want his kids to grow up having to worry about the same things he has to worry about such as police brutality or racial injustice.

The messages he spreads at rallies and protests are always about peace.

“You can’t win things through violence,” he said. “You should always defend yourself but violence is never, ever, ever the option.”

Over the summer, Goldsmith was a field organizer at Minnesota Democratic-Farmer-Labor Party, based in St. Paul. Goldsmith was able to work from home in Racine and help out with the election and campaigning.

After he graduates from college, he plans on returning home or maybe going to law school. But one thing he knows he wants to do within the next year or two is start a nonprofit in Racine. The nonprofit is tentatively called The Change Makers and will be focused on activism for youths.

He already is active at UW-Green Bay, acting as a promoter on the leadership board for the Black Student Union on campus and is involved in theater.

He has big ideas for where he wants his activism to go. He wants to stop police brutality and change the system so that Black people don’t have to avoid the police.

“I don’t want to live like this, and I don’t think anyone else should in the future too.”

Sept. 10: The Journal Times pages from the past

A collection of front pages from The Racine Journal Times published on this day in history, decade by decade, from 1900 to 2000.

Kejuan Goldsmith of Racine leads a march through the streets of Kenosha on Sept. 1, the day President Donald Trump visited the city.

Goldsmith started actively volunteering when he was 13. He slowly became interested in politics from there and has grown into a full-time organizer.