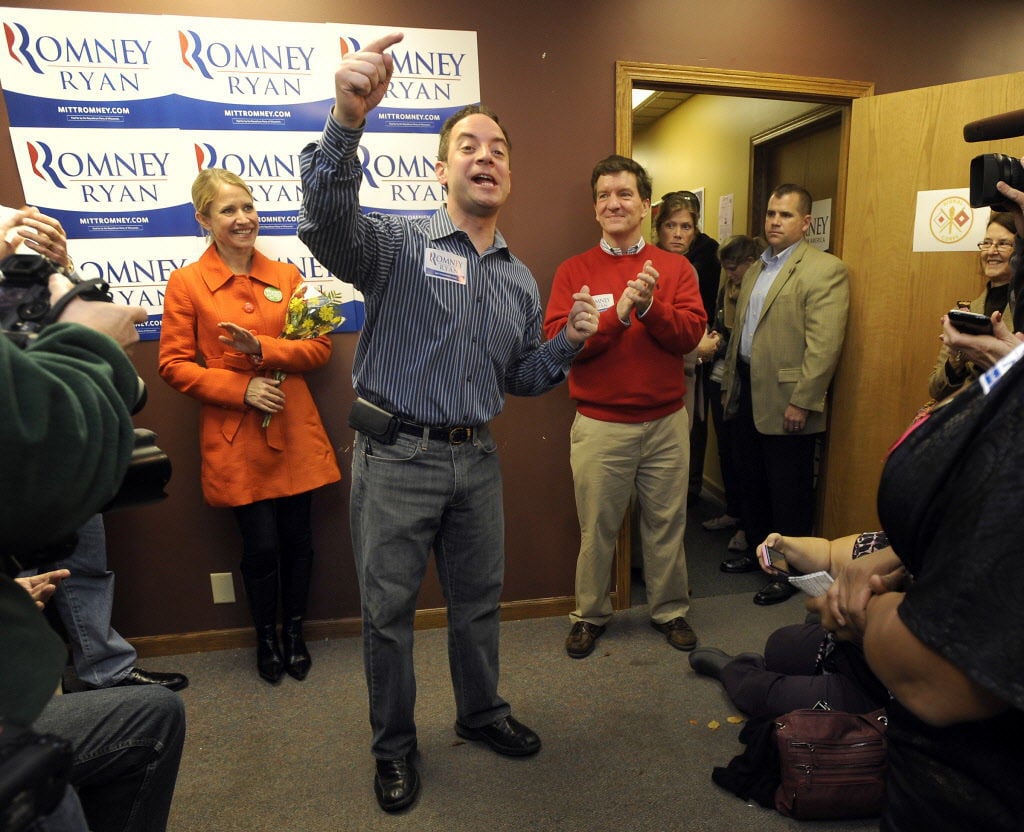 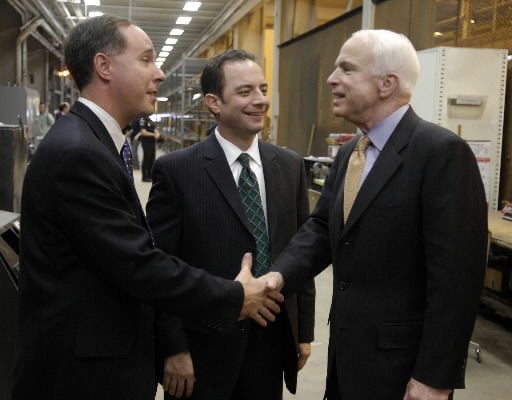 State Rep. Robin Vos, left, and Reince Priebus, then the chairman of the Republican Party of Wisconsin, meet Republican presidential candidate John McCain after an economic summit at Bucyrus International, Inc., in South Milwaukee on April 16, 2008. 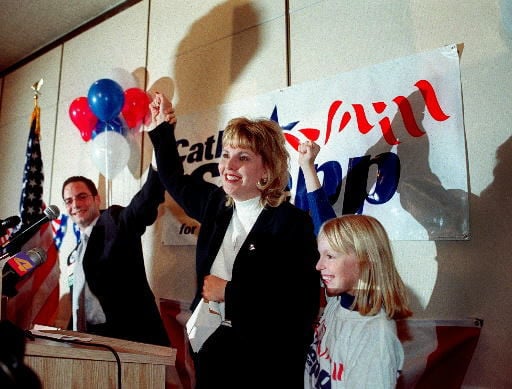 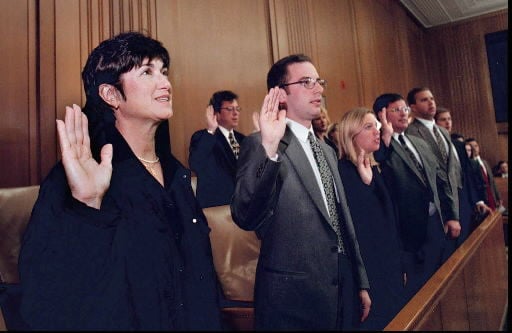 Reince Priebus, second from left, along with other attorneys, are sworn into the Racine County Bar Association on Sept. 27, 1999, at the Racine County Courthouse. Priebus started his career at the law firm of Michael Best & Friedrich.

CALEDONIA — Many at Grace Church don’t know Reince Priebus as the savvy operative and political heavyweight about to enter what some argue is the second-most powerful position in the country.

They know Priebus as a principled, devout Christian whose faith helps guide him. Church members say a strong work ethic and love for politics was evident long before his rise from Wisconsin state politics to the White House, where he is set to become President-elect Donald Trump’s chief of staff.

“I am not surprised at all that he has risen to a position of such influence in our country,” said John Binkley, a longtime friend of Priebus. “I’m grateful for it. We need more men like him in positions of influence and impact in the world.”

Fresh out of law school and newly married, Priebus came to Grace Church, 3626 Highway 31, in about 1999, Binkley said.

Priebus, who has Greek heritage, maintained dual participation with Kimissis Greek Orthodox Church in Racine, Binkley said. (Officials there could not be reached for comment.)

“He was passionately focused on his marriage, on his career, on his faith,” Binkley said. “His faith was something very important to him.”

In the small-group settings, Priebus often asked questions and absorbed information as he grew in his faith, Binkley said. Priebus’ wife, Sally, was also heavily involved in the church, particularly with music.

In interviews, church officials raved about how Priebus used his legal background to perform countless hours of pro bono work in areas such as real estate, church administration and liability releases.

“He was a great asset,” former church administrator Randy Due said. “He was friendly. He was fun. He knew his stuff.”

One of his early forays into politics was an unsuccessful run for state Senate in 2004 against Democratic Sen. Bob Wirch of Somers. In 2007, he became chairman of the Republican Party of Wisconsin. He and his wife moved to Washington after Priebus won the Republican National Committee chairmanship in 2011, though the couple still maintain a residence in Somers.

As Priebus progressed in his career, “my interactions were, as a pastor, to keep grounded and to keep focused on the Lord and values and integrity,” former senior pastor Jerry Worsham said.

Worsham used to give Priebus stories to read about Abraham Lincoln and William Wilberforce, a member of the British Parliament and active evangelical Christian. They were not only politicians who were instrumental in ending slavery on their respective sides of the Atlantic Ocean, but men of character with a strong spiritual component, Worsham said.

Worsham’s wife, Jane, recalled that whenever her husband delivered a message on leadership, Priebus immediately sought him out afterward.

“He knew that’s what he was and what he was designed to do. He just wanted to do it in the right way,” she said.

“We saw the progression up close, so it wasn’t a surprise going into leadership at all, with the party. And (we’re) just thrilled to see him be honored and respected as he is in the new role.”

Priebus’ ascension to White House chief of staff capped a roller-coaster 2016. He stuck by Trump’s side from the moment the New York billionaire became the presumptive nominee, through his controversial and turbulent campaign and all the way to his stunning Nov. 8 victory.

In his new role, Priebus will act as a gatekeeper of information and access to the president and play a big role in everything from policy making to political strategy.

“Even though it’s a powerful position, I hope he remains humble and has a sense of integrity,” Due said.

Binkley, who stays in touch with Priebus, believes Trump has a right-hand man who got into politics for the right reasons. It wasn’t for power or prestige, but to try to make the world a better place, he said.

“Reince has a keen intellect, unwavering integrity and a ferocious work ethic,” said Binkley, who now owns a recruiting firm in North Carolina. “Yet he’s also extremely likable, very humble and incredibly down to earth with a hilarious sense of humor. He’s got this interesting combination of attributes that I think are the makings of a good leader.”

"I am not surprised at all that he has risen to a position of such influence in our country. I'm grateful for it. We need more men like him in positions of influence and impact in the world."

For photos of Reince Priebus' rise in politics through the years, go to journaltimes.com/gallery

In photos: Reince Priebus through the years

State Rep. Robin Vos, left, and Reince Priebus, then the chairman of the Republican Party of Wisconsin, meet Republican presidential candidate John McCain after an economic summit at Bucyrus International, Inc., in South Milwaukee on April 16, 2008.

Reince Priebus, second from left, along with other attorneys, are sworn into the Racine County Bar Association on Sept. 27, 1999, at the Racine County Courthouse. Priebus started his career at the law firm of Michael Best & Friedrich.