BURLINGTON — Voters will have four opportunities to learn more about the Echo Lake issue before heading to the polls Nov. 8 for a nonbinding citywide referendum.

The city has scheduled four public meetings to discuss the issue and answer questions about the future of the troubled manmade lake.

City officials will be available to answer questions about Echo Lake and the issue being presented in an advisory referendum on the Nov. 8 ballot. Advisory means that Burlington’s elected leaders are not required to follow the wishes of the voters.

The city must decide soon whether to remove the dam at Echo Lake and allow the impoundment to drain permanently into the White River, or whether to invest in rebuilding the dam and dredging the lake.

The Wisconsin Department of Natural Resources has determined that the city-owned dam no longer meets state safety standards, and must be either improved or dismantled.

If the dam is removed and the lake is drained, a restored White River would resume flowing naturally through the 70-acre area now occupied by the impoundment. The dam was built on the White River in the 1800s as a source of power for local industry.

Supporters of removing the manmade lake say that doing so would be better for the environment and more natural, while those advocating to save the lake say it is a treasured community asset worth salvaging.

The state has approved a $1 million grant regardless of which project the city chooses. The U.S. Army Corps of Engineers has agreed to consider offering additional funding if the city chooses to remove the dam and drain Echo Lake.

For the referendum, city officials have included millions of dollars in optional amenities that could be added to the project, such as bridges across the river or a decorative fountain on the lake. With those additional expenses, the referendum will ask voters to choose between hypothetical options of removing the lake at a cost of $7.7 million and rebuilding the lake at a cost of $8.1 million.

Burlington aldermen elected not to hold a referendum strictly on the question of whether to keep the lake.

The referendum will appear on the Nov. 8 ballot alongside statewide elections for U.S. senator and governor.

City officials plan to send informational mailings to all residents within the next week or so. State law requires municipalities to provide objective information without advocating a preference in local referendums and elections.

Two groups are active on the Echo Lake referendum issue — the Save Echo Lake group and the White River Renewal group. If any group spends more than $10,000 campaigning, the group must register with the city as a referendum committee and must report on its finances under rules of the Wisconsin Ethics Commission.

It'll be a Halloween trick-or-treat this year! 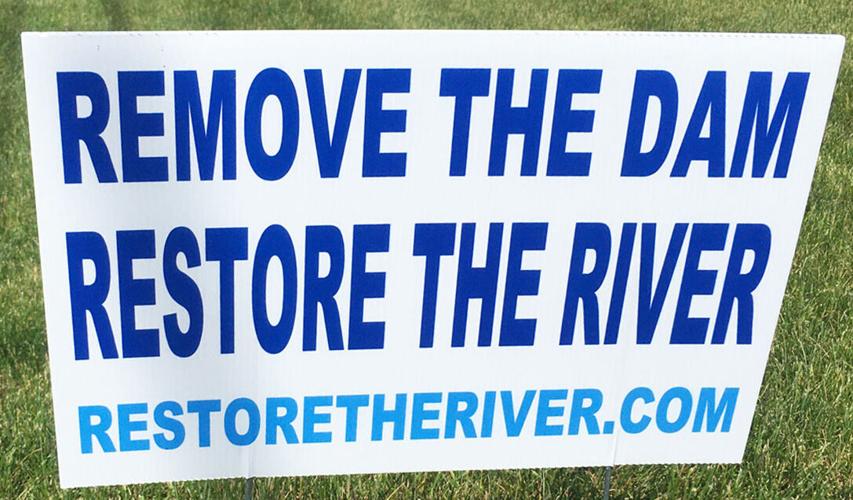 One of several "Remove the dam, restore the river" signs seen around Burlington. 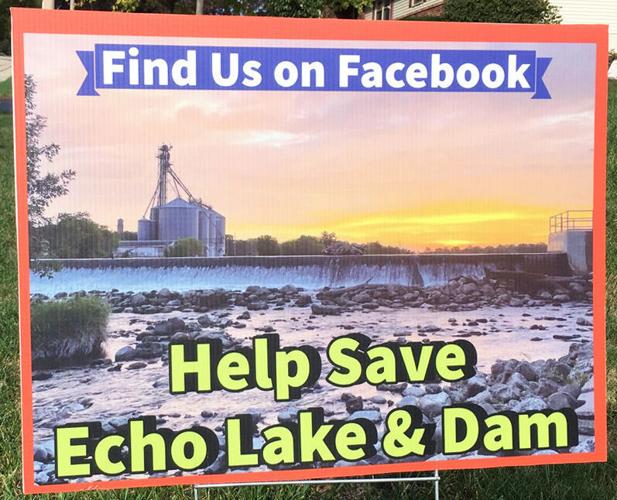 One of several "Help save Echo Lake & Dam" signs seen around Burlington.