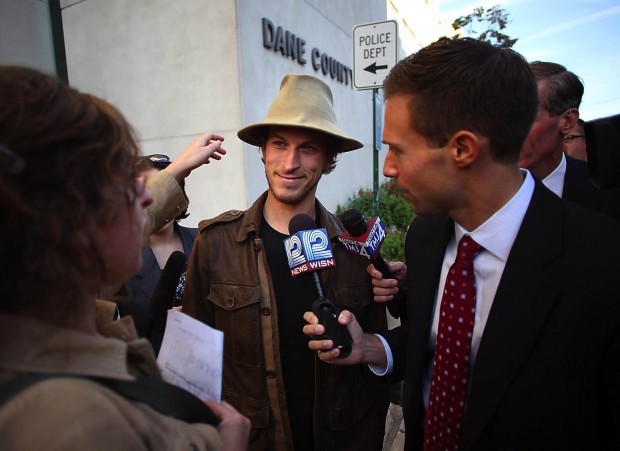 Miles Kristan, center, is greeted by a supporter Bridgette O'Brien, left, and swarmed by television news crews after meeting with Madison Police on Thursday, September 15, 2011. Kristan came to the police department with a small group of supporters and met with police for about 30 minutes. Craig Schreiner - State Journal 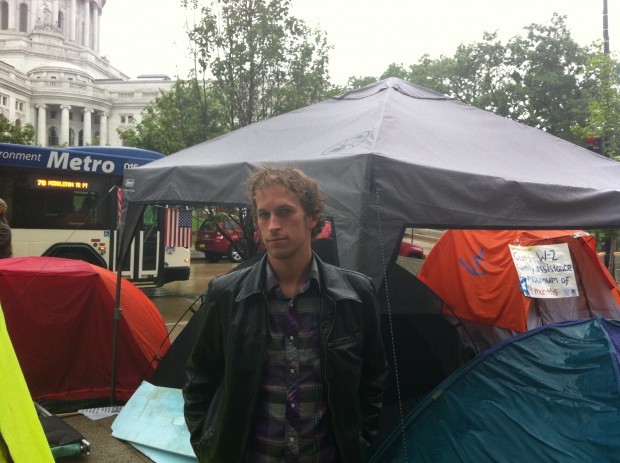 Miles Kristan in Madison, Wis. on June 15, during protests against legislation supported by Gov. Scott Walker.

MADISON -- A Racine native was cited for disorderly conduct Thursday for his alleged involvement in pouring a beer over Rep. Robin Vos' head the night before.

Miles Kristan, 26, turned himself into police Thursday and was cited and then released without incident, said Captain Mary Schauf of the Madison Police Department.

Madison police were called to the Inn on the Park, 22 S. Carroll St., at about 10 p.m. Wednesday after a man dumped a beer over the head of a 43-year-old lawmaker, later identified as Vos, R-Rochester.

Vos represents Caledonia and parts of Western Racine County and co-chairs the Joint Finance Committee, which was at the center of the budget debate and collective bargaining law changes.

"While I have long been a proponent of free speech, it's a shame when the expression turns into criminal behavior," Vos said in a statement about the incident. "Legislators are regularly harassed by certain protestors and this is an unfortunate reminder of what lawmakers have to put up with every day in Madison. Hopefully, the protestors will realize this only hurts their cause with the public."

"No doubt what the Republicans have done with their agenda angered a lot of people in this state," Mason said. "But regardless of that it is not acceptable to pour beer on someone's head if you don't agree with their politics."

The bartender said the man yelled out something like, "Money" and "Damn Republicans," according to the police report.

Beer also splashed onto two other Republican state lawmakers, who have been identified as Assembly Majority Leader Scott Suder of Abbotsford and Rep. John Nygren of Marinette. The suspect swore at them and called them criminals, the report said.

He was allegedly accompanied by a man with a video camera, according to the police report. The bartender asked the videographer to turn it off. She said following the request, the suspect then allegedly took the glass of beer and emptied it onto the lawmaker's head. The suspect then fled, report said. Vos indicated the suspect has been harassing him since February, but up until this point, it had only been verbal, according to the report.

Kristan, who considers himself an independent, was arrested back in March for throwing a pink nightgown or "pink slip" at Vos during a Republican fundraiser at the Racine Marriott, 7111 Washington Ave. Kristan grew up in Racine and moved to Madison this winter to be a part of the protests. For a few weeks he lived in the Capitol and later in "Walkerville," the tent community outside the Capitol. He cooks at a Madison area restaurant, he said without being specific.

The Journal Times reached Kristan by cell phone Thursday afternoon and at the time he would not confirm his involvement in the incident. But he said then that the person involved would be going to police later in the day and about 50 additional people were expected to also admit their involvement.

Later Thursday at about 5:30 p.m. Kristan turned himself in. About 10 people showed up at the police station with Kristan, Madison police said, but Kristan was the only one cited. When reached by cell phone Thursday night, he would not confirm if he was the one who directly poured the beer on Vos.

No fine has been set yet for Kristan. Schauf said. Kristan is due in Dane County Circuit Court on Oct. 10.

MADISON - When Miles Kristan unzipped the door to his temporary home over the last two weeks, he could clearly see the state Capitol from his …

Speaker praises local Republicans at fundraiser for ‘leading the nation’

Miles Kristan, center, is greeted by a supporter Bridgette O'Brien, left, and swarmed by television news crews after meeting with Madison Police on Thursday, September 15, 2011. Kristan came to the police department with a small group of supporters and met with police for about 30 minutes. Craig Schreiner - State Journal

Miles Kristan in Madison, Wis. on June 15, during protests against legislation supported by Gov. Scott Walker.