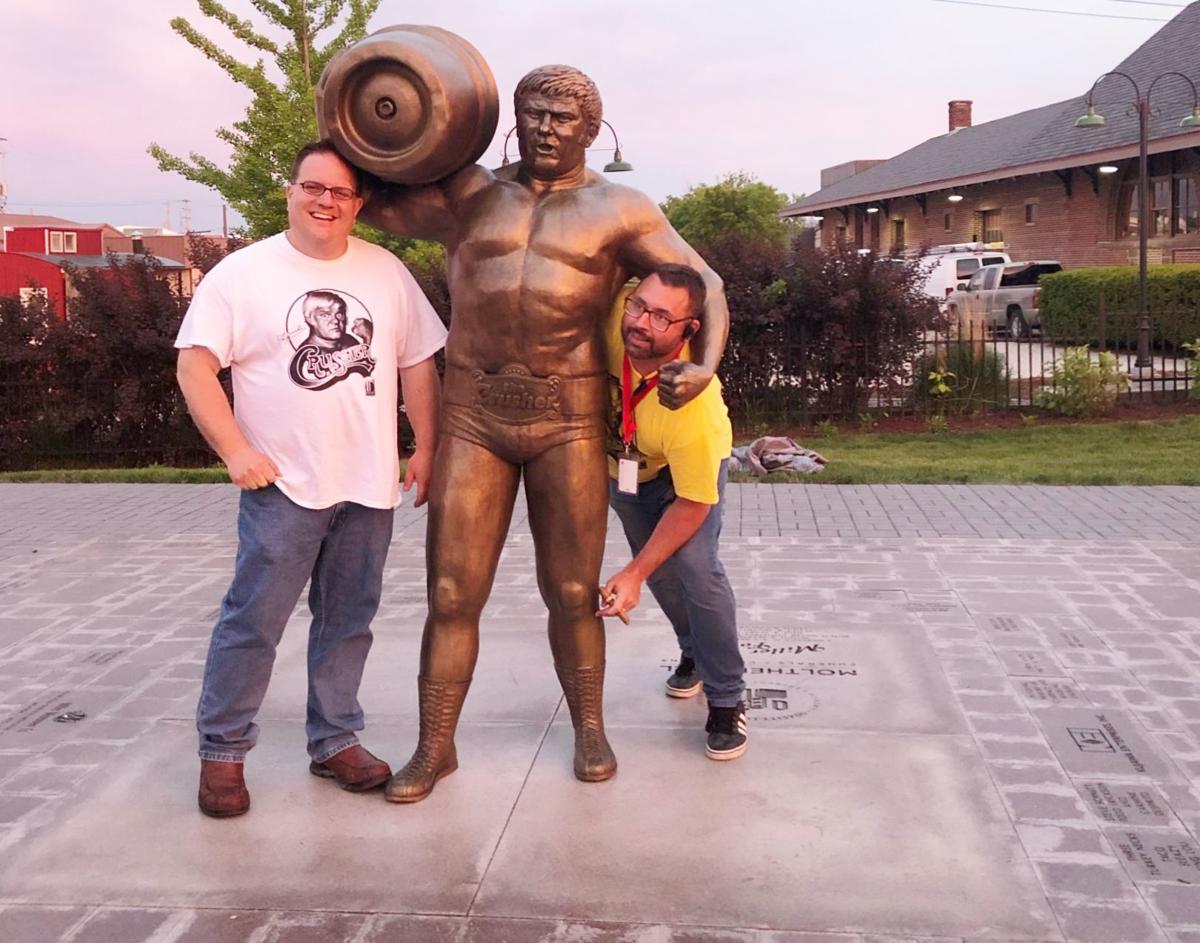 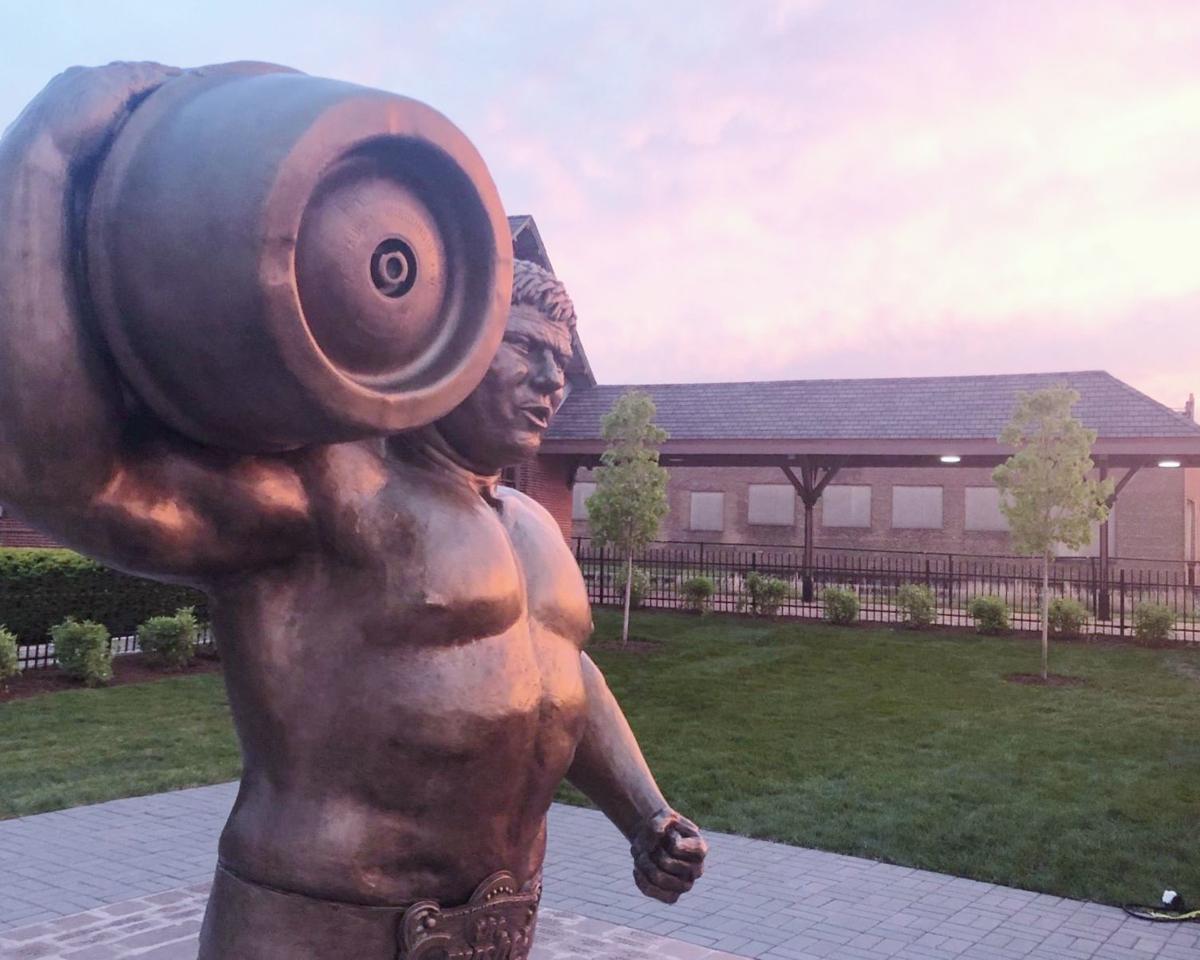 MOUNT PLEASANT — Just when the legacy of Reggie “Da Crusher” Lisowski was about to be counted out, Chris Smith, Mount Pleasant’s village attorney, entered the ring and saved it.

Smith, who also is the attorney for the City of South Milwaukee, helped raise funds to honor the legacy of Lisowski, a South Milwaukee native, and over the weekend that legacy was celebrated with Da Crusher Fest.

Smith said he was expecting about 5,000 people for the two-day festival; they ended up drawing about 13,000.

At Da Crusher Fest, a bronze lifelike statue of Lisowski was revealed with one arm holding a beer keg over his shoulder, and the other arm perfectly positioned to be used as a headlock for people wanting a unique selfie.

“I’m ecstatic with how the statue turned out,” Smith said.

Complete with a wrestling tournament and local vendors, Da Crusher Fest drew people in from all over southeastern Wisconsin, including a few Mount Pleasant officials.

Throughout the weekend, Smith was directing foot traffic and at one point he nearly “shut down” the wrestling tournament before the main event and was booed from the crowd. Then the hero wrestler from the main event entered the tent, confronted Smith and took him down to the mat with a “stunner” move so the match could continue.

It was all in good fun, although Smith said his shoulder was still sore from hitting the mat. But it was an event that almost didn’t happen.

Smith, along with another city attorney, grew up as wrestling fans.

“One of the reasons why we were excited to have South Milwaukee as a client was because it’s the home of Da Crusher,” Smith said. “He wasn’t just a super good wrestler, he was a really good citizen. Charitable, generous, just a good neighbor.”

When Smith got the job with South Milwaukee he asked if the city had anything like a plaque or statue commemorating their native pro-wrestling hero.

The answer was no.

Lisowski wrestled mostly in the American Wrestling Association during the 1960s and did wrestle a little bit in the World Wrestling Federation before it was renamed World Wrestling Entertainment.

Smith tried looking at the WWE website and social media to find older videos of Lisowski without success and was concerned his memory would be lost.

“I still remember him tag-teaming with Demolition (another wrestler),” Smith said. “I remembered that and it stuck with me even when I became older and was in college … it stuck with me this ‘Who is this Milwaukee guy?’ ”

“He had kids here, he raised them here, he stayed here in South Milwaukee when he could’ve went anywhere,” Smith said. “He wrestled all over the planet.”

Smith then began pitching the idea of a statue to village officials like the bronze statue in Milwaukee of the character Arthur Fonzarelli, also known as “The Fonz” or “Fonzie,” from the TV show “Happy Days.” The statue is known as “The Bronze Fonz.”

“There’s a bronze Fonz, there should be a bronze Crusher,” Smith said.

In 2017, Smith needed about $40,000 to get the statue made and anticipated it would take several years so he set up a GoFundMe page for people to donate.

“I thought it would take decades (to raise the money) … I underestimated how much people still cared,” Smith said. “My plan was to put up this website, probably get some donations over the next 20 years of my career. We’ll see where we’re at and maybe I’ll be in a position where I can kick in the rest.”

Smith said in three months backers raised $50,000 and it wasn’t long after before they had an artist willing to make the clay statue and another to add to the bronze.

Lisowski died in 2005 from a brain tumor, but his memory will last for years in Wisconsin.

It was something that needed to be corrected, Smith said, but his work is not finished with Da Crusher.

“The next thing that needs to be corrected is he needs to be in the hall of fame,” Smith said. “When you compare some of the inductees, some of their resumes to his, I know it’s so subjective, but he belongs.”

At Da Crusher Fest, attendees signed a petition in the form of a banner asking for Lisowski to be in the WWE Hall of Fame.

“We’re going to send that to the WWE because he deserves it,” Smith said.

“He wasn’t just a super good wrestler, he was a really good citizen. Charitable, generous, just a good neighbor.”

To see Chris Smith, Mount Pleasant village attorney, get stunned in the ring, go to www.journaltimes.com.

Senior royals walk in the Duke of Edinburgh's funeral procession

Senior royals walk in the Duke of Edinburgh's funeral procession

Village Board members agreed the position is needed due to increased legal billings, open records requests and since the village is constantly involved in negotiation.