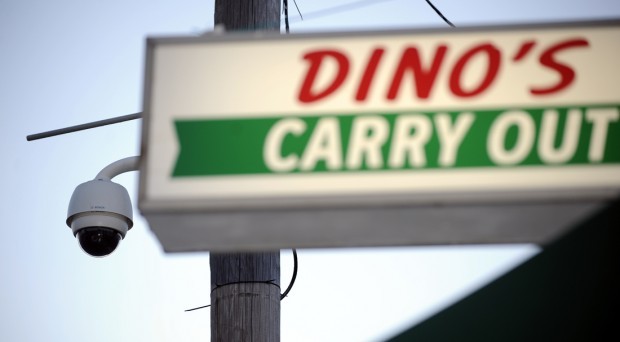 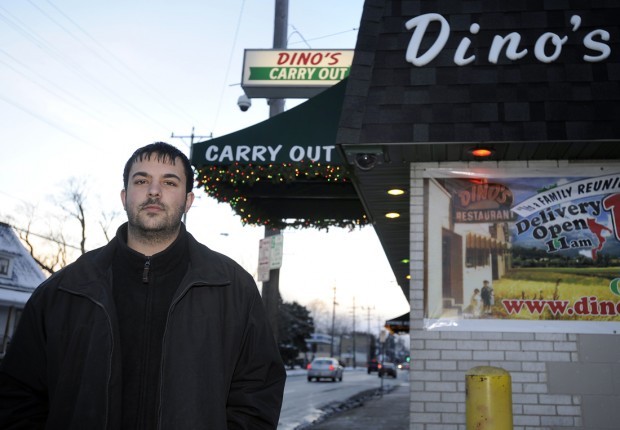 Dave Federer stands outside Dino's restaurant, 1816 16th St. on Friday, December 10, 2010. Dino's has video security cameras outside the restaurant. At least one alleged drug deal was caught on the camera. / Scott Anderson scott.anderson@journaltimes.com Buy this Photo at jtreprints.com
CHRISTINE WON

RACINE - Any would-be perpetrators - or pedestrians and motorists traveling down the 1800 block of 16th Street for that matter - should know there may be someone watching them.

A high-quality security camera with 360-degree visibility mounted outside of Dino's Restaurant, 1816 16th St., can be remotely accessed and controlled by anyone with a username and password to check out the goings-on.

The restaurant has four cameras to keep an eye on things, though only one is publicly accessible.

"It's to show people what it can do, what it can catch," said Dino's manager Dave Ferder. "So people know this is a great tool for the city and police."

Once a drug deal was caught on camera, Ferder said, and whoever was watching followed the interaction then alerted the police.

It's been up since July, to keep an eye or two on things.

At first there was a lot of site traffic where people would even get booted off after reaching the maximum limit of 36 users at a time, Ferder said, but lately there's been maybe two or three people on at a time.

The restaurant and Racine police also have their own logins and get first priority - for example, if there's a fight going on in the street and the police log on to monitor it, the system would kick off any other public user.

How much the fancy high-quality moveable things cost, Ferder would not say, though he did add that he bought them slightly used and gets Internet service for a discount.

There's a monitor at the restaurant bar that patrons can use. Sometimes Ferder said he puts on a show for the patrons, showing them how the camera moves, and often, the patrons will grab the joystick themselves.

He hopes the camera will showcase the benefits of security systems for a neighborhood.

Ferder notes that there are privacy features that black out residential windows so people cannot look into homes.

"(The neighborhood) is a lot better," said Eloisa Hernandez, a 41-year-old assembly worker who has lived in the neighborhood for five years. "(Knowing there's a camera) makes me feel safe."

Bashar Qedan, owner and manager of Twins Food Mart next to Dino's, agrees the cameras improve the safety of not only the customers but everyone in the area.

"Because people see it out there now and they know that it's watching."

A high-quality security camera with 360-degree visibility mounted outside of Dino’s Restaurant, 1816 16th St., can be remotely accessed and controlled by anyone with a username and password to check out the goings-on.

RACINE - One alleged would-be thief caught on the Dino's camera reportedly showed off for the camera before running away earlier this month.

A cook at Dino's, 1816 16th St., told police on Dec. 10 that he saw someone go into the unlocked passenger door of a car in the restaurant's lot. The cook said the man took an "armful of stuff" from inside the car, according to court records. He confronted the man, who the cook said tossed things back in the car.

By this time, a second employee had come outside and said "Smile, you're on camera" to the suspect. The suspect reportedly turned to the camera overlooking the lot, took off his hat, bowed, and then ran off.

The two employees reportedly ran after him. An officer arrested the suspect in the 1600 block of Murray Avenue, about a block and a half away from the restaurant.

Tyrone A. Earle, 37, of the 900 block of Racine Street, is charged with attempted misdemeanor theft and misdemeanor bail jumping. He has a long list of prior convictions, and could face up to four years of jail or probation if convicted of the new charges.

Dave Federer stands outside Dino's restaurant, 1816 16th St. on Friday, December 10, 2010. Dino's has video security cameras outside the restaurant. At least one alleged drug deal was caught on the camera. / Scott Anderson scott.anderson@journaltimes.com Buy this Photo at jtreprints.com
© Copyright 2021 The Journal Times, 212 Fourth St. Racine,WI | Terms of Use | Privacy Policy | Do Not Sell My Info
Powered by BLOX Content Management System from TownNews.com.
You don't have any notifications.