RACINE — When Art Howell joined the Racine Police Department, the city was entering one of its darkest times. Upon his retirement Wednesday after 37 years with the RPD, Racine has been experiencing record lows, year after year, in major crimes since Howell became chief of police.

Howell grew up on Davis Place, just south of Downtown Racine. As he was graduating from high school in 1980, a recession was sweeping across the Midwest. Stable industrial jobs went overseas or south of the border. Unemployment rates, especially among workers of color, shot up.

“All the jobs that the people in my neighborhood normally had,” Howell, who had worked at McDonald’s as a teenager, “they were gone.” His father was one of those who managed to maintain employment, at Case Corp.; one of the last things Howell cleaned out from his office this week was a toy Case tractor honoring his father, who died in 1995.

Hired at age 21 in 1984 by the Racine Police Department, the city was facing a crisis.

The crack cocaine epidemic arrived in the mid-1980s. It preceded what may have been the worst time in Racine’s history. Gangs, many of them coming south from Milwaukee or north from Chicago, set up shop in Racine: living expenses were lower and drugs could be sold for higher profit here, an inviting combination for vice.

Within three years of joining the RPD, he was one of the members of Racine’s first gang unit.

Still, violence and the prevalence of drugs continued to escalate. In 1991, the year an 11-year-old boy shocked the city by climbing atop the Dr. Martin Luther King Jr. Community Center to shoot and kill 21-year-old Darnell Williford, Racine’s violent-crime rate was higher per capita than Milwaukee’s.

Through his work trying to weaken gangs in the city, Howell quickly learned that the better path for stopping crime wasn’t busting the bad guys — even if that was part of the job — but through community-building.

Starting in 1995, Howell — who quickly became the highest-ranking black officer in the RPD, serving as a lieutenant at the time — and Lt. Steve Hurley led a group of officers who would take local youths fishing, getting them out of a sometimes crime-riddled neighborhood for even just a day.

At about that same time, a major shift in department thinking was starting to take place. Chief Richard Polzin brought in a new idea: Community Oriented Policing. Unlike conventional policing, the COP model aimed to reduce crime through problem-solving by addressing less visible factors like poverty and hunger, rather than simply arresting lawbreakers whenever crimes occurred, a strategy that Howell said fails to get to “the root of the problem. You can’t police your way out of this stuff.”

In the nearly 30 years since, six COP Houses placed throughout Racine — staffed by officers who work out of those houses, mentoring kids and making connections in communities — have been cited as a major contributor to plummeting crime rates. In the areas surrounding the first COP Houses, the city reports that violent crime dropped by as much as 70%.

Following violence that scarred city after city when people of color were killed by police — from Michael Brown in Ferguson, Mo., in 2014 to Freddie Gray in Baltimore in 2015, to Sylville Smith in 2016 in Milwaukee, as well as Racinians Donte Shannon on Jan. 17, 2018, and Ty’Rese West on June 15, 2019 — Howell has always credited the RPD’s community engagement for protests and demonstrations remaining mostly peaceful. Even when bricks were thrown at officers in riot gear and the Thelma Orr COP House on Villa Street was set on fire in the days after the killing of George Floyd last summer in Minneapolis, no significant injuries were reported.

Howell also led the department through the tragedy that was the murder of John Hetland, the veteran RPD officer killed on June 17, 2019 while trying to stop the robbery of Teezers Bar & Grill, 1936 Lathrop Ave. Hetland’s was the first line of duty death for the RPD in more than 35 years. There was also the coronavirus pandemic, through which the RPD was tasked with both carrying out its typical responsibilities while also enforcing the added restrictions put in place related to the pandemic.

“We’ve been able to grow partnerships … these are things that contributed to the lower crime rates. Certainly there’s more work to be done, as always,” Howell said. “I’ve seen us go from a stable community where there’s all these jobs, to a city attacked by drugs and crime and the crack epidemic to the 1990s where it was the worst ever statistically, to a period of restoration over the following 20 years that brought us to this point where we have the lowest Part 1 Crime Rate the city has ever seen.”

He said he wants no more than to “share in the credit,” despite having been one of only a couple RPD officers to have served from the 1980s all the way into the 2020s.

“You have to have the right people,” Howell said, joking that it doesn’t matter if Vince Lombardi is coaching your team if you don’t have the players who can live up to the task. “You feel like you’ve been part of something bigger than yourself when you have these outcomes are achieved through collective effort.”

Part of that decline is because the city’s population has dropped, from more than 95,000 in 1970 to just over 85,000 in 1980 as of to only about 77,000 now. Howell has repeatedly given his blessing to the city during budget processes to divert funds from staffing and internal studies to addressing reform and other city needs, keeping services available to residents and budgets balanced — another example of Howell’s community-first mindset, as opposed to one dead set on enforcing laws.

Racine Mayor Cory Mason called Howell “a transformational leader for the City of Racine” in an announcement Wednesday, declaring March 31, 2021, Police Chief Art Howell Day. “The Chief has always taken a progressive approach to policing. He focuses on prevention, innovation, community engagement, and partnership building, and because of that he and his department have built trust and support in the community.”

Howell has maintained respect from both sides of the political aisle, across skin colors and communities. Mason is a Democrat; Jonathan Delagrave, the Racine county executive and a Republican, said in a statement that the chief is “an incredible dedicated community servant” who “has admirably led the Racine Police Department through a variety of challenges with professionalism, pragmatism and grace.”

Added Police and Fire Commission President Robert Turner, a former longtime state legislator: “Chief Howell has served with great professionalism and impartiality which has gained him the respect and support from the citizenry, which has contributed to the reduction of crimes in Racine. The positive influence he’s had on the City will not be forgotten.”

Caron Butler, the Racine native and former NBA player who is now a philanthropist, businessman and assistant coach with the Miami Heat, had spent time behind bars as a youth before being given a chance to turn his life around by Sgt. Rick Geller, one of Howell’s fellow officers. Butler, too, thanked Howell upon his retirement, stating: “I just want to thank you for your unlimited commitment to our community. No matter the task you have always completed it with grace. I know the void of you not being Chief will be tremendously missed but I know you will stay actively involved in so many ways. Thank you for being the example we all needed. Seeing is believing.”

In April 2012, Howell broke the color barrier, becoming Racine’s first-ever police chief who wasn’t a white man. He thinks that that milestone being reached helped make the selection of Maurice Robinson, a black man and a career police officer with the Cincinnati Police Department, go more smoothly.

“If you were to go back to the 2012 chief search, it became bogged down and marred with race as a factor. If you look at my comments then, they’re going to be consistent with my comments now: I never felt like race should have been an issue back then, what should’ve been an issue was qualifications,” Howell recalled.

“Now, this time around, it was more about qualification than about race … we crossed that and we’ve crossed it with excellence,” the chief continued, looking back on his career and toward passing the reigns to Robinson.

Don’t expect Howell to disappear. He already has an (unofficial) job lined up for his “retirement.”

After spending much of his time as chief applying for grants to fund the department and its new endeavors, he’ll next be fulfilling a promise to his late friend, Rev. Jettie Cornett.

He identified that neighborhood as one that “fits our COP model.” Even in retirement, that mindset cannot be shaken.

A line of chiefs

Testimonials to Art Howell from local leaders. Page A3.

In addition to a salary of $143,416, Maurice Robinson may also be reimbursed up to $10,000 for moving-related expenses on the condition Robinson establishes residency in Racine within one year of his hire.

Social workers could be embedded with Racine Police Department

When the prospect of embedding social workers in police departments gained volume after the killing of George Floyd, many balked at it. But in his final months with the Racine Police Department, Art Howell has tried to set up the foundation for such a program.

A plan being considered Racine wouldn't send social workers in the place of cops to 911 calls, but social workers-in-training may be brought in to assist in certain scenarios in what could be a benefit for community members in crisis, stretched-thin police officers and taxpayers. 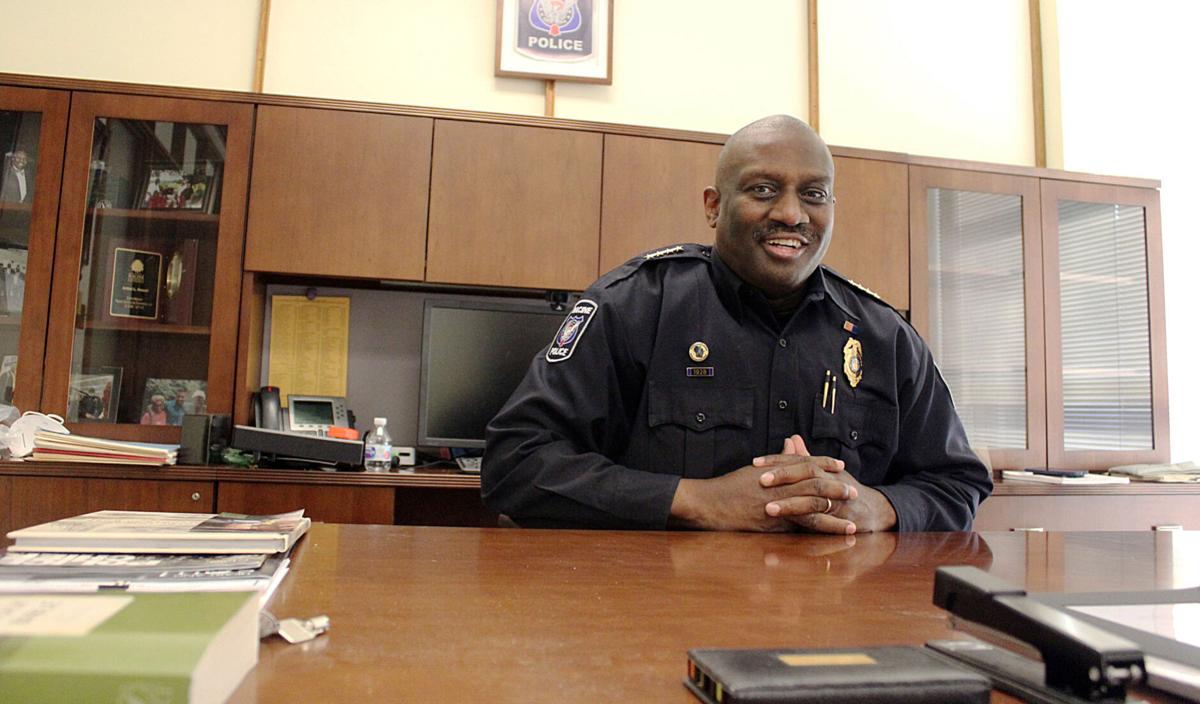 Art Howell smiles for a photo inside his office on Tuesday, his next-to-last day as the Racine's chief of police. 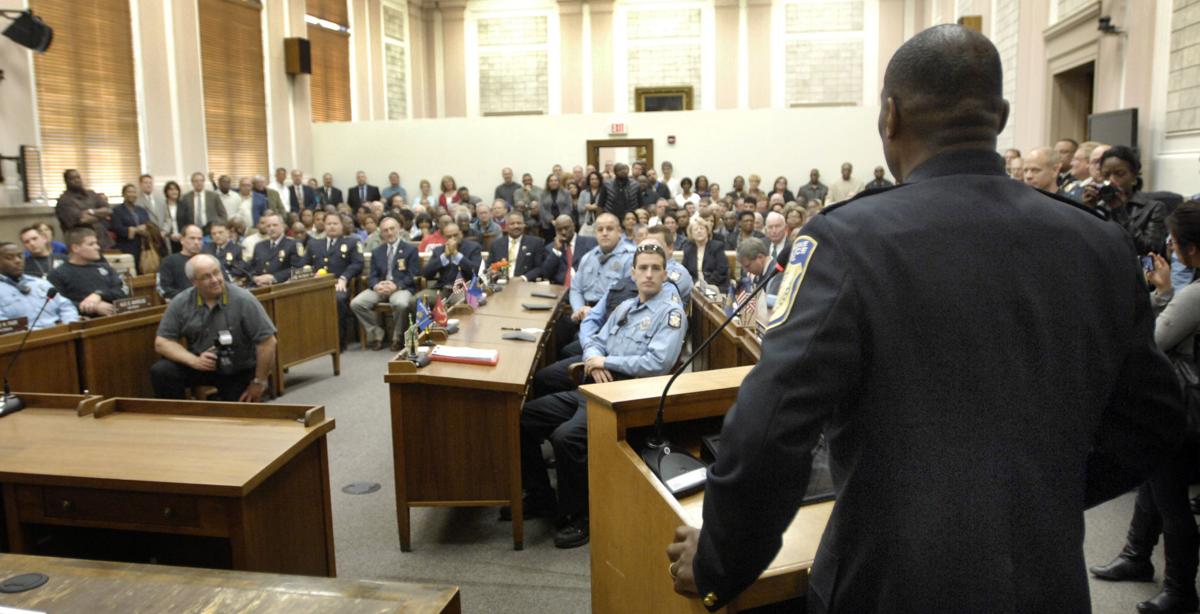 Racine Police Chief Art Howell addresses the standing-room-only crowd on April 2, 2012, after Howell, 49, was sworn in during a ceremony in the Council Chambers at City Hall. 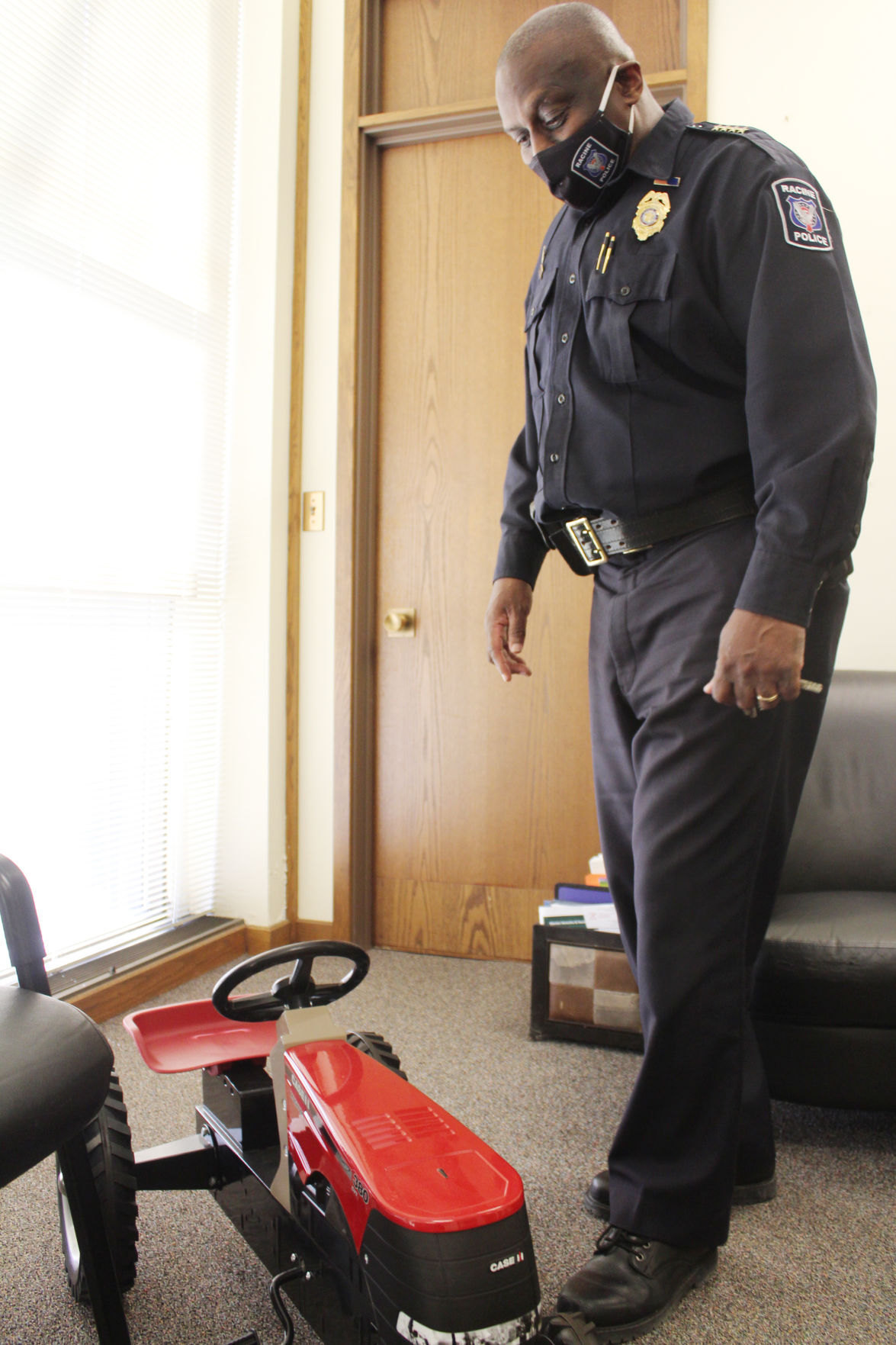 Art Howell's father, who died in 1995, worked at Case. Howell kept a miniature Case tractor in his office to honor his dad. 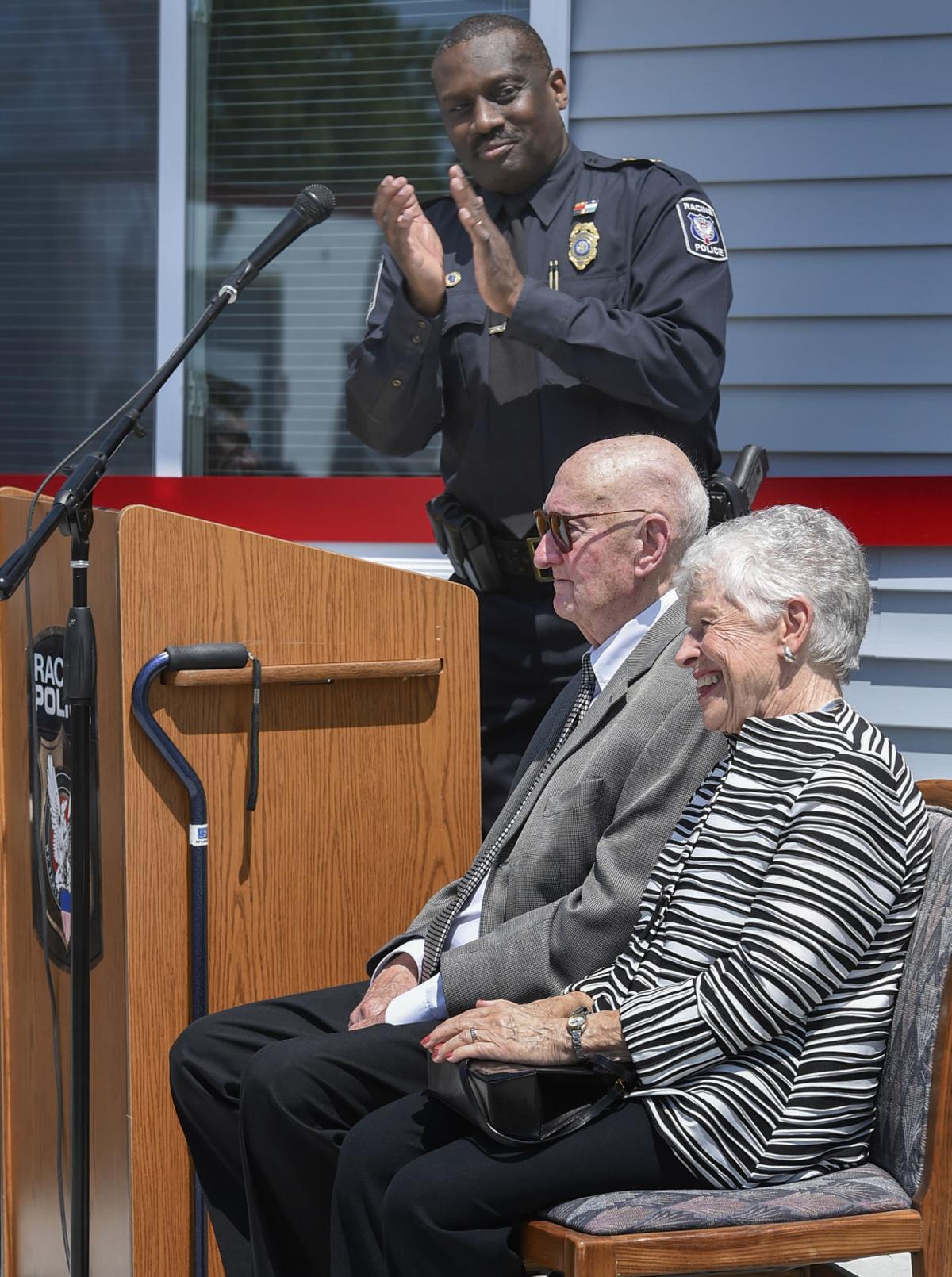 Racine Police Chief Art Howell applauds Ernest and Bernice Styberg during the dedication ceremony for former Jacato Drive Community Oriented Policing House, which was renamed after community supporters Ernest and Bernice Styberg on the afternoon of, July 9, 2015, at 2437 Anthony Lane. Along with renaming the COP house, Jacato Drive was renamed Anthony Lane during the ceremony.