He recalls moving high up in an interview process for a job, everything going well. But then the background check came back and showed a drug conviction from more than 20 years ago. Then the lines of communication went dead.

“A lot of people don’t like to hire felons,” Willis said. “I’ve been passed up for a lot of jobs … because of my felony.”

Prison Legal News reported in 2011, citing a study from the economic-policy thinktank the Center for Economic and Policy Research, “Research has shown that having a history of incarceration reduces a worker’s chance of being hired by 15 to 30% and reduces the annual number of weeks worked by 6 to 11 weeks, with the effect being more pronounced among minorities and under-educated ex-prisoners.”

During Gov. Scott Walker’s eight years leading the state, Willis had applied for a pardon. For two decades, he’d lived soberly and consistently been working. But Walker never showed interest in issuing pardons; Willis received a letter from the Walker administration stating his application had been “indefinitely suspended.”

To him, that sounded about as bad as when he had been sentenced to 10 months in the Racine County Jail after a house he was dealing crack out of was raided.

Willis is the first to say he was “no kingpin,” but made mistakes by staking his life on drugs and hustling on “the streets” as a 19-year-old. A Chicago native and son of a single mother, Willis came to Racine because he said he’d heard from family that it was “easy money.” Bags of cocaine that sold for $10 in Chicago were selling for $20 in Racine. Simultaneously, the Belle City was experiencing one of its highest crime rates ever.

“I thought the streets basically was the life, we had to take care of ourself,” Willis told the Governor’s Pardon Advisory Board during a virtual session on Feb. 12 regarding how he viewed his opportunities as a young man — a perspective he now sorely regrets.

The late Racine County Circuit Court Judge Dennis Barry told Willis that he was sentencing him to 10 months in the Racine County Jail because he wanted to send a message about how he didn’t want people bringing drugs from Illinois “to my city,” Willis remembered being told.

Told no, then yes

But then, “while completing my jail time … I got out with a whole new look at life,” Willis told the Pardon Advisory Board. “I was 19 at the time. I’m 47 right now. In between that time and now, I went back to school, got my certifications, have a 30-year-old daughter … my son is 20 right now (and) lives in Dallas, Texas, working for the City of Dallas.” He’s a grandfather too.

After the heartbreak of being rejected for a pardon by the Walker administration, Willis needed the encouragement of his fiancée to just to be willing to apply again after Gov. Tony Evers was sworn in in January 2019.

“It was just a drug case. It shouldn’t have been hanging around for so long,” he said.

Evers has reactivated gubernatorial pardons in Wisconsin with an apparent enthusiasm: In his first 26 months in the state’s highest office, he has pardoned 157 people for offenses ranging from the desire to hunt to just getting the label of “felon” lifted.

“From mistakes made as teenagers to desperate times as they struggled with homelessness or substance misuse, what we have seen overwhelmingly from applicants is a desire to move forward, give back, and make peace with their pasts,” Evers stated in early February as he pardoned 37 Wisconsinites.

Walker pardoned zero people in eight years. In Donald Trump’s four years in the White House, he pardoned 143 people and granted commutations to 94 people, while Barack Obama was the most active in this field than anyone in the past half-century having granted clemency to more than 1,900.

“Through a pardon, an individual is given the opportunity to make amends and give back to their community and our state,” Evers said in a statement Friday. “It continues to be extraordinary listening to the stories of so many who have paid their debt and deserve a second chance.”

On Friday, Evers announced 13 new pardons. Willis’ name was on the list.

When Willis got the email, telling him his felony was finally effectively going away, he said he started crying and couldn’t stop. When he called his fiancée to tell her the news, she thought something was wrong because he couldn’t get the words out through joyful tears.

With that felony gone, it means opportunity. It means it’s now easier to get promoted and to pursue new job opportunities, a criminally sized weight off the shoulders.

“The reason for my wanting this pardon today is for my pardon today is so I can get my lifelong job, so I don’t have to keep jumping job to job,” Willis told the Pardon Advisory Board. “I’d be in jobs two or three years, then all of a sudden something happens — ask me, I don’t know why.”

His previous job he had held for five years, but he was let go when COVID-19 hit. Quickly after that, he landed a job at A&E Incorporated in Racine, filling multiple roles on the floor, and it “is looking good so far.” He admitted it’s not his “dream job” — he wakes up around 3 a.m. daily to be at work by 5, and he’d rather be working with more people than machines — but it’s paying his bills.

He doesn’t have any more car payments; his restitution is paid off. With the felony gone, Willis said he’s more comfortable now than he’s been throughout his adult life.

“I’m just a law-abiding citizen now,” Willis said. “There’s no holding me back … I got opportunities now.”

Photos: Trump's latest pardons and commutations, in his final full month as president

Photos: Trump's latest pardons and commutations, in his final full month as president

Trump granted full pardons to Ramos and Compean, former U.S. Border Patrol agents who were convicted of shooting and wounding a Mexican drug smuggler near El Paso, Texas in 2005. Investigators said the agents never reported the shooting and tried to cover it up. They were convicted of assault and firearm charges and a judge in 2006 sentenced Ramos to 11 years in prison and Compean to 12 years. They were freed in 2009 after then-President George W. Bush commuted their sentences.

Angelos was 24 years old when he was sentenced in 2004 to 55 years in prison for bringing guns to marijuana deals, a sentence a federal judge was forced to impose because of mandatory minimum sentencing laws. He had no criminal record before he was convicted of selling $350 worth of marijuana to a police informant three times and prosecutors argued he was a gang member who carried a gun during two of those deals, though he was not accused of using or showing a weapon. The music producer was freed from prison in 2016. Utah Sen. Mike Lee petitioned former President Barack Obama to grant clemency to Angelos, as did the former federal judge who sentenced Angelos. Obama did not commute Angelos' sentence but the man was instead released from prison after receiving a sentence reduction in court.

The pastor, convicted of drug possession charges, was issued a full pardon, supported by South Carolina Sen. Tim Scott. The White House said he became a pastor at Life Changer's International Ministries after his conviction, mentors at-risk kids and led a prayer session at the United States Capitol after the 2015 shooting at a church in Charleston, South Carolina.

Costa is a dentist from Pittsburgh who pleaded guilty to a health care fraud charge related to false billing, served two years of probation and paid nearly $300,000 in fines and restitution. The White House said Department of Housing and Urban Development Secretary Ben Carson and former NFL football player Jerome Bettis had requested clemency for Costa and said Costa devoted much of his adult life to serving his community.

The 89-year-old pleaded guilty in 1952 — when he was 19 — to helping his wife's uncle illegally distill moonshine. He served three years of probation and paid a $250 fine. The White House said Crum, of Oklahoma, has maintained a clean record and a strong marriage for nearly 70 years, attended the same church for 60 years, raised four children, and regularly participated in charity fundraising events.

No Racine County Jail inmates currently positive for COVID-19, nor are any County Sheriff's staff

As of Friday, zero inmates or jail staff had been positive for 18 days, according to RCSO. Also, the Sheriff's Office's frontline staff reported to have been COVID-free for 42 total days as of Friday.

Anton House, a Racine man whose journey from drug dealer to college professor has inspired many, has been pardoned by Gov. Tony Evers. Now, he may use his new freedom to run for office.

The measure is known as "Marsy's Law" and is supported by crime victims who say it makes their rights just as strong as those of the accused. 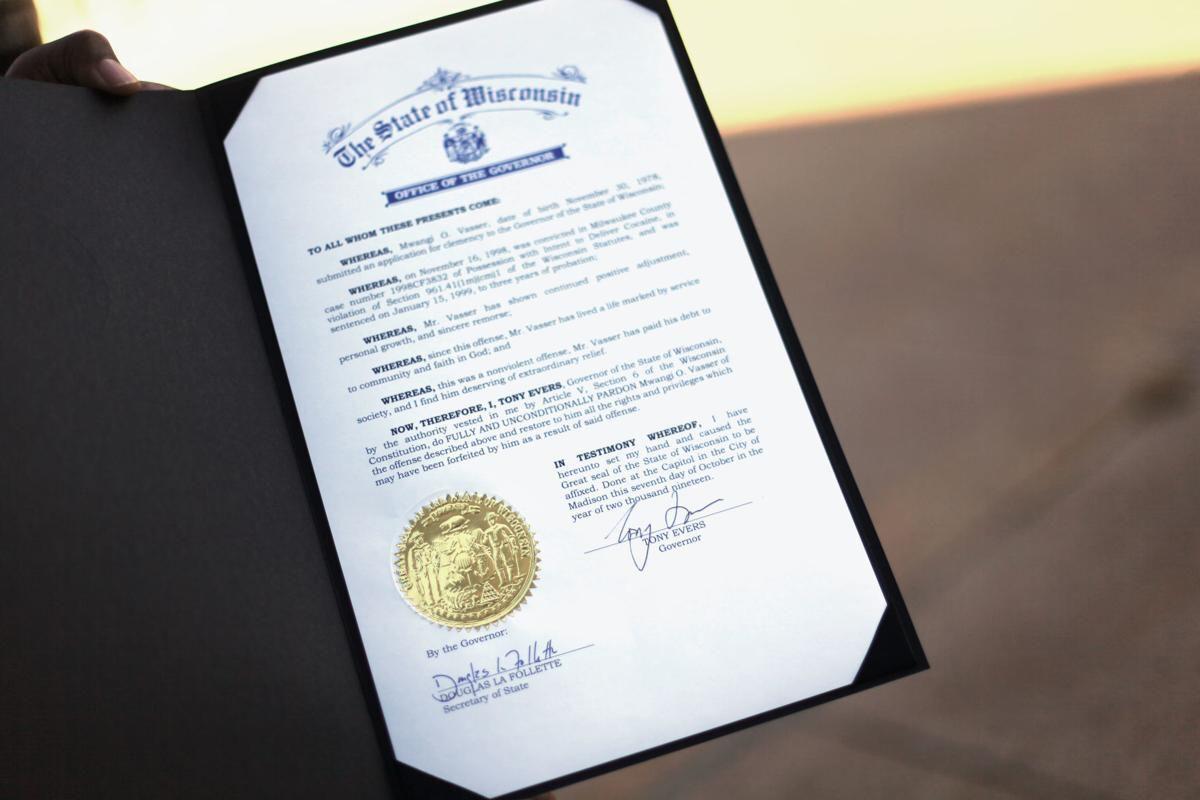 A Wisconsin gubernatorial pardon, like the one pictured here, will be mailed to Tyson Willis of Racine. He says he plans to frame it and copy it and display it as much as he can in his home. 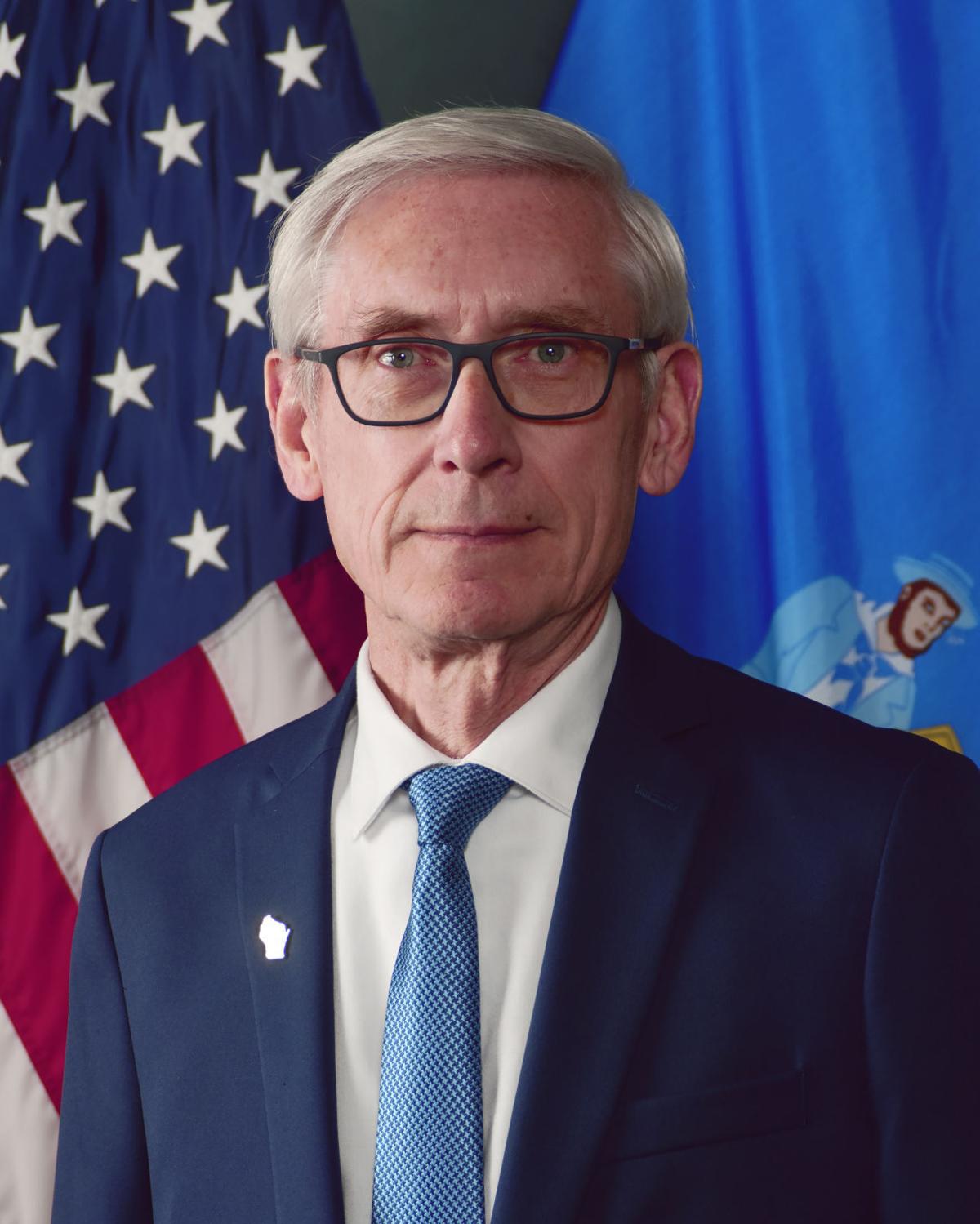