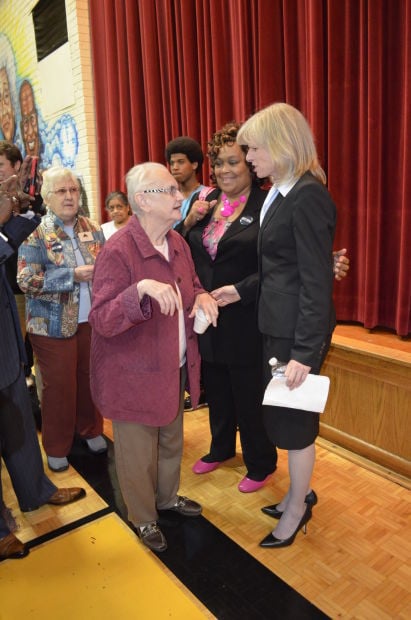 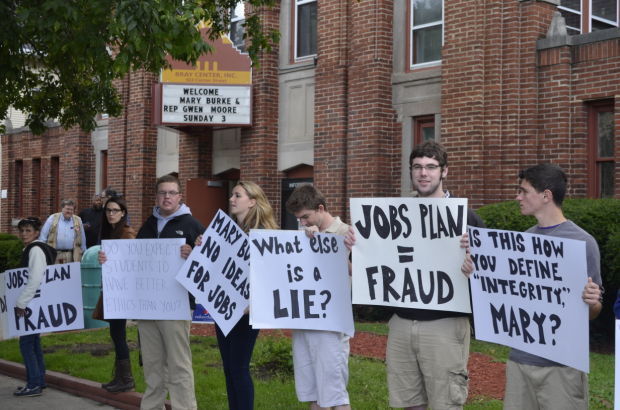 RACINE – Mary Burke on Sunday continued to deflect criticism about allegations that parts of her state job plan were lifted and unattributed from other candidate and independent reports.

And later the same afternoon, during a Racine appearance, the Democratic candidate for governor encouraged supporters to work hard to get out the vote on Nov. 4 to overcome what she described as “roadblocks” that state Republicans put in place through court-upheld voter ID legislation.

All that took place during and before a Sunday town hall meeting to a friendly audience of about 100 at the Bray Community Center, 924 Center St. While she received a warm welcome inside, a group of about a dozen youthful Republicans stood outside with placards trumpeting the plagiarism allegations. The group protested silently and dispersed without incident after Burke arrived and was rushed inside.

On Friday, Burke’s campaign acknowledged that consultant Eric Schnurer, who was hired by the campaign, used portions of plans he had prepared for other political campaigns throughout the country. The Burke campaign has since cut ties with Schnurer.

“I brought in ideas I thought would work here in Wisconsin and that have worked in other places to obtain innovative ideas on how we’re going to grow Wisconsin’s economy,” Burke told reporters before Sunday’s town hall meeting at the Bray Center. “But Eric should not have used the same language that he used in providing services to other clients.”

Further allegations were surfacing Sunday that more of Burke’s plan had been lifted from other sources, including a Harvard University study, but Burke said she had not had a chance to look into those.

Protesting Republicans outside the Bray Center declined to comment and instead sent a request for comment to state Republican party officials.

“Mary Burke needs a lesson in business ethics because even eighth-graders know that you shouldn’t copy the work of others,” Joe Fadness, executive director of the Republican Party of Wisconsin, said in an email to The Journal Times. “Burke must stop pointing fingers and immediately accept responsibility for putting forward a dishonest, plagiarized jobs plan.”

In her talk to supporters at the Bray Center, Burke said the Republicans were trying to use the plagiarism allegations to deflect attention from a U.S. Bureau of Labor Statistics report released Thursday that showed Wisconsin ranks 33rd in the nation in private sector job creation for a 12-month period that ended in March.

Burke’s Republican challenger in the Nov. 4 election, incumbent Gov. Scott Walker, has made job creation a key platform, promising when he was first elected in 2008 that he would bring 250,000 private-sector jobs to the state. Walker has acknowledged adding 100,000 jobs since he began serving as governor, but a monthly labor report shows the state lost 4,300 jobs between July and August.

Burke brought out reinforcements Sunday to mobilize supporters in her quest to unseat Walker. Appearing with her at the Bray Center were: running mate for lieutenant governor and state Sen. John Lehman, D-Racine; state Rep. Peter Barca, D-Kenosha; state Sen. Bob Wirch, D-Somers; and U.S. Rep. Gwen Moore, D-Wis., who sang a lively version of a number she called the “Scott Walker Blues.”

A recent Marquette University poll shows the race to be in a near dead heat, and Burke has said several times that Racine will play a key role in pushing her to victory. Moore, a Racine native, called the campaign a “battle royale” and Lehman said Burke’s victory was not just important to Wisconsin, but was important for the progressive movement nationwide.

After the speech to the crowd at the Bray Center, which largely mirrored the one she delivered on Aug. 2 at the Racine County Democratic headquarters, Burke took questions from the audience. She voiced support for raising the minimum wage to $10.10 and hour, supported restoring collective bargaining rights for public employees and said she would look at ways to reduce the prison recidivism rate.

RACINE — The debate over which candidate is better for creating jobs, which has been a central focus of the gubernatorial campaign, was in the…