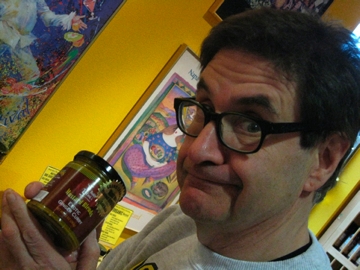 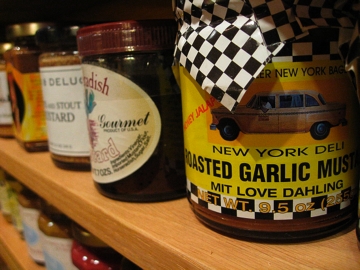 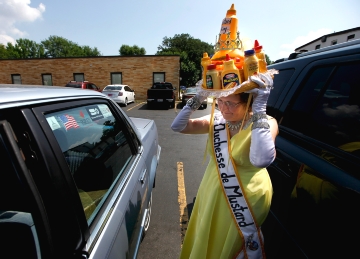 MIDDELTON - Barry Levenson stopped in his hotel hallway, looked both ways, then pocketed a tiny jar of room service mustard on a discarded tray.

Never mind that as an assistant Wisconsin attorney general 25 years ago, he was about to scale his profession's pinnacle and argue in front of the U.S. Supreme Court.

That lucky mustard jar — believed to be the only condiment to ever appear before the high court — has gone from Levenson's left pocket to a glass display case at the National Mustard Museum.

"How poetic," the placard reads, "that a jar of mustard would stand before a bench that once included Justices Felix Frankfurter and Warren Burger."

The museum, Levenson's goofy, tongue-in-cheek shrine to his beloved mustard, sits in a two-story brick building in Middleton, on the outskirts of Madison. There you'll find not only 5,400 different kinds of mustard, but you'll probably bump into Levenson, a Woody Allenesque nebbish with a slightly demented grin and a fully demented hobby.

"I could have done anything sane, but I decided to go off the deep end and collect mustard," he said, shrugging. "Welcome to my midlife crisis."

The National Mustard Museum resides in the basement; a tasting room and mustard shop occupy the upstairs. For a suggested $5 fee, you can wander around downstairs and check out mustards from 79 countries.

There's a passion-fruit/habañero mustard from Hawaii, a caramelized onion version from Maine and the reigning world champ, a ginger-curry concoction from Benicia, Calif.

Every spring, the Levensons round up foodies, chefs and dozens of other mustard tasters and judge the best in myriad categories ranging from honey to horseradish. Last year, the awards festival moved from Napa, Calif., to Middleton.

"There was mustard bowling and all kinds of activities," said Sara Leverson, who works at the Neena clothing boutique across the street from the museum. "I asked for ketchup at the hot dog stand and, oh, the look I got."

Levenson pointed her to a sign on the stand that informed everyone that mustard was free. Ketchup cost $10.

As much as Levenson loves mustard, he despises ketchup and mayo.

From the Red Sox to a yellow condiment

Down in his basement museum, right near the "Mustard Piece Theatre" that shows documentaries and old advertising clips, we found Levenson.

He grew up in Worcester, Mass., and came to Wisconsin in 1970 to practice law after experiencing some cold spiritual feet. He'd been accepted to the Hebrew Union College rabbinical school in Cincinnati and even worked as interim education director at Temple Israel in Minneapolis "for about 20 minutes" before ditching organized religion for law. He turned 63 in December.

He points out that at the Supreme Court mustard case, he won his argument 5-4, allowing authorities with reliable tips to search, without warrants, for weapons in the homes of people who are on probation.

"I think they got it wrong, but I was working as a prosecutor and they agreed with my argument," he said.

But why leave a successful law practice to collect mustard, with a business card that calls him a curator and Chief Mustard Officer?

It all started with baseball. Levenson grew up a die-hard Boston Red Sox fan. When the Bosox blew the 1986 World Series, Levenson said, he became despondent.

"Depressed beyond words and unable to sleep," he said, "I walked the aisles of an all-night grocery store, searching for the meaning of life."

"The prophecy came true," he said. "You've come to Middleton, Wisconsin, haven't you?"

A match made in Mount Horeb

His wife of 13 years, Patti, shook her head. Back in the late '90s, she'd listened to an interview with Levenson on Wisconsin Public Radio and figured that she'd invite him to host a mustard-tasting event in Milwaukee for her women's group. At the time, the mustard museum was in Mount Horeb, where Levenson lived. He moved the operation about 20 miles northeast to Middleton in 2009 to be closer to Madison.

"I'm a big foodie, so I called information and they'd never heard of Mount Horeb," she said. "It took about 50 phone calls to get him organized, and he kept asking how many single women would be there. I told him: ‘Who cares? You live in Mount Horeb. You are geographically undesirable.' "

Levenson charmed her, though, and after two years of commuting on the Badger Bus between Madison and Milwaukee, they wed in 1998. They have their own line of Oregon-made mustard called Slimm & Nunne, as in: The only chances of finding a better mustard are ...

You can taste all the mustards upstairs in the gift shop, where Levenson also sells a complete line of Poupon U clothing and souvenirs.

"A friend of mine told me a joke once: ‘Where do mustard makers go to college? Poupon U,'" he said. "I ran with it."

He hasn't trademarked the stuff, because Grey Poupon would have to sue him. Levenson knows his food law and teaches a course about it at the University of Wisconsin's law school.

Grey Poupon, which is part of Kraft Foods, actually agreed to sponsor his museum for $15,000 a year, figuring that a guy promoting their condiment can't be all bad. Just ask Oprah Winfrey. She invited the Levensons to her show about people who are passionate about what they do.

"We have two kinds of people who visit the museum," he said. "Those who lost a bet and those who are mentally deranged."

The 25-year-old National Mustard Museum is located at 7477 Hubbard Ave. in Middleton, a little more than 100 miles from Racine.

How to introduce pet cats to each other

How to introduce pet cats to each other

Ways to save on holiday shopping

Ways to save on holiday shopping

Five of the healthiest fruit juices

Five of the healthiest fruit juices