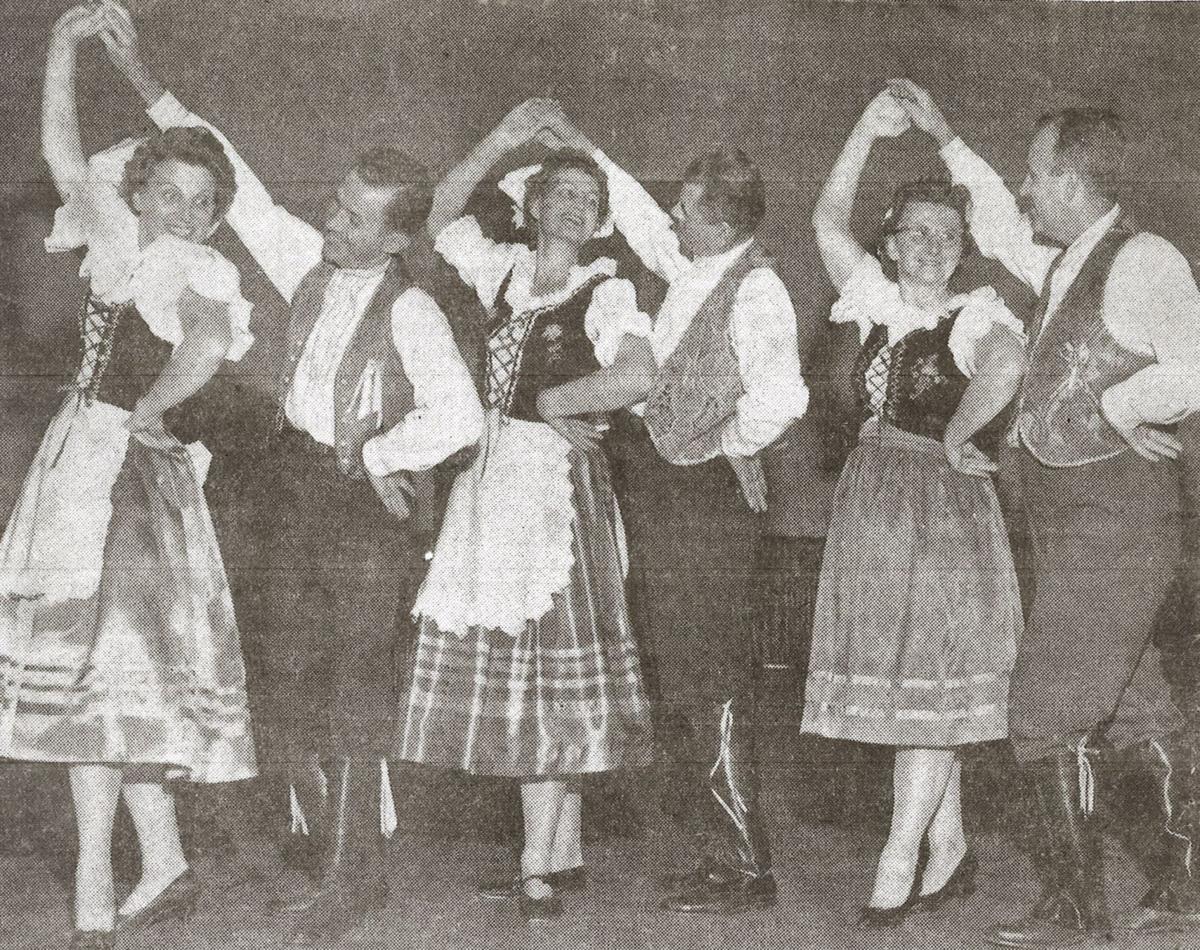 Through Sokol Mladocech, parent organization of the American Czech Club, Bohemian traditions were kept alive by such activities as folk dances. Pictured, from left, are Mr. and Mrs. Melvin Smerchek, Mr. and Mrs. George Kaplan, and Mr. and Mrs. Lloyd Larson. The women wore satin skirts, starched cotton blouses and black velvet "snerovacki," or weskits. Braid and embroidery detail both the women's garb, and similar weskits worn by the men. 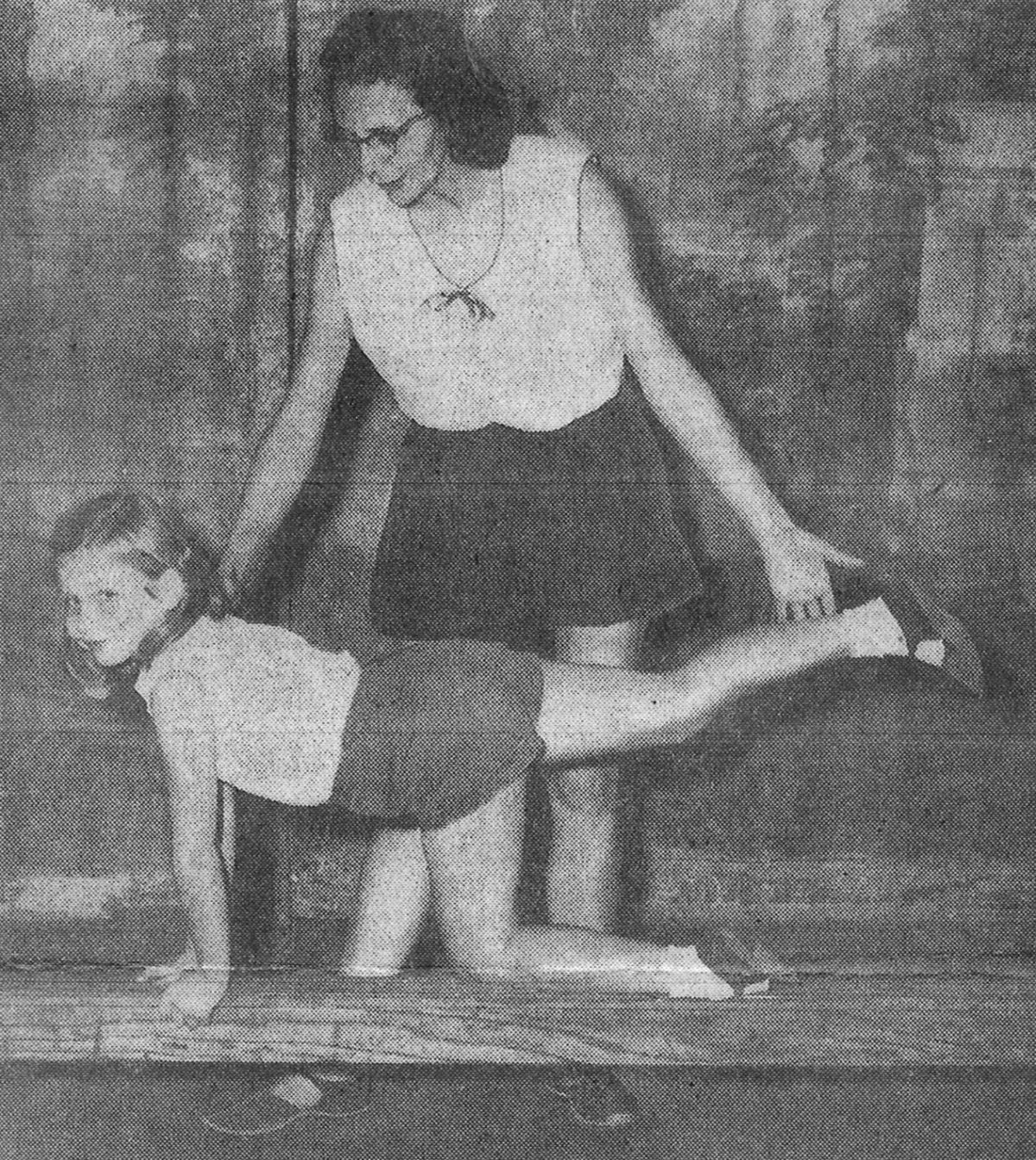 Mrs. Helen David, physical director for women, assists her 7-year-old daughter Robin in a pose on the low balance beam in this 1950's photo. 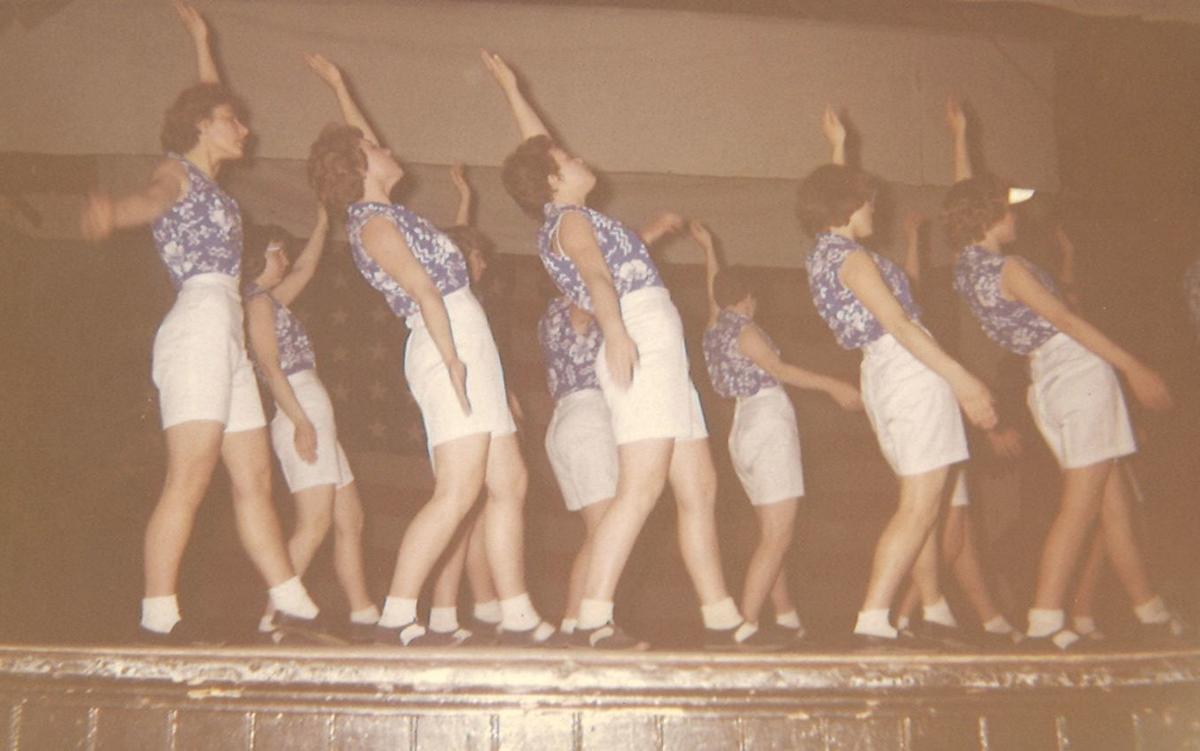 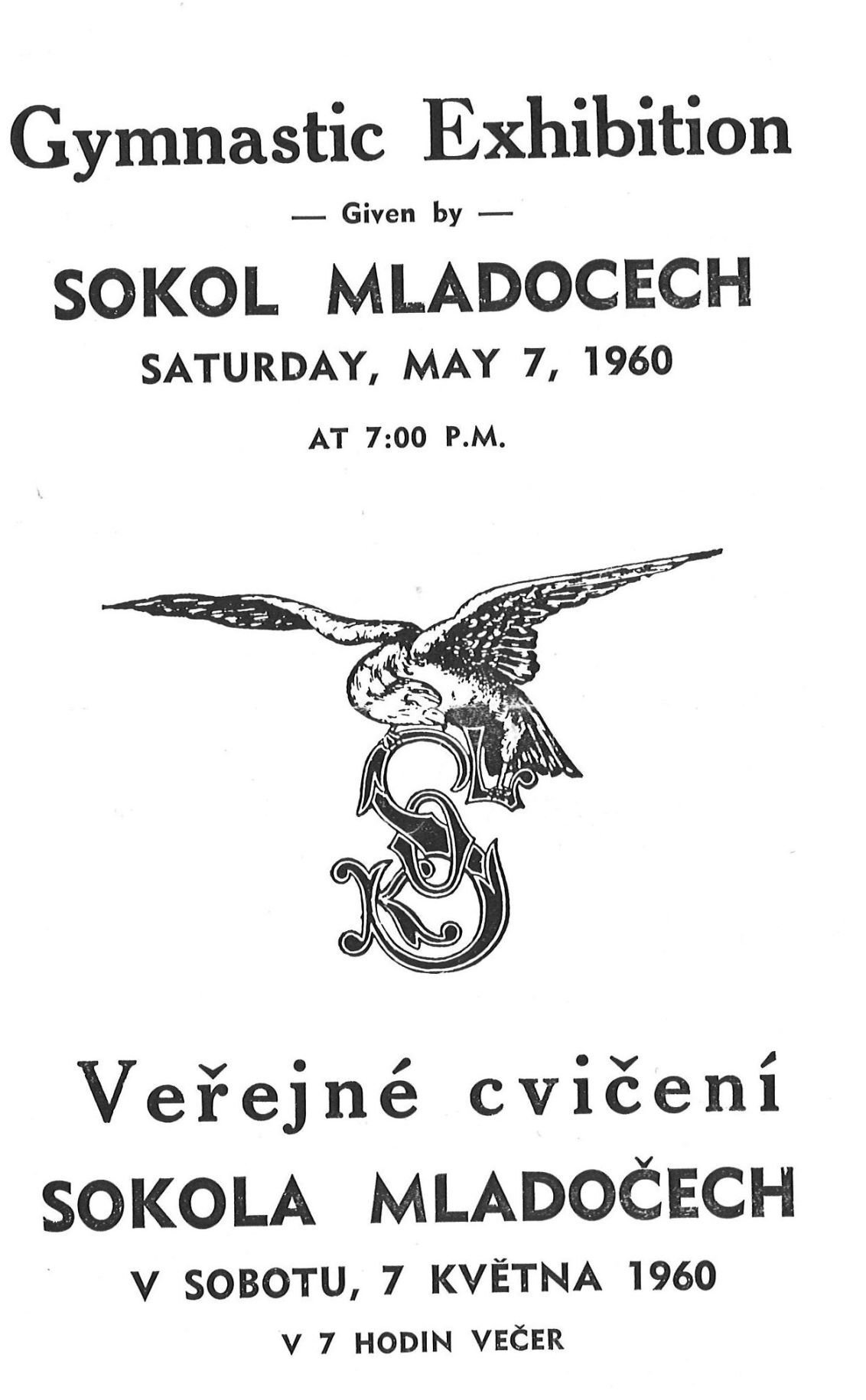 A cover of program for a Gymnastic Exhibition given by Sokol Mladocech from May 7, 1960, written in English and Czech.

It is likely that the word “Sokol” means nothing to you, but it was another part of my growing up years in Racine in the late 1950’s. My ancestry is 50% Belgian from my father and 50% Bohemian or Czech from my mother, whose maiden name was Lydia Makovsky.

Sokol Mladocech was a Czech cultural and physical fitness organization. Sokol is the Czech word for falcon, a bird which symbolizes courage, energy, independence and freedom. Mladocech means new or young Czech.

Sokol activities began in Racine in 1889 when about 17 men, recent immigrants from Czechoslovakia, began practicing Sokol drills. In 1892 the organization bought a building at 1313 Lincoln St. and named it Turner Hall, because gymnastic routines are referred to as turning.

Bohemian Turner Hall served not only Sokol Racine, but the community at large as both a gymnasium and social hall. My parents’ 25th anniversary was held there in 1951, just before my oldest brother and his friends were drafted into the U.S. Army during the Korean Conflict. My sister’s wedding reception was held there in 1968 just before her new husband and his twin brother were drafted into the Army during the Vietnam War.

Sokol was originally an organization for men and boys. In 1911 a women’s auxiliary was formed and eventually the men’s and women’s groups merged.

In 1928 the organization added a brick school building to the south so children of Czech heritage could learn about the culture, music and dance of their ancestors’ homeland. I never attended any Czech classes in the school.

Weekly physical fitness classes were held for all ages. Each class learned a new drill or calisthenics routine each year, synchronized movements performed to music. Sokol groups everywhere learned the same drill, so everyone could perform it together at “Slets” or exhibitions anywhere in the country.

Sokol Mladocech Racine hosted an annual Gymnastic Exhibition open to the public every year on the first Saturday night in May. Lunch was served after the program and dancing followed with music by a live band, such as John Sikora’s Bohemian Band.

The uniform for the females resembled school physical education uniforms, with sleeveless tops tucked into bloomer-style shorts with elastic legs. The Class I and II Girls wore red and white, the Junior Girls wore royal blue, and the Senior Women wore white blouses with red trim and navy-blue shorts with red and white attached elastic belt. Shoes were a soft black slip-on style.

Besides the calisthenics drill by each age group, the program included apparatus work on parallel bars, high-low bars, rings, pommel horse with handles, vault with springboard. Gymnasts could work on several pieces of apparatus on the stage at one time.

The Girls and Junior Girls also presented a special musical number — a different one each year. Flowing white dresses were sewn for a graceful dance we Junior Girls did to “Around the World in Eighty Days.” At the dress rehearsal, we found out that the material was virtually see-through under the bright stage lights so adjustments had to be quickly made.

When I was teacher for the Class II Girls in 1961, I taught them a special number using hula hoops as they pantomimed “The Christmas Song” by Alvin & The Chipmunks. My girls were cute little chipmunks wearing a brown leotard with a tail and ears. One of the special numbers that my younger sister Kathie taught her class was a routine to the Shirley Temple song, “On the Good Ship Lollipop.”

The finale of most programs was a lively polka or other dance by the American Czech Club couples. The women wore bright-colored satin skirts trimmed with ribbons, starched cotton blouses and black velvet weskits. The men wore similar weskits over their white shirts with dark pants tucked into knee-high boots.

I didn’t have the opportunity, but Kathie wore the traditional costume when George and Elsie Kaplan taught the Czech dances to the Junior Boys and Junior Girls. They did other dances dressed in outfits of Spain or Hawaii.

Members of Racine Sokol Mladocech participated in events in other cities and states. The term “slets” means “the coming together of.” The mass calisthenics were very impressive with hundreds of participants doing the same drill that all had learned in their local unit.

Slets always began with the flags and national anthems of the United States and Czechoslovakia and welcome speeches in both languages. I had low blood pressure and standing motionless during these long opening ceremonies sometimes caused me to faint. At large Slets I marched through the streets of the city with all the other gymnasts, but was encouraged to drop out as the parade entered the stadium. I watched from the sidelines as they stood in the hot sun during the official opening.

At some events we participated in competition on the various pieces of gymnastic apparatus. I was proud when I learned to swing myself up to straddle the parallel bars and do a shoulder stand or execute a forward somersault. The balance beam was my downfall (sometimes literally) so I didn’t score as high as some of my teammates.

According to a newspaper clipping, a team of six Racine girls from 13 to 17 captured the Junior title in the Central District Sokol Gymnastics competition in Chicago in 1963.

Eileen Smerchek took second and would advance to the inter-district meet at Cleveland in Sokol competition June 22-23. Other girls on the Racine team were Deanna Smerchek, Janet Smerchek, Kathie Clark, Linda Doughty and Barbara Larson.

At the same event, Cliff Vacek took second in the Junior Boys competition and would also advance to the Cleveland competition. Other boys were John Schafer, Calvin Vacek and Jon Christensen.

There were four of us from the Clark family who were members of Sokol Mladocech — my older sister Shirley, myself, my younger sister Kathie and our sister-in law Vivian, plus our Makovsky cousins — Jill, Jean and Janis. We women were all of one generation, but there were multi generation families who were longtime leaders and participants in the organization.

I still have programs from the annual Gymnastic Exhibitions in May of 1955, 1958, 1960 and 1961. Some of the family names I find are Bonady, Buran, Cerny, David, Fetek, Hayek, Kaplan, Kucera, Larson, Panek, Mostenan, Smerchek, Struhelka, Wtipil and Zalesak. They were the instructors, leaders and officers of Sokol Mladocech and the American Czech Club. I thank all of them and others over the years who supported this fine organization.

Rest of the story

A newspaper clipping reports that in 1959 the Racine Sokol Unit was at full capacity with more than 100 members taking weekly classes, according to Helen David.

As with many ethnic organizations, membership in Sokol Mladocech declined in later years. In 1976 the organization sold Turner Hall to two couples: Peter and Roberta Flex, and Robert and Debra Brown. They named their business Fle-Bro Hall and offered public hall rentals, catering and bar facilities.

Sokol Mladocech observed its 100th anniversary in Racine in 1992. It was in 1892 that the organization bought the building at 1313 Lincoln St. and named it Turner Hall. A plaque was unveiled during a ceremony at the Racine County Historical Museum. Present were Larry Nikl, 91, who was an officer in 1928 when the school addition was dedicated, and Charles Svitavsky, son of Vince Svitavsky, another 1928 officer.

On April 8, 1996, a fire broke out at the business now known as Rick’s Party House and Dance Hall. There were no injuries in the unexplained, pre-dawn fire, but it left only a portion of the exterior wall standing. Demolition workers from Sam Azarian Wrecking Co. tore down the remnants of the wooden building’s sagging north and south walls late that afternoon for safety reasons.

For many of us it was a sad ending to a memorable and happy chapter in our lives.

Lower your cholesterol by eating these foods

Lower your cholesterol by eating these foods

These everyday items are about to get more expensive

These everyday items are about to get more expensive

You should buy these items at yard sales

You should buy these items at yard sales

YORKVILLE — Racine County Breakfast on the Farm will be held in a drive-through format this year.

YORKVILLE — Three contestants will vie for the title of Fairest of the Fair when Racine County Fair organizers host the finals on Friday, June…

RACINE — About every two seconds someone is abused in the United States, according to a 2020 article on domestic violence published in the Rea…

What’s Going On is a fundraiser listing published on Saturdays in Community. Events held on a regular basis are not used. Announcements must a…

BURLINGTON — During the past year in Wisconsin, complaints to the Federal Trade Commission went from several hundred a month to a peak of 56,0…

RACINE — United Way of Racine County introduced its new Training and Technology Fund, which will officially open for applications on May 27, w…

Through Sokol Mladocech, parent organization of the American Czech Club, Bohemian traditions were kept alive by such activities as folk dances. Pictured, from left, are Mr. and Mrs. Melvin Smerchek, Mr. and Mrs. George Kaplan, and Mr. and Mrs. Lloyd Larson. The women wore satin skirts, starched cotton blouses and black velvet "snerovacki," or weskits. Braid and embroidery detail both the women's garb, and similar weskits worn by the men.

Mrs. Helen David, physical director for women, assists her 7-year-old daughter Robin in a pose on the low balance beam in this 1950's photo.

A cover of program for a Gymnastic Exhibition given by Sokol Mladocech from May 7, 1960, written in English and Czech.