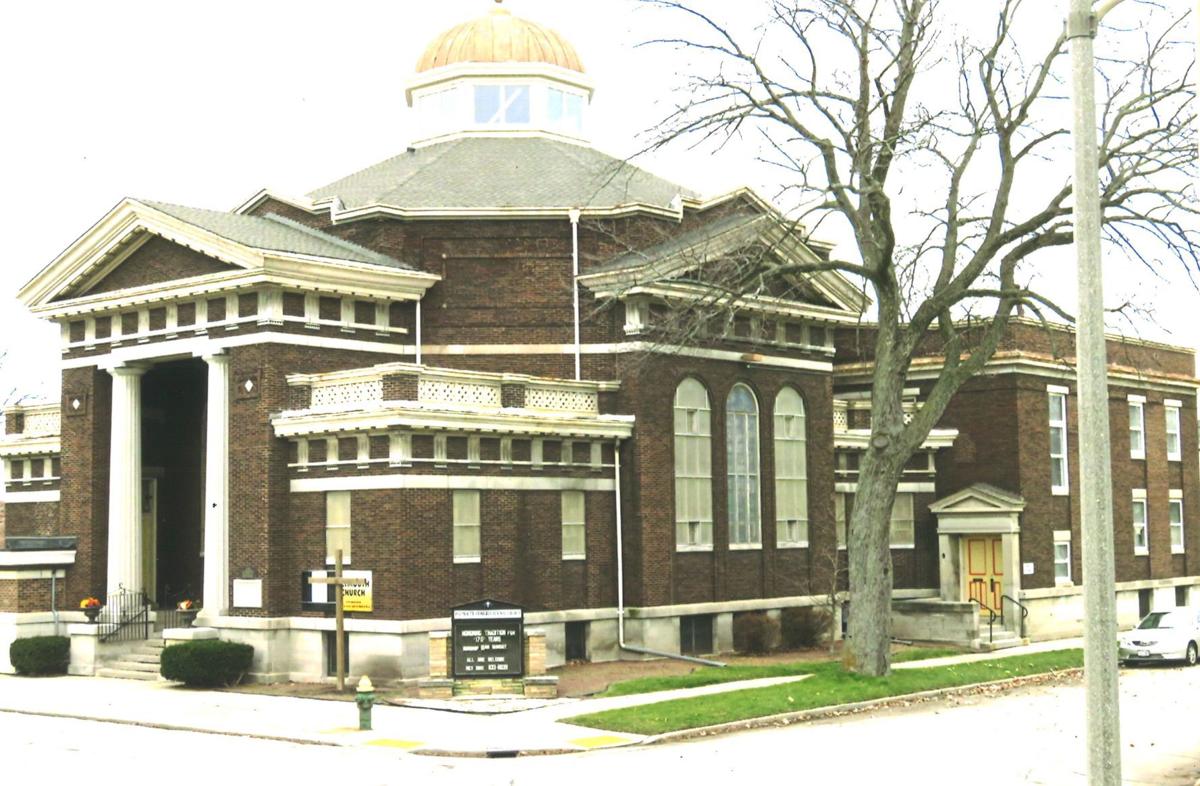 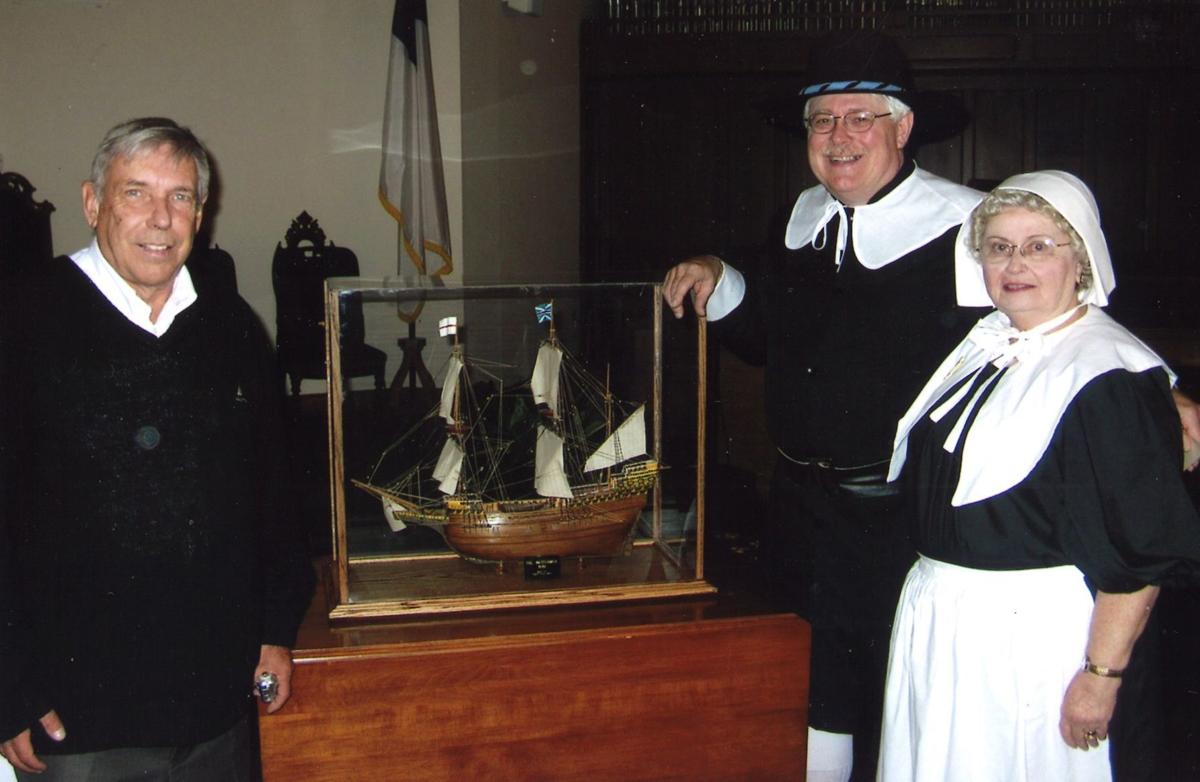 On Heritage Sunday in 2012, Bob Sturtevant, left, presents his scale model of the Mayflower to Plymouth Church for its 100th anniversary. Accepting are former Pastor Glenn Lawson and his wife, Linda.

RACINE — Plymouth Congregational Church, 1143 College Ave., will celebrate its 170th year in Racine on Sunday, Dec. 16. Friends, former members, and the general public are invited to attend the 10 a.m. service and stay to enjoy fellowship, shared memories and a potluck lunch.

Visitors may park in the north parking lot of the church located at 12th Street and College Avenue. The handicapped-accessible elevator at the northwest corner of the church provides direct entry to the unique sanctuary.

Often referred to as the Church of the Pilgrims, Congregational Christians hold that each congregation independently and autonomously runs its own affairs. That spirit of independence was important in many social reform movements including abolitionism, temperance and women’s suffrage. The church’s activism extended to education — the founding of Harvard, Yale and Dartmouth for men; Mount Holyoke, Wellesley, and Smith for women.

Plymouth in Racine has traditionally celebrated its Pilgrim heritage on the Sunday closest to the 11th of November — the date of the signing of the Compact. Parishioners enjoyed wearing costumes and “adopting” names based on Biblical virtues i.e. Faith, Steadfast, Honor.

Each settlement’s first structure was a church — the multi-purpose building of the time. Called a meeting house, it was the core of the community: A place of worship, social center, polling place, lecture hall, etc.

The church building at 12th Street and College Avenue is a rather rare example of octagon architecture — a form used for practical, aesthetic and theological reasons. Its Classical Revival style is distinguished architecturally by a unique balance of geometry and light. The eight-sided auditorium (sanctuary) and dome are symbolic of Resurrection and Regeneration; of Renewal and Revival.

In 2009, Plymouth was included in Preservation-Racine’s annual tour of historic sites. For its 100th anniversary in 2012, the church was certified by Preservation Racine and warranted as a Racine County Century Building.

Plymouth Congregational Church was founded by Welsh settlers in early 1848, pre-dating the City of Racine and the State of Wisconsin.

The original Racine Welsh Congregational Church was located at 814 College Ave. That building was sold in 1969 and was later moved to Villa Street between 12th and 13th streets. It has been remodeled and in continuous use as a church ever since.

In recognition of the congregation’s celebration of its 1143 College Ave. building, the governor proclaimed a Plymouth Congregational Church Day throughout the State of Wisconsin. Despite the changes, Plymouth has not altered its sole identity as a Congregational church.

The tradition of Congregational activism finds expression in the varied activities of the current congregation. Among them: Plymouth sponsors a child in Kenya, participates in Saturday Sack Lunch, supports Salvation Army programs and Thread by Thread, and has been involved with the Nativity on Monument Square since its inception.

From time to time, special collections are taken to support programs such as shoebox gifts, a mitten tree, school backpacks or HALO. Annually, Plymouth prepares a free Thanksgiving dinner for the elderly, homebound and alone; a free chili supper is held in the winter.

Plymouth is known for its annual sale of plain or pecan fudge at the Starving Artists Fair. Peanut butter fudge is made to order for Christmas. Orders should be placed by Dec. 12 by calling 633-6039. Pick up is on Dec. 16 after the service.

Plymouth holds church service is at 10 a.m. Sundays. For more information call the church at 262-633-6039, send email to plymouth@pymouthracine.org or visit the church Facebook page.

I saw a t-shirt, “I Speak Fluent Toddler” and I can relate.

RACINE — The Racine Community Foundation Board of Directors awarded $438,250 in fall 2021 grants. The 25 organizations benefiting from these g…

These events will be held in commemoration of Dr. Martin Luther King Jr. Day on Monday, Jan. 17:

State of the Downtown and Achievement Awards set Jan. 26

The presentation will occur at 5:30 p.m. on Wednesday, Jan. 26 at 555 Main St., the Johnson Building Learning and Development Center. It is free and open to the public; free drinks and appetizers will be served.

You have questions. I have some answers.

Happy New Year! We hope the first few days of 2022 have been wonderful for you.

RACINE COUNTY — The global pandemic and events of 2020 and 2021 have opened our eyes wider to the challenges of our world.

Watch now: Maintain healthy skin after a visit to Junoesque By Bree

Do we really gain weight in the winter?

Do we really gain weight in the winter?

PennyWise Episode 45: Four issues that can impact your home and wallet during the winter months

PennyWise Episode 45: Four issues that can impact your home and wallet during the winter months

On Heritage Sunday in 2012, Bob Sturtevant, left, presents his scale model of the Mayflower to Plymouth Church for its 100th anniversary. Accepting are former Pastor Glenn Lawson and his wife, Linda.