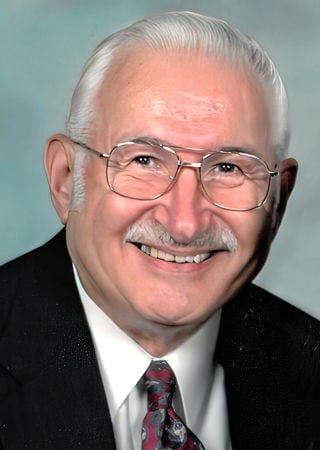 Donald A. Nienhaus, age 83, passed away peacefully in his sleep on Monday, September 13, 2021, at Ridgewood Care Center. He was born in Burlington, WI, on January 3, 1938 (first baby of the year), son of the late Alois and Rosella (nee Christman). Donald graduated from Burlington St. Mary’s High School in 1956.

Donald proudly served in the U.S. Army from 1956—1958, stationed in Germany. On November 9, 1963, he was united in marriage to Rita A. Herdt. They were happily married for 57 years, celebrating their 50th Anniversary at Infusino’s Restaurant with many family and friends.

Donald was employed at Jacobsen Manufacturing, Racine Hydraulics, Rexnord, Jacobsen Manufacturing (again), Strategm, and Sam’s Club. Donald was a proud member of the Knights of Columbus for 65 years, obtaining the rank of 4th Degree. He enjoyed bowling, dartball, dominoes, sheepshead, going on family vacations, going on trips across the state with Rita, Knights of Columbus bus trips to Musquakee, and was a proud supporter of the Brewers, Bucks, Packers, and Badgers. However, he was most dedicated to supporting his sons in sports, school, Boy Scouts, and cards. He really enjoyed spending time with his family, especially his grandkids.

The family wishes to extend a special thank you for the very dedicated and compassionate patient care given to Don by the staff at Ridgewood Care Center.Dear, we love you and will miss you dearly until we all meet again someday.There will be a visitation held at St. Paul the Apostle Church on Friday, September 17, 2021, from 10:00 a.m. until 11:00 a.m., with Mass beginning at 11:00 a.m. In lieu of flowers, memorials are asked to be made to a charity of your choice.

Study: Americans don't feel like adults even if they are

Study: Americans don't feel like adults even if they are