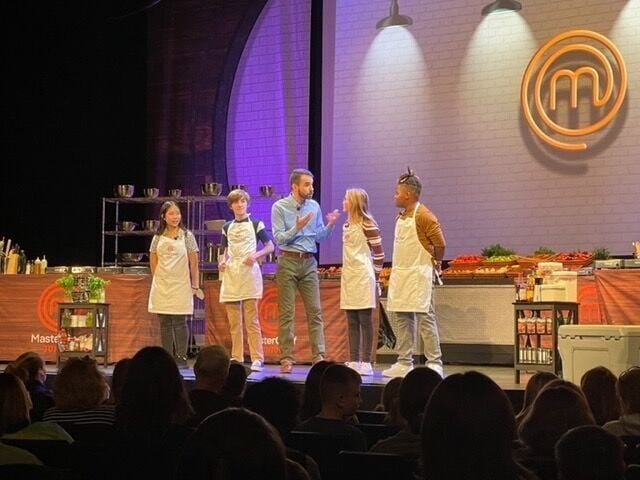 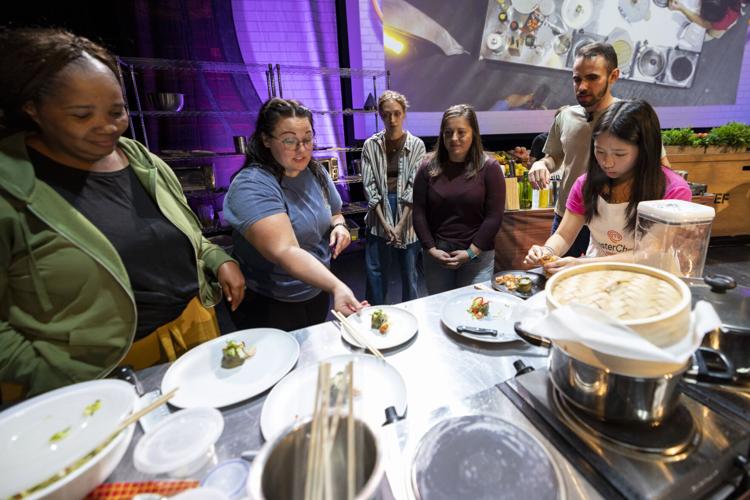 Sous chefs try a dish made by Liya Chu, right, during a rehearsal for MasterChef Junior Live at the Orpheum Theatre Tuesday. 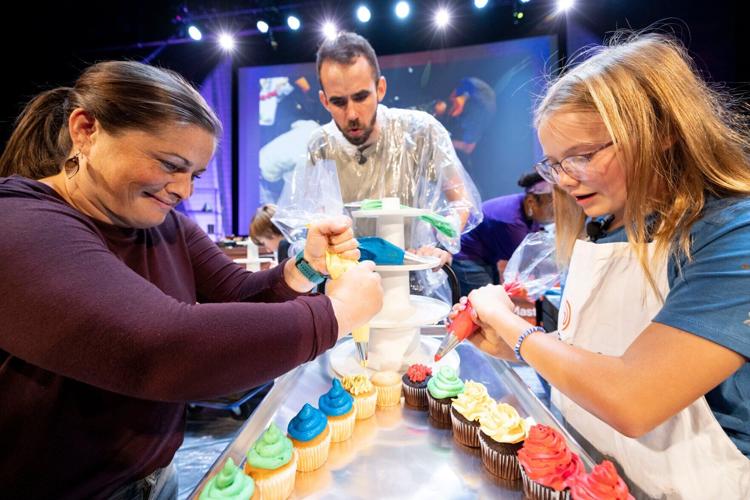 Kelsey Anderson, left, and Molly Leighninger, right, compete in a cupcake decorating contest during a rehearsal for MasterChef Junior Live.

The secret ingredient in “MasterChef Junior” must be high-fives.

At the live version of the popular reality show, host Mac Dassatti topped every cooking challenge with at least one or two. After the fifth or sixth time Thursday night, they seemed a little predictable, but didn’t deter from the fun pre-teen audience members had watching the TV contestants cook.

Because the most recent edition of the Fox show was taped three years ago, it was a surprise to see how tall winner Liya Chu and runner-up Grayson Price had gotten. They were more mature and clearly up to the timed cooking challenges. Giving them a run for their spices: Molly Leighninger and A’Dan Lisaula, two fan favorites.

Kicking off their current tour at the Orpheum Theatre, the live show had plenty of taped messages from Gordon Ramsay and other familiar faces. Audience participation was on display, too, as the four whipped up appetizers, main dishes and desserts.

While younger audience members might not have understood what it took to make a great ratatouille, they were more than willing to cheer every ingredient tossed on the pros’ cooking stations.

Dassatti—who spoke almost as fast as Billy Eichner – kept the action moving and frequently upped the ante with “mystery” boxes. The four did a goofy main course swap, then settled into cooking. Local chefs helped them prep the food and produce main dishes in less than an hour. Lisaula’s chicken and waffles earned raves from the taste testers (and made those in the theater’s front rows hungry); Chu’s scallops should have been included on a local restaurant’s menu.

Dassatti talked throughout and might have curbed some of the enthusiasm when approaching the four stars. Rather than ask softball cooking questions, he should have quizzed them about the post-“MasterChef” years: Do they still cook? What have they learned from the show? How did they keep a secret for three years?

Cooking tips would have been good, as well, and another, less-Nickelodeon-level dessert challenge wouldn’t have seemed so anticlimactic. (Kid partners stacked cupcakes on the heads of the four stars.)

All four displayed plenty of charisma and should have been able to display more of it in the course of cooking.

An overhead camera bank (which let the audience watch the prep work) was cool but underused. When “Live” stopped for an intermission, the junior chefs were still cooking. Watching them on the big screen might have been a great way to make the break more than a free-for-all for energetic kids in the audience.

Because it’s early in the show’s run, “MasterChef Junior Live” will likely rise and fall based on the recipes they trot out from city to city. A declared winner might have been nice. But it was just fun seeing Liya, Grayson, Molly and A’Dan in person. They’ve got skills. We’re just not sure how we could get them, too.

Betty White’s belongings up for auction: Here are some items you could own

Among the highlights of items from the estate of Betty White are scripts from notable TV episodes, including Part 1 of "The Golden Girls" finale.

Actress Selma Blair, who’s battling multiple sclerosis, continued to amaze with a “Jailhouse Rock” that included a cartwheel and splits. Yeah, they might not have been part of a traditional jive, but they certainly impressed.

Katie Couric, who underwent colon cancer screening on the "Today" show in 2000, says she was diagnosed with breast cancer on the first day of summer.

During the show's first year, creator Quinta Brunson had the luxury of crafting the episodes before any started airing. “This year, we will be in a different situation where we will still be filming and writing when the show starts airing,” she says.

'So Help Me Todd,' starring Marcia Gay Harden, springs from a son's quest for justice

When producer Todd Prendergast's stepfather disappeared in 2005, “I saw my mother collapsing, very upset, very emotional,” he recalls. “Something I called my ‘Incredible Hulk moment’ just kicked in and I said, ‘We’re going to find this guy.’”

If you gave “Murder, She Wrote” a contemporary spin and added in plenty of new media, you’d wind up with “So Help Me Todd,” a fun new mystery that brings out the best in Marcia Gay Harden and Skylar Astin.

While it isn’t necessary to be a fan of the first “Quantum Leap” to enjoy this one, “there is an enormous amount of backstory and mythology from the original show,” Executive Producer Martin Gero says.

Worth Watching: Everyone’s a ‘Suspect,’ Back to ‘La Brea,’ Niecy Nash Is the New ‘Rookie,’ and More

British crime drama "Suspect" sends a detective on a dark night of the soul as he seeks his daughter’s killer. Niecy Nash-Betts headlines "The Rookie: Feds," a spinoff about the FBI’s oldest rookie.

Shakira to stand trial on tax rraud charges in Spain

Post Malone returns to the stage after recent fall

Post Malone returns to the stage after recent fall

Sous chefs try a dish made by Liya Chu, right, during a rehearsal for MasterChef Junior Live at the Orpheum Theatre Tuesday.

Kelsey Anderson, left, and Molly Leighninger, right, compete in a cupcake decorating contest during a rehearsal for MasterChef Junior Live.