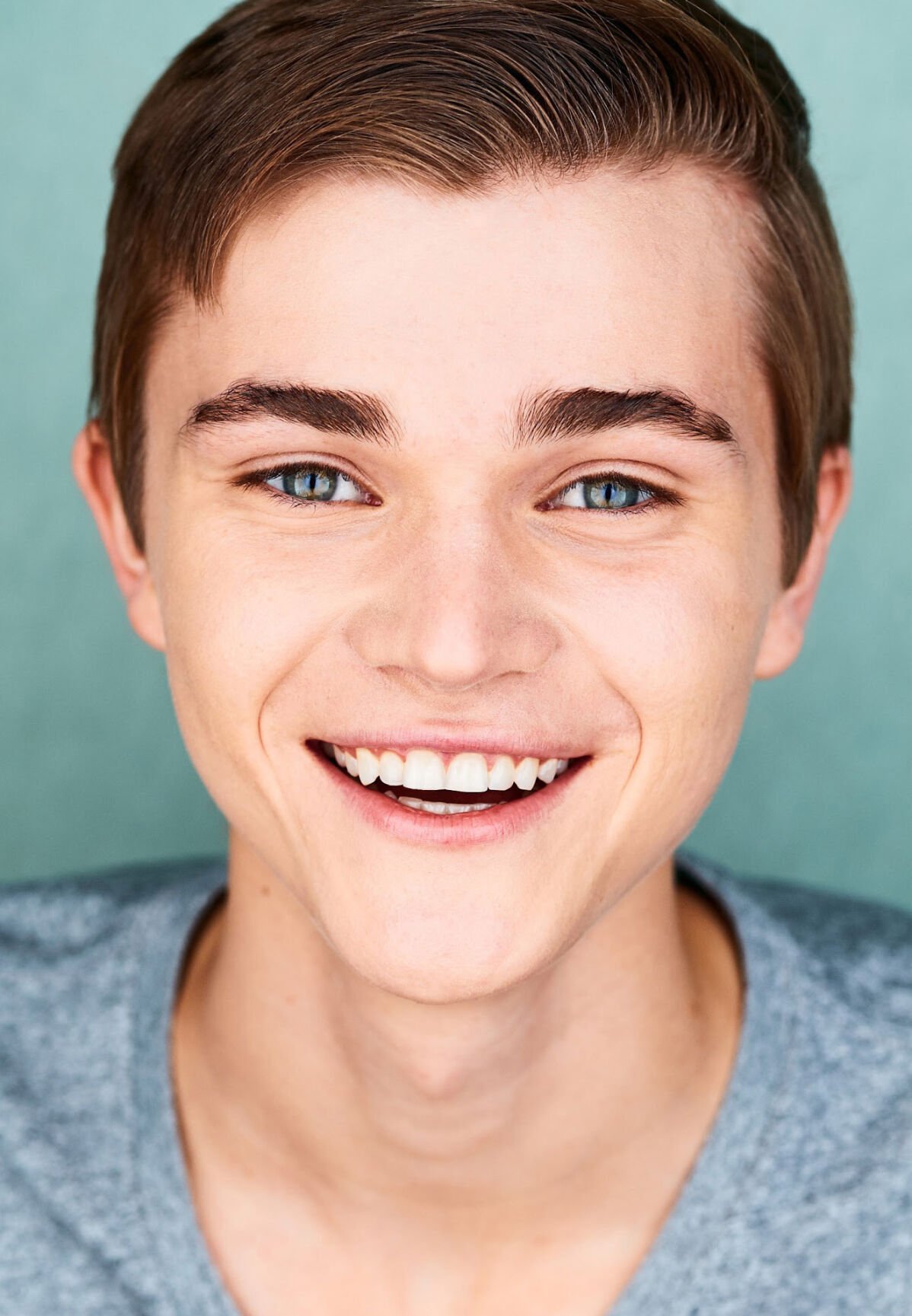 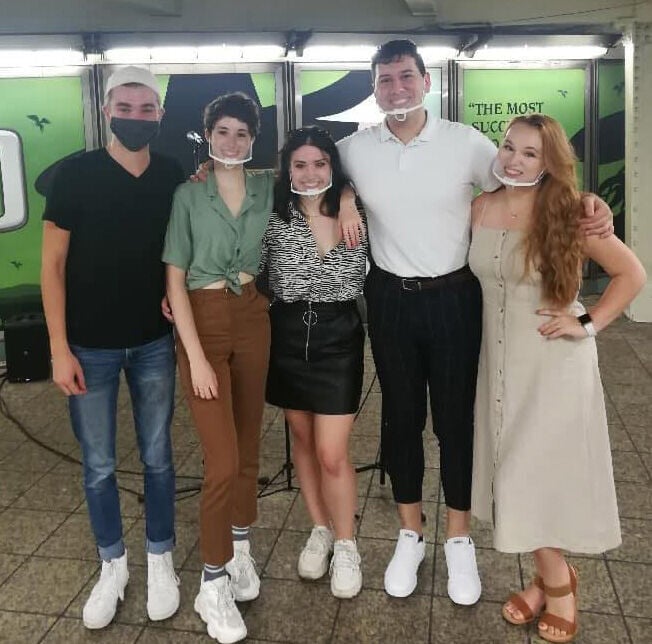 From left: Jack Porubsky, Alissa Bush, Rachel Barsness, Ruben Ayala and Emma Imholz pose for a picture at a performance at 42nd Street Station in New York City. Porubsky and Barsness, both from the Sauk Prairie area, are performers and have team-lead roles with NYC Street Theater, which hosts outdoor performances around the city and started in response to the COVID-19 pandemic. 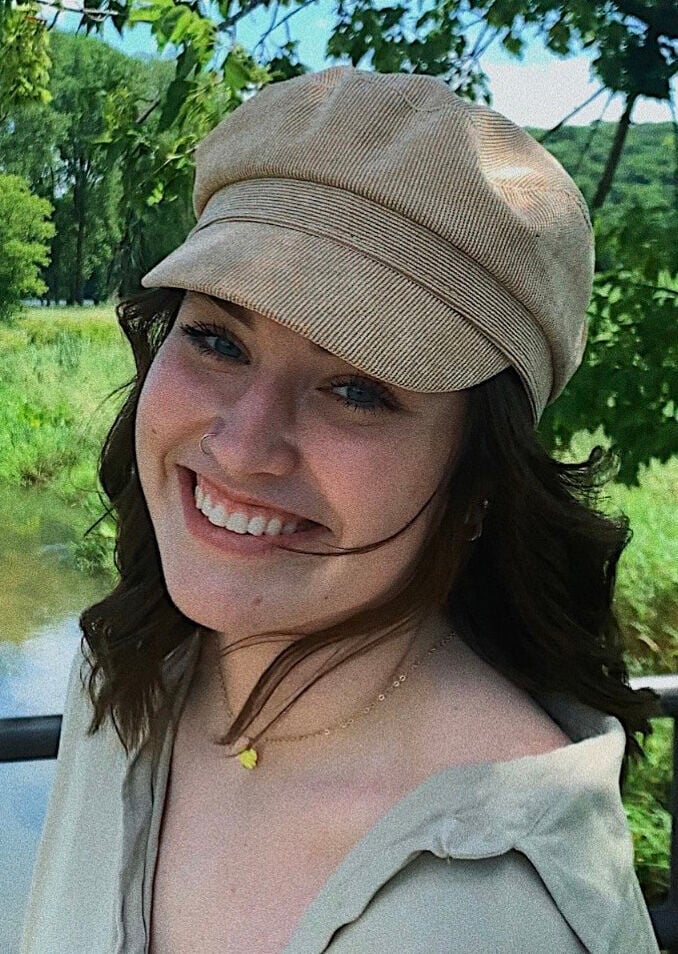 While Broadway and many other theater performances in the Big Apple are at a standstill due to COVID-19, Rachel Barsness and Jack Porubsky are keeping busy as performers and team leaders of the newly-formed NYC Street Theater. The group hosts free outdoor performances around New York while also meeting health restrictions to reduce the spread of the coronavirus. Both are managing their roles with the organization while also auditioning for acting jobs.

Barsness and Porubsky graduated from Sauk Prairie High School in 2018 and quickly moved to New York City to study at the American Musical and Dramatic Academy. Both graduated from the academy in 2018. Porubsky is still attending school to obtain his Bachelor of Fine Arts degree, with a minor in Business Management, and plans to graduate in 2022.

Barsness' high school accolades include a Jerry Award for a female lead in a musical for her performance in "9 to 5 the Musical." Porubsky said he received 25 different awards for solos and show choir performances throughout his high school career and was second runner up for the Jerry Awards for his role as Chip in "Beauty in the Beast" and the Prince in "Cinderella."

Barsness said their experiences at Sauk Prairie High School, from show choir to marching band and musicals, were “stepping stones” to where they are today.

“We we’re very lucky with the opportunities we were given through Sauk Prairie High School,” she said.

Porubsky and Barsness said they still keep in touch with the high school’s vocal music teacher, Matt Brennan, and assistant director for the high school’s musicals Meg Aspenwall. They said both teachers have been instrumental in helping them learn the ropes in the challenging theater industry. They also credit their experience at the American Musical and Dramatic Academy for preparing them for the real word experience as performers.

The actors said they had call backs lined up for a cruise line when COVID-19 cancelled those plans. Due to the virus spreading throughout the nation, theaters were shut down to limit large gatherings.

Both Barsness and Porubsky were hired by Alissa Bush, who attended the American Musical and Dramatic Academy with both of them. According to the NYC Street Theater website, Bush is the executive director of the organization and started it earlier this year in response to the global pandemic and its impact on the theater industry. Barsness is the head of marketing/social media for the organization while Porubsky is the musical director, in addition to their duties as performers.

“This first year was kind of our test run to see if there was interest in it,” Porubsky said.

He said the NYC Street Theater's plan is to open auditions to other performance schools in New York in January.

The group follows state restrictions to host outdoor performances, including wearing face shields and setting up a perimeter to maintain six feet of social distance from the audience and performers, he said. The group has been hosting performances in subway terminals due to COVID-19 restrictions on sound permits, Porubsky said. There's a donation page on its website.

“We’re really just having a blast getting music theater back out into the streets of New York,” Porubsky said.

Many of their performers hail from Virginia, South Carolina, Illinois, Washington state and Wisconsin. While the organization has its own performers, Porubsky said the hope is to invite guest performers in the near future.

“One of our goals is just kind of be a building block for people’s careers and be something that people are proud of being a part of,” he said.

Thinking to the future, Porubsky said his “book is open” to many industry opportunities from acting on Broadway to managing and working for music agencies. Barsness said that anyway she is working in theater and making a stable, living she will be satisfied, whether as a hairdresser, performer or theater manager. She also wants to help grow NYC Street Theater.

“As long as I’m working in a theater, I will be happy,” Barsness said. “I think my end goal is to be a performer with a show and to expand NYC Street Theater enough to make a living and to expand this to so many other performers and give them opportunities.”

This will be the first return visit since the 2017-18 holiday season.

'A Christmas Story' on stage at Theatre Guild

RACINE — After more than a year without any main stage plays and musicals at the Racine Theatre Guild, “A Christmas Story” will bring nostalgi…

'The Thanksgiving Play' to be staged at UWP

SOMERS — “The Thanksgiving Play” by Larissa FastHorse will be staged Dec. 10-12 in the Main Stage Theater at UW-Parkside, 900 Wood Road.

Halsey in no rush to make another album

Halsey in no rush to make another album

From left: Jack Porubsky, Alissa Bush, Rachel Barsness, Ruben Ayala and Emma Imholz pose for a picture at a performance at 42nd Street Station in New York City. Porubsky and Barsness, both from the Sauk Prairie area, are performers and have team-lead roles with NYC Street Theater, which hosts outdoor performances around the city and started in response to the COVID-19 pandemic.