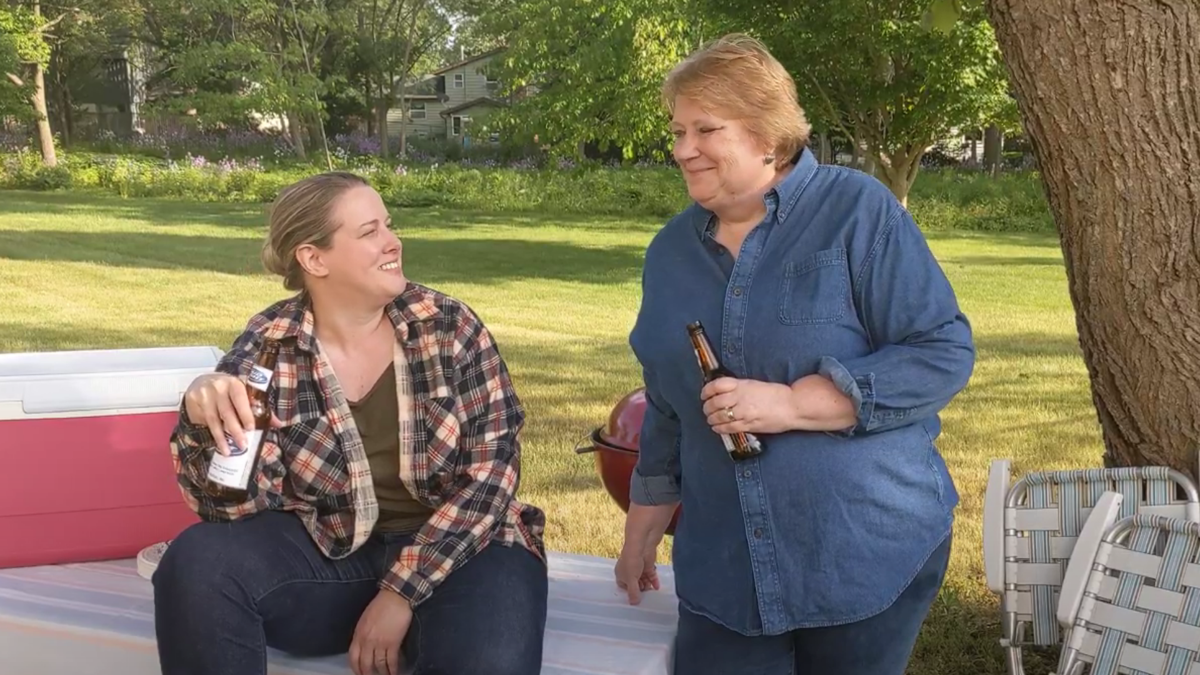 Kathy Berg and Kara Ernst-Schalk portray the characters Marge Murray and Reggie Flutty in the Racine Theatre Guild's production of "The Laramie Project," available for on-demand streaming from July 23 to August 6. 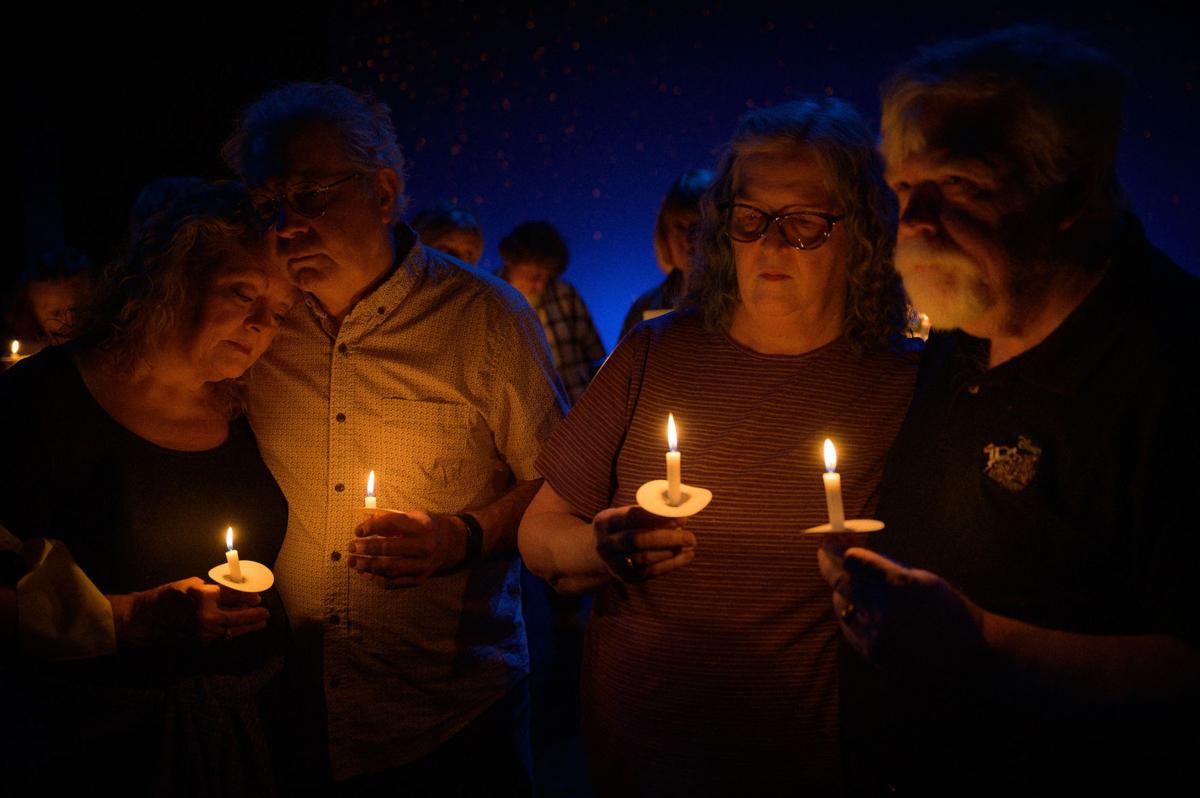 Shown in a candlelight vigil scene from the film, the Racine Theatre Guild put together an online, communitywide production of "The Laramie Project," which is to be available for on-demand streaming from July 23 to August 6.

RACINE — Live theater may be out of session, but online productions are keeping audiences entertained.

The Racine Theatre Guild will premiere an online, community-wide production of “The Laramie Project” July 23 to Aug. 6. Viewers will be able to watch the production by streaming it on demand.

The play focuses on the 1998 story of Matthew Shepard’s murder in Laramie, Wyoming, as the victim of a fatal, homophobic hate crime.

According to an overview of the play on RTG’s website, “Members of the Tectonic Theater Project traveled to Wyoming wanting to learn more about Matthew, Laramie and the reality of violence and prejudice, conducting over 200 interviews in the year that followed.”

Making a play for online

“The Laramie Project” is no different than any other live theater production. It is theatrical, focusing on costumes and props, concentrating on having the correct lighting, and of course, having actors portray characters.

“The Laramie Project” was written in a unique interview format, and eight actors play more than 60 characters.

Doug Instenes, managing and artistic director for the Racine Theatre Guild, got creative in planning the new production. Instead of casting only eight actors, Instenes decided to have nearly 100 Racine community members in the production.

“In this time of isolation and everyone being on their own, we wanted to bring the whole community together,” Instenes said. “In Laramie, they all had to come together during a tragedy, and for us dealing with COVID, we’re all trying to come together to create something positive during a very awful time.”

Instenes called up theater guild volunteers, well-known Racine residents and patrons to contribute to the project. And more importantly, the production was able to enlist actors who work in the same careers as the characters.

“We have an assistant district attorney, a judge and a policeman who actually do that in real life playing these roles,” he said. “It’s art and real life coming together.”

Instenes and Joycelyn Fish, director of marketing and development for RTG, worked together for two months to contact community members and to work out scheduling times for filming and post-production. Fish also worked as the filmmaker for the project, using just an iPhone as a camera.

“We were able to dress in ’90s attire, and Joycelyn shot my scenes all on her iPhone,” said Barb Farrar, executive director for the LGBT Center of SE Wisconsin, who plays a reporter. “It was kind of grassroots in that way.”

Because of COVID-19 safety standards, Instenes and Fish had to shoot most scenes with one actor at a time, calling some cast members into the theater, or showing up on site to offices, police stations, churches, restaurants and other locations.

According to cast members, the approach made the production feel intimate and more like a documentary than a play.

“It added a lot more of an intimate feeling to the performance, with it just being speaking to the camera, which I feel really tied in well with the tone of the show,” said Andrew Dorst, who plays the student who found Shepard.

Although Instenes and the rest of the Racine Theatre Guild were glad to have this experience, they anticipate the day they can perform live again.

Pre-pandemic, the guild produced about 160 performances a year, including children and adult programs, comedy shows, jazz festivals and others.

“It was very exciting to put this play together, but the thing I don’t like is it’s very isolated,” Instenes said. “There’s nothing that will take away from live theater. Live theater will always be a unique experience.”

He further explained that many of the cast members have not met one another, or know who else is in the play.

“Theater is about a community of people, the energy and working together as a team.”

For Dorst, this experience was not so bad.

“I was really excited for the opportunity to work on this, because it had been so long since I’ve been a part of any sort of production,” Dorst said. “I’ve felt really disconnected over the past year of not having that sense of community.”

For now, the Racine Theatre Guild will have to wait for a board decision at the end of August on when live performances can return to the theater.

For Barb Farrar, she recalls the impact Matthew Shepard’s story had at the time.

“I learned about it on the news, and I remember it really shocked the LGBTQ+ community,” said Farrah. “It made them think twice of walking out in public.”

For those unfamiliar with Shepard’s story, Farrar says you get to understand the complexities of everyone’s story in the online production.

“It’s really impactful to see how compassionate some people were and how hateful others were,” she said.

At the end of the online production, Farrar and Instenes will have a talkback session, discussing the important themes and issues brought up in the play.

Farrar mentioned that the talkback will include Jenn Palmer, a former board member for the LGBT Center for SE Wisconsin, who was an acquaintance with Matthew Shepard in school and in a Gay-Straight Alliance.

“Theater is a great way for shedding light on reality a lot of times through fictitious stories that we can relate back to our lives,” Dorst said. “Telling a story like this, a real life event that happened, reminded us of some of the harsh realities that exist in this world. By confronting it, we can do better moving forward.”

Tickets cost $18 for individuals and $25 for household viewing, and can be purchased online at racinetheatre.org. For more information, call 262-633-4218.

IN PHOTOS: A look at the first day of demolishing the Capitol-Park Theater

Protesters there all day

Tickets cost $18 for individuals or $25 for household viewing, and can be purchased online at racinetheatre.org. For more information, call 262-633-4218.

Kathy Berg and Kara Ernst-Schalk portray the characters Marge Murray and Reggie Flutty in the Racine Theatre Guild's production of "The Laramie Project," available for on-demand streaming from July 23 to August 6.

Shown in a candlelight vigil scene from the film, the Racine Theatre Guild put together an online, communitywide production of "The Laramie Project," which is to be available for on-demand streaming from July 23 to August 6.