Racine Unified School District administration is weighing a tough decision, and no matter the outcome, people will be angry.

The district is in the process of deciding whether to bring students back into school buildings in the near future, after 10 months away from them due to the COVID-19 pandemic. Students have been learning virtually so far this year, through a mix of synchronous and asynchronous learning.

"It's about time," Dean Rouschia, owner of Yuni's Avenue Cafe, said of allowing dining rooms to open up with more capacity. But the capacity of Linda's Hallmark Shop prior to Monday's loosening was 10 people. That limit, at least for now, isn't going to change. "We like it at 10 ... We want to keep everyone safe," said Linda Lewis, manager.

The contentiousness of this issue was clear from the more than 40 public comments submitted to be read during the public comment portion of Monday’s School Board meeting. The board usually receives only a handful of public comments during each meeting. In-person comments are prohibited for the moment due to the pandemic.

Some teachers and parents argued that it would be foolish to bring staff and students back into buildings when vaccinations are just around the corner. Teachers asserted that the district should wait until staff have all been vaccinated before bringing students back.

Another group of parents argued Racine Unified should be able organize a safe return to buildings, since other schools in the county and region, such as Kenosha Unified, have convened in-person classes this year.

However, several Unified teachers commented on claims made by the Kenosha Unified teachers’ union that two KUSD teachers have caught COVID-19 at school and brought it home to their spouses, who ultimately died from complications of the disease.

Jody Zirkelbach of Racine was one of the commenters who backed a return to school buildings, but only following vaccinations.

“Let’s try to keep our community members alive,” she said.

Mary Kate Harris of Racine said the social isolation and depression students are suffering while they learn virtually mean that the benefits of returning to schools far outweigh the risks of COVID.

“The children of our community are being punished by RUSD and it is unacceptable,” she said. “They deserve better.”

Jennifer Skuhra of Mount Pleasant, a parent of two elementary-school children, asked the district to continue to rely on its current gating criteria.

While there’s a lot of talk of students falling behind, she said, they’re only falling behind if their learning is being measured on a scale that means nothing in the real world, especially during a pandemic.

She argued that during virtual learning students have “gained independence, compassion, patience and respect in a way that they could have never done before.”

While many teachers questioned the district’s plan to update its gating criteria, Emily DeBaker, the district’s communications manager and a member of its reopening team, said that updates to the gating criteria will be based on new information on the virus that has come out in the past month. The original gating information was released in October; guidance on how the virus spreads, and safety measures, have continued to evolve since then.

DeBaker and Janell Decker, executive director of curriculum and instruction and another member of the reopening team, said that if students return to classrooms this year, the district will continue to offer a virtual option for families who aren’t comfortable with face-to-face instruction.

Teachers and special education students who cannot learn from home are set to return to school buildings Jan. 25, and district leaders say they plan to give another update on a possible return to in-person learning by that date.

Superintendent Eric Gallien said that any notice of a return to learning face to face would come two to three weeks prior to when students would be expected to return.

Kirsten Engen of Kenosha and Allie Jung of Milwaukee laugh as they trek through River Bend Nature Center on snowshoes on Saturday, warm drinks in hand.

CALEDONIA — Steve and Suzie Rottmann, and their three children, had never gone snowshoeing before.

The Oak Creek family saw a Facebook post about friends snowshoeing at River Bend Nature Center. They wanted to spend time outside, so they ventured out to 3600 N. Green Bay Road on Saturday to try it themselves.

Suzie Rottmann added that it was their wedding anniversary in a week, so this was an early celebration.

The Rottmanns aren’t alone in coming out to River Bend this winter, as it has been a busy season for the center so far.

Jeanne Dernehl, executive director for the center, said it’s impossible to say if there’s been a definite increase in cross-country skiers or snowshoers because for those owning their own skis and snowshoes, there’s no check-in or fee to use the trails.

However, Dernehl does see some patrons who stop by the Main Lodge to rent equipment. The first weekend of 2021 right after the first large snowfall of the season was “crazy busy,” Dernehl said.

The pandemic has changed everything for the center, she said. Last March, when everything shut down, that would’ve been the beginning of one of the center’s busiest times of year, with about 20,000 visitors total per year.

Typically, the center would host regular pancake breakfasts in the spring bringing between 1,800 to 2,000 people celebrating the maple sugar harvest and about 5,000 school children would stop by for field trips. None of that happened in 2020.

“Everything kind of came to a halt,” Dernehl said. “On the other hand, the amount of people who are out here hiking, canoeing and skiing has been phenomenal.”

Obviously, hikers and canoers are more prevalent during the warmer months. But the desire to get outside has remained.

The trails have been more heavily used by families instead of classes of students, Dernehl said. And understandably so.

The center had a very busy summer renting out canoes and kayaks. But as soon as there was snow, people were eager to start skiing and snowshoeing.

“They’re still looking for ways to be outside,” Dernehl said. “There’s just not a lot for people to do.”

While the pandemic is probably a factor for a potential increase in traffic, it’s hard to tell if that’s the only reason, because the last few years there hasn’t been a lot of snow, she said.

“If we had this nice snow last year, we might’ve seen these large amounts of people then,” Dernehl said.

Mary Fluegge of Racine came to the center to snowshoe on Saturday for the fifth or sixth time since the snow fell, she said. She’s owned her own snowshoes for six years. However, snowshoeing this much isn’t common for her. 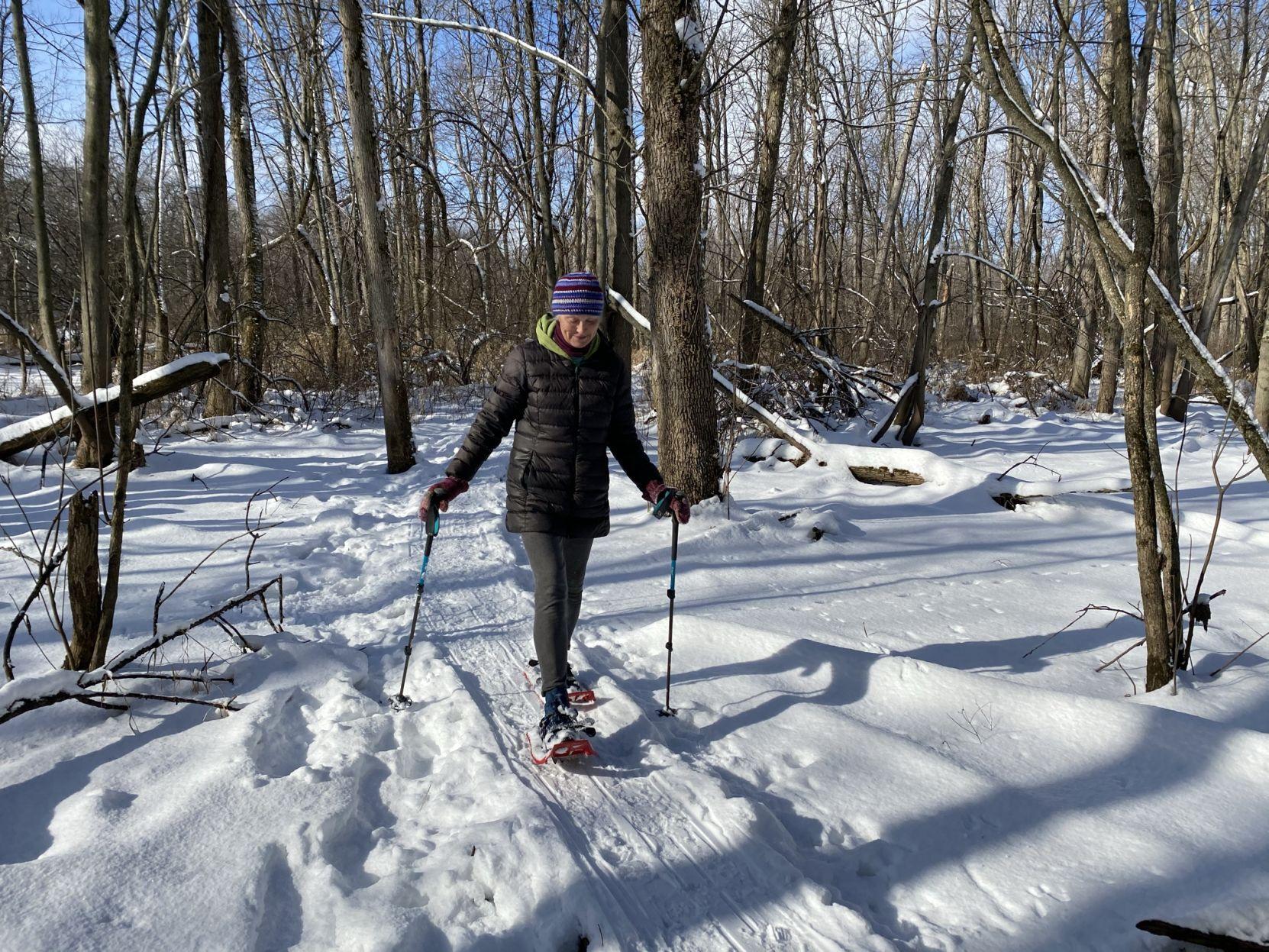 Mary Fluegge of Racine snowshoes Jan. 9, 2021, at River Bend Nature Center for, she said, the fifth or sixth time since the snow fell.

In contrast to other years, without a lot on her social calendar this year and while cutting back on working, she’s gotten out more often.

“I wanted to get outside in the sun. The sun helps you feel better and gives you Vitamin D,” she said. “I’ve noticed more people out, especially in parks.”

There’s always been visitors who’ve come to the center on a regular basis, but people who haven’t come regularly are discovering the center for the first time because they need things to do, Dernehl said.

“We’ve gotten a lot of new people who in the past probably were doing other things,” she said. “People are really hungry and their options have been reduced. Kids are sitting in front of screens all day. Parents are dealing with virtual learning and all the other restrictions. They can’t go to movies and malls.”

Friends Marcella Mazurek of Racine, Kirsten Engen of Kenosha and Allie Jung and Maria Lillge of Milwaukee agreed that reduced options are an issue.

“All of the tubing and ice skating rinks were closed,” Mazurek said. The group had gone snowshoeing once when they were a lot younger, so they were excited to revisit an outdoor activity they hadn’t done in a while and get some exercise.

“We’re pumped,” Engen said as she strapped on her snowshoes. 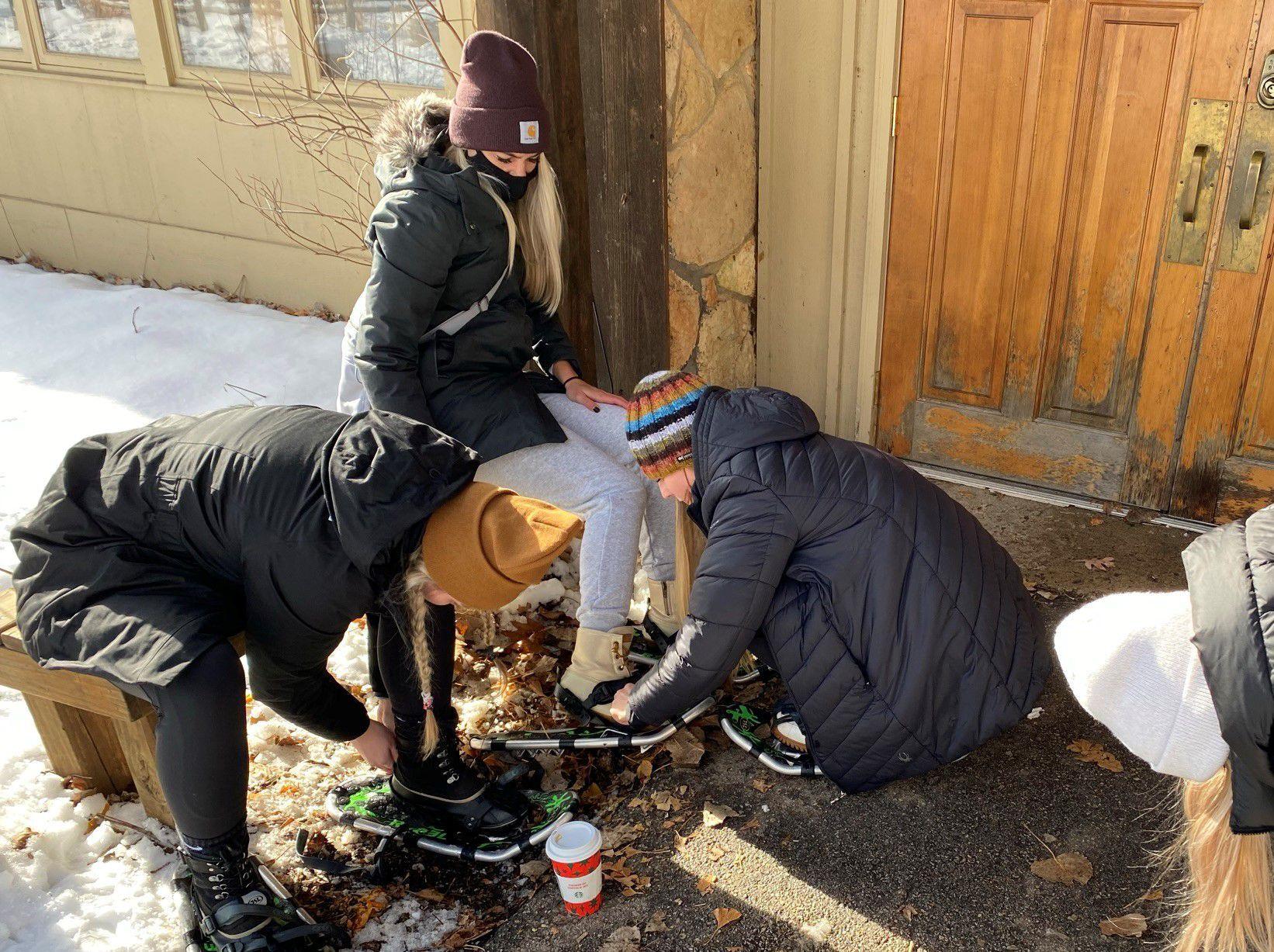 Marcella Mazurek of Racine, crouching, assists Allie Jung of Milwaukee with her snowshoes. The group of friends were "struggling" to put on their equipment, they said.

Cross-country ski and snowshoe rentals are available at River Bend weather permitting and given there is at least 4 inches of snow on the ground. Cross-country ski equipment includes skis, poles, and boots. Both rentals are $12 per person and are on a first-come, first-served basis. 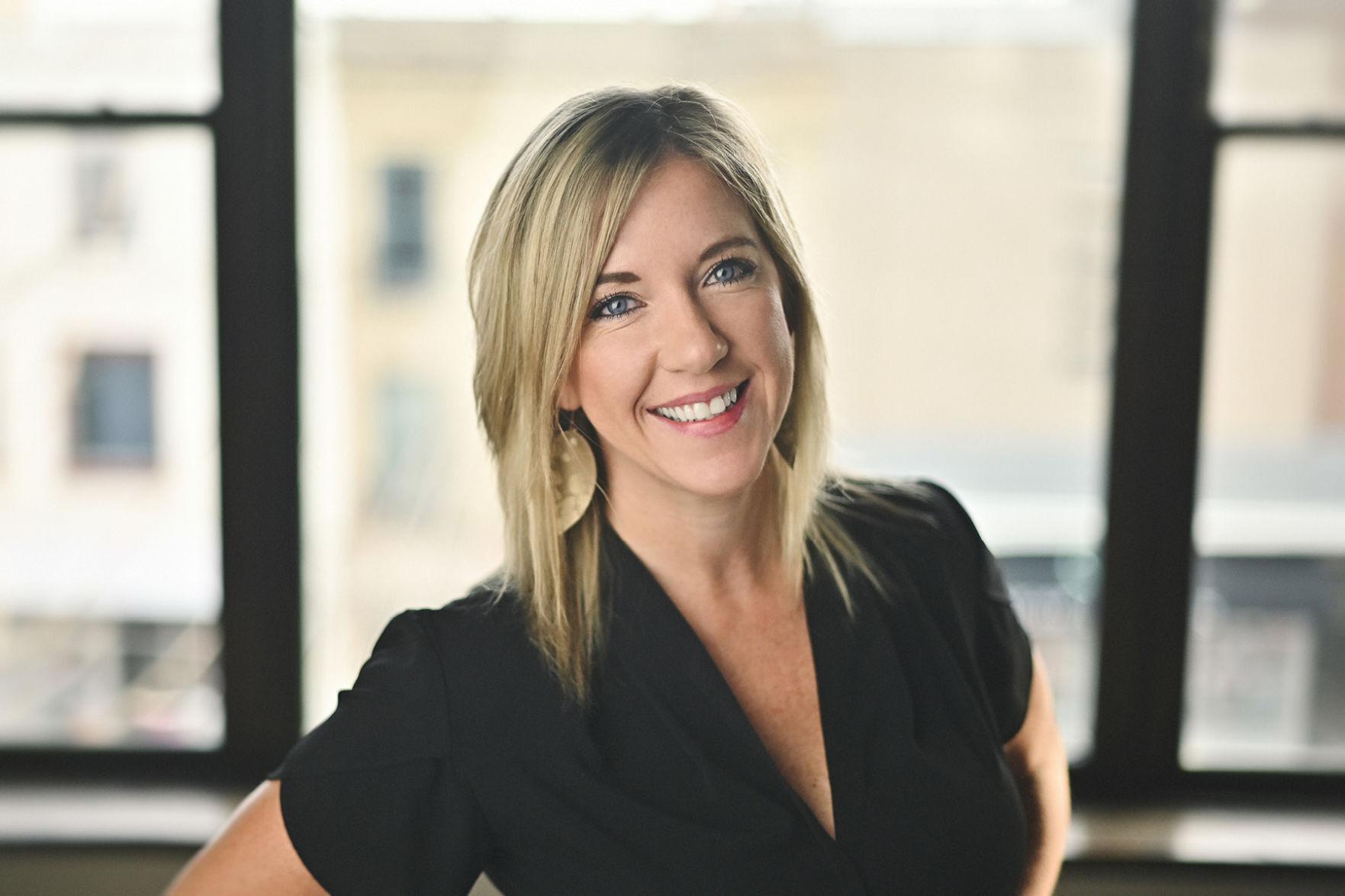 Kelly Kruse is the newest member of the Racine County Board.

Kruse is the executive director of Downtown Racine Corp., the nonprofit focused on boosting traffic and business in Racine’s Downtown.

“I am humbled and honored to serve on the County Board,” Kruse said in a statement. “They have done an outstanding job in the past with managing the budget while providing excellent services to our residents. I look forward to navigating new challenges while continuing the great progress they have laid the groundwork for.

“I have worked with countless business owners, nonprofits and residents over the last 15 years to make Racine County a desirable place to live, work and enjoy. I will continue that passion of public service with my time on the County Board.”

Kruse has been appointed to the District 10 supervisor position left vacant by the departure of Emily Lawrence, who resigned less than eight months after being elected, upon taking a job in Alabama. Her resignation was announced at the Nov. 2 meeting of the County Board.

Lawrence had also been a Wind Point trustee, a role that has since been filled by Jay Hammes, a former Wind Point trustee and currently the president and founder of Safe Sport Zone, a national event security program.

Kruse’s new constituents live in four municipalities, including all of Wind Point and parts of North Bay, Caledonia and the City of Racine.

Congrats and welcome to the newest Racine County Board Supervisor, Kelly Kruse! Kelly has been appointed to fill the...