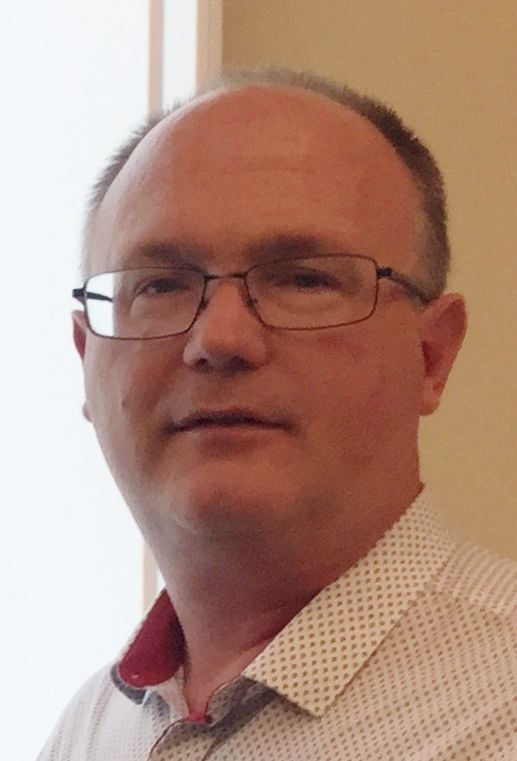 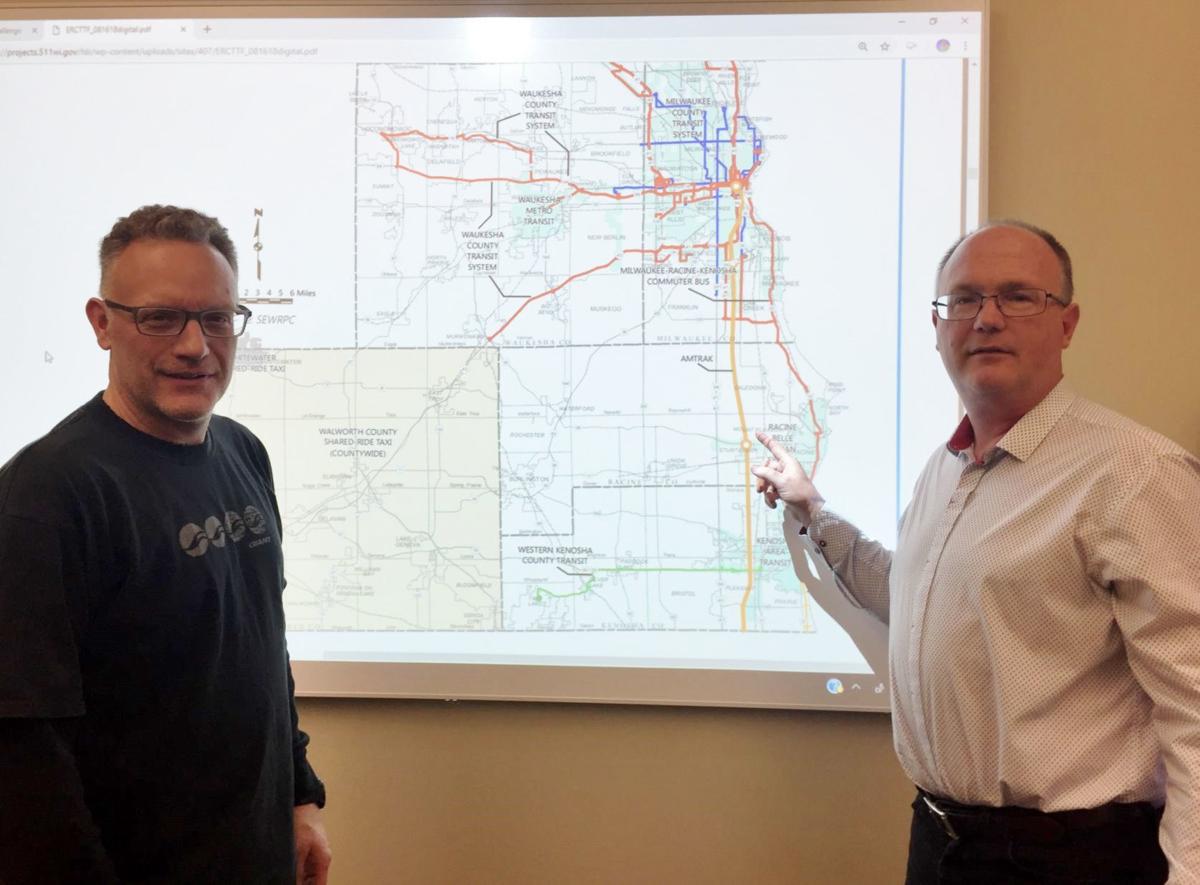 Don Heckel, left, owner of 3rd Coast Bicycles in Downtown Racine, and Steve Whitmoyer, a Gateway Technical College instructor, are hoping their entry into Foxconn's Smart Cities-Smart Futures competition is one of the final-round winners. Their idea has survived the first two cuts.

RACINE COUNTY — A pair of local men have cleared the first two hurdles in Foxconn’s Smart Cities—Smart Futures competition to reach the final round with their conceptual transportation smartphone app.

Don Heckel, owner of 3rd Coast Bicycles, 401 Sixth St., and Steve Whitmoyer, who teaches civil engineering, the construction sciences and freshwater sciences at Gateway Technical College, at this point are 10-percenters in the Smart Cities contest. Of 325 ideas submitted, 88 survived the first cut. Then 30 second-round winners, with eight honorable mentions, were announced on March 13.

Another Gateway instructor, Kate Field, also had her horticultural proposal selected as a second-round winner.

As many as 16 Round Three winners will receive $5,000 awards, and Foxconn has pledged up to $1 million in cash and in-kind technical support in awards over the next three years. The winners will be announced by the end of this month.

Heckel, who was taking a class from Whitmoyer, explained the genesis of their Smart Cities—Smart Futures entry. “Steve, as the instructor, encouraged all of the students that Foxconn was having this competition, and (said) ‘If you guys have an idea, get in (the contest).’”

Heckel’s transportation idea is called Tier-Modal. Right up against the first-round deadline, he submitted the idea and later brought Whitmoyer in for “reinforcements.”

What is a 'Smart City' And how does the designation affect residents?

Heckel said about the impetus for his proposal, “Initially, I kind of struggled with the Foxconn thing. My focus was: How do you get all these workers, in theory 13,000 people, without making traffic worse, to Foxconn’s campus?

Whitmoyer explained Tier-Modal this way: “There’s a lot of different modal opportunities out there that already exist,” he said: bus systems, bicycles, Lyft and Uber. “But what we were looking at: They don’t function well together and between themselves.”

So in Heckel’s and Whitmoyer’s business plan, people would have on their smartphones an app that would be a pass to various modes of transportation. The basic-tier app would give unlimited ridership on Racine and Kenosha buses.

They also want to extend either the Chicago Divy bikes north to this area or Milwaukee’s Bubler bikes south, and the app would allow use of the bikes throughout their range. Those bike companies put bike units at the various transportation centers.

The Tier-Modal proposal also includes having weekend passes for the Metra train. “That’s why we want Divy,” Whitmoyer explained, so a Tier-Modal user could take the train to Chicago and then use the bikes to move around.

And they’re hoping they could include 20 miles per month of Lyft- or Uber-type access; they’re working with a local startup company on that aspect.

For round two, to show their concepts they created a website, www.sites.google.com/gtc.edu/tmodal.

They had until midnight April 5 to submit their third-round entry which Whitmoyer called a “pseudo-business plan. They approved the conceptual idea,” he said. “This (round) is the marketability: Is it feasible? is what they’re asking.”

Heckel and Whitmoyer are trying to get their price for Tier-Modal down to $99 per month for basic-tier service.

They have not started building the app itself; their plan is still conceptual. But their hope is that, if Foxconn likes Tier-Modal, it would help them develop it further, including helping them create the app.

“We’re not app developers,” but Foxconn is really good at it, Whitmoyer said.

Heckel said if they do make the Smart Cities-Smart Futures final cut, “There’s a lot more to be done” including negotiating with the transportation companies.

In the future, for a surcharge, they propose having available a small number of shared electric cars at key locations. The app would act as a pass key to use them. That would be in the upper tiers of their transportation network.

“The idea is to have tiers of services,” Whitmoyer said. “So we’re doing the basic tier, which is mass transit. Upper tiers would involve “point-to-point transit.”

“We’re not creating the wheel here,” he said. “There’s all these different pieces and parts, and we’re trying to figure out how to make them work well together. … The idea is to have one app that gives ‘em one pass that allows them access anywhere across the system.”

"My focus was: How do you get all these workers, in theory 13,000 people, without making traffic worse, to Foxconn's campus?"

Since I started writing this column almost eighteen years ago, a lot has changed in the world but believe it or not, my original article on U.…

Sue Gracyalny, who owns the Depot Tavern and Restaurant on Highway G alongside her husband, Mark, helped get the Canadian Pacific Holiday Train to make a stop near her side of the tracks in Caledonia to get the community to raise money and food.

Don Heckel, left, owner of 3rd Coast Bicycles in Downtown Racine, and Steve Whitmoyer, a Gateway Technical College instructor, are hoping their entry into Foxconn's Smart Cities-Smart Futures competition is one of the final-round winners. Their idea has survived the first two cuts. 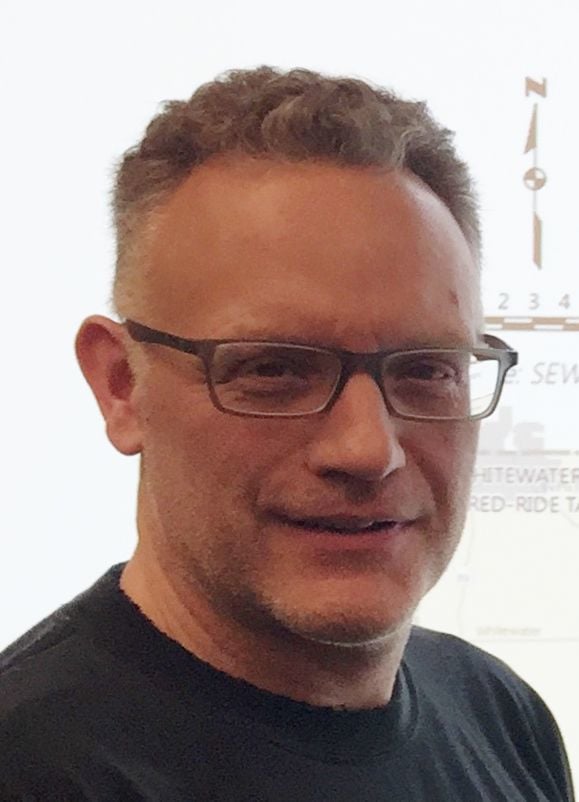