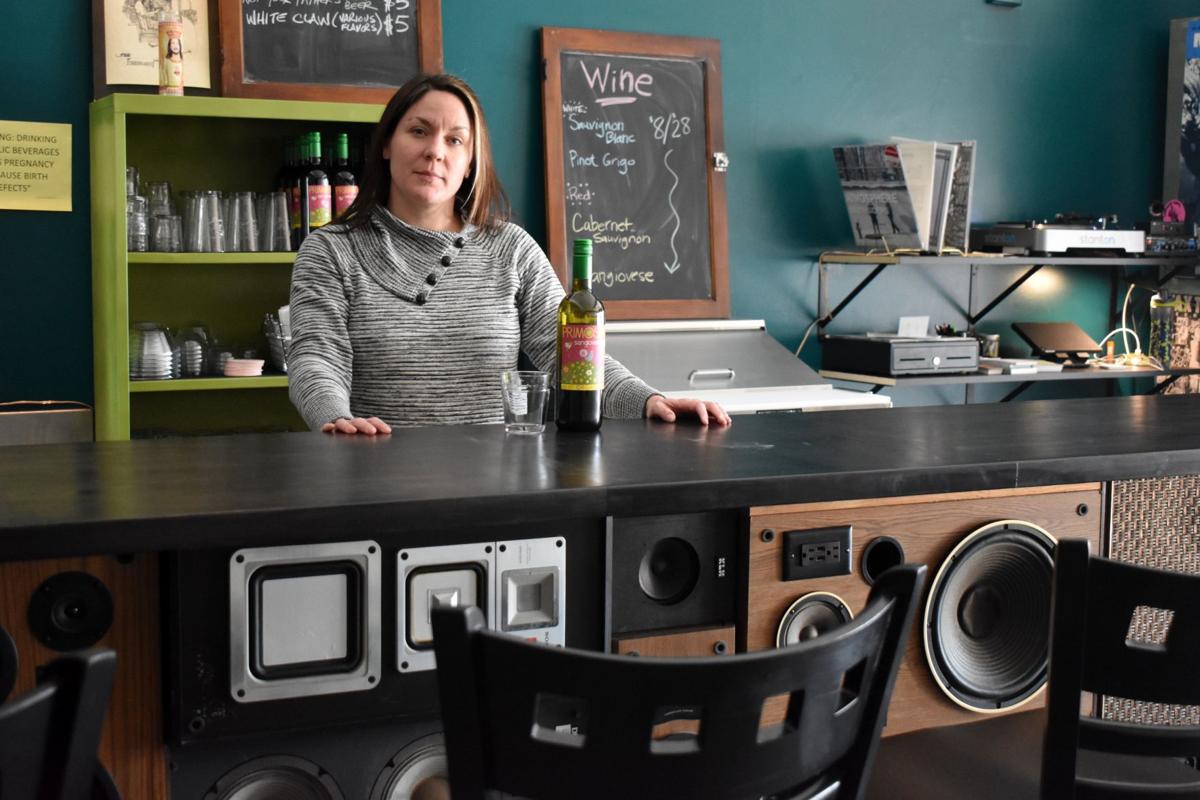 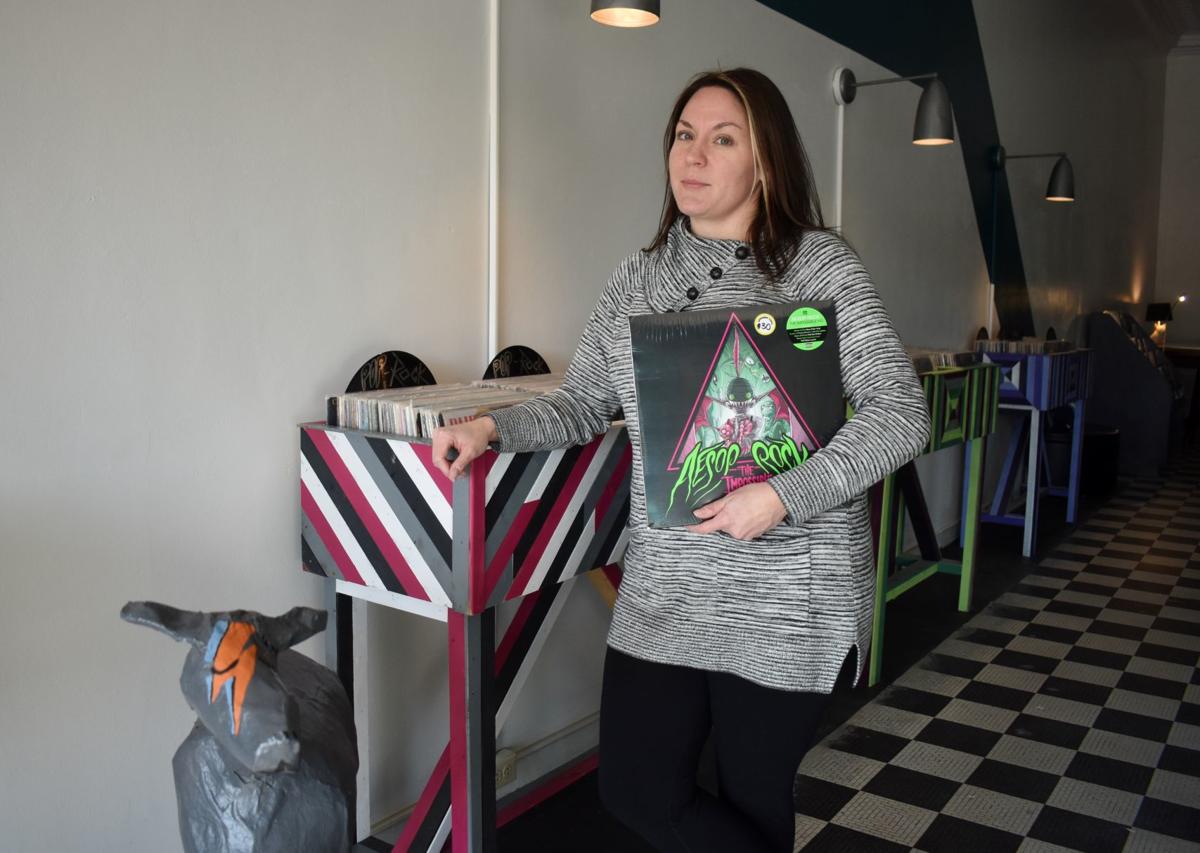 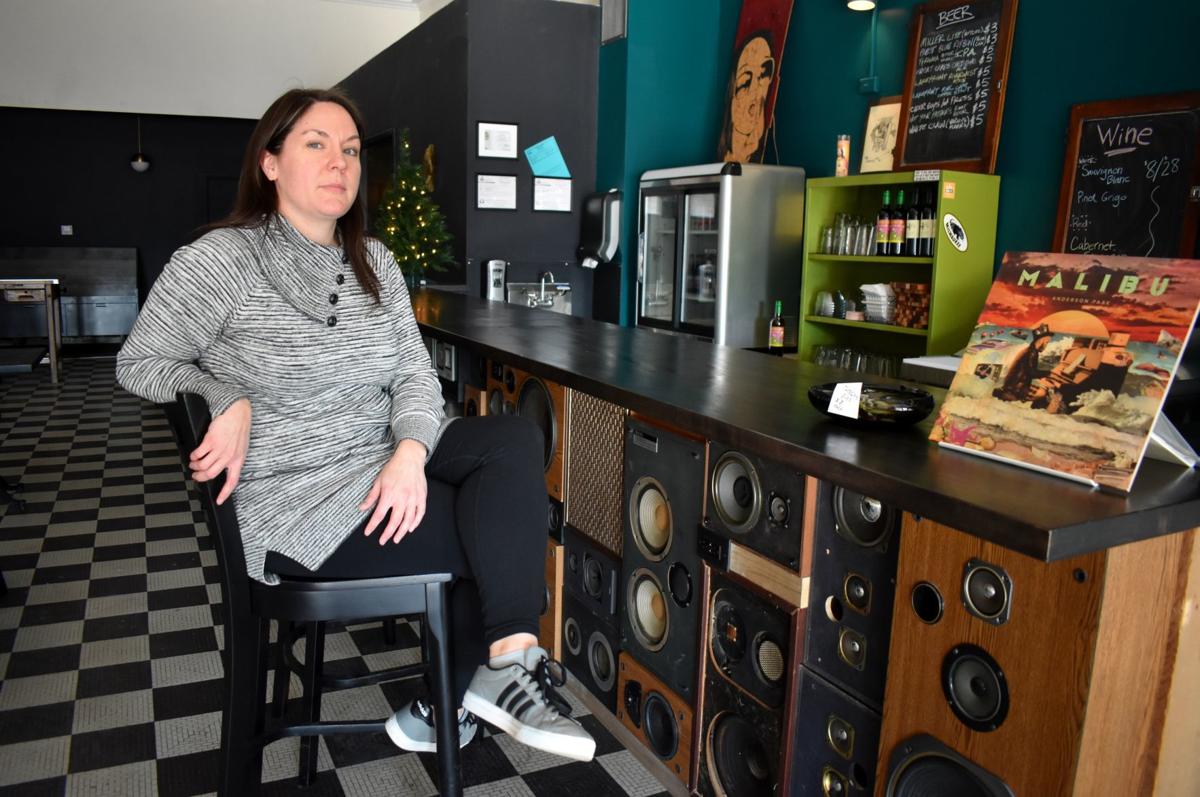 RACINE — To Jada Pfarr, those ones and zeros of digitized music cannot compete with good old long-play vinyl records.

Now, the Kenosha woman has turned that love of records into a new Downtown Racine store, Longshot Vinyl Lounge, at 324 Sixth St.

“And we — especially me — just don’t like record shops,” she said. “They’re dusty; there’s a million records. You have to spend hours of time.”

With one particular Milwaukee record store in mind, Pfarr continued: “There’s nowhere to sit down, there’s no bathroom — not a public bathroom, anyway. They have live acts, but it’s cramped, it’s small. They have DVDs; they have all this other stuff in there.”

Longshot Vinyl Lounge does indeed sell beers and wines. The store’s most talk-inducing feature is easily the speaker bar. The 16-foot-long facade is lined entirely with the fronts of old stereo speaker cabinets with the front plates removed to expose the tweeters, woofers and other sound-producers.

Pfarr, 39, explained that the name Longshot came from the fact that she’s a cancer survivor who was diagnosed with leukemia when she was 28 and pregnant with her son. She successfully endured 2½ years of treatment.

“And, since then, I’ve just been, kind of going after what I want,” she said, “… and it’s a long shot to get people to come out to buy records; it’s tricky.

“We were sort of just playing around with the name when we started the pop-up record shop in 2016, and it just stuck.”

Pfarr was referring to the events she and Jeff would do — about 20 of them over time, she estimated — at places such as McAuliffe’s on the Square, 213 Sixth St. For a couple of hours each time, they’d set up with a disk jockey, turntable, sound system and crates of records to sell, and play records.

A love of records

Pfarr said her love of records started as a child when her parents were playing them. “My parents had a turntable, they had a million records, and I loved taking them out, looking at the artwork, putting the needle on the record, listening to the pops and the cracks, the process of listening to music.

“And what I don’t like about things that aren’t records, for example using your phone: All of that’s gone.”

She also believes, as many people do, that records sound better than their digital counterparts: “When (music) is digitized, it takes away a lot from the sound of it, so you don’t get all of the sounds that the musician intended you to hear.”

Longshot Vinyl’s 1,250-square-foot space is wide open and uncluttered. It also has, by some comparisons, a relatively modest number of records at any one time. The store currently has about 800 to 1,000, and Pfarr said it will cap out at about 1,000. Only a small handful at the moment are 45-rpm records; the rest are LPs (33 rpm). They’re not big sellers, Pfarr said.

What’s not in stock they can either order new from a dealer or look for a used copy.

Jeff is Jada’s buyer, she said. For his job, he travels all over the Midwest. “Wherever he goes, he goes to a record shop.” He also goes to record shows about six times a year.

Their biggest musical genre is pop/rock, and their records mostly date back to the 1960s, but no earlier, Jada said. “Basically everything but classical music, because it doesn’t sell very well,” she said.

Longshot also sells turntables including Bluetooth types that can convert analog sound to digital and be played via Bluetooth-enabled speakers, a computer or smartphone.

RACINE — Roberta, the newest restaurant created by Roberta Schulz, owner-operator of the former Out of the Pan, is now open at 322 Sixth St.

Roberta is cash-only until Schulz’s credit card system can be installed; she is hoping to have that in place by later this week.

UPDATE: A multi-generational tradition of fall apple picking in Rochester

ROCHESTER — One of Racine County’s best-kept secrets is Ela Orchard, LLC, located a quarter-mile west of Downtown Rochester at 31308 Washingto…

UPDATE: A multi-generational tradition of fall apple picking in Rochester

ROCHESTER — One of Racine County’s best-kept secrets is Ela Orchard, LLC, located a quarter-mile west of Downtown Rochester at 31308 Washingto…