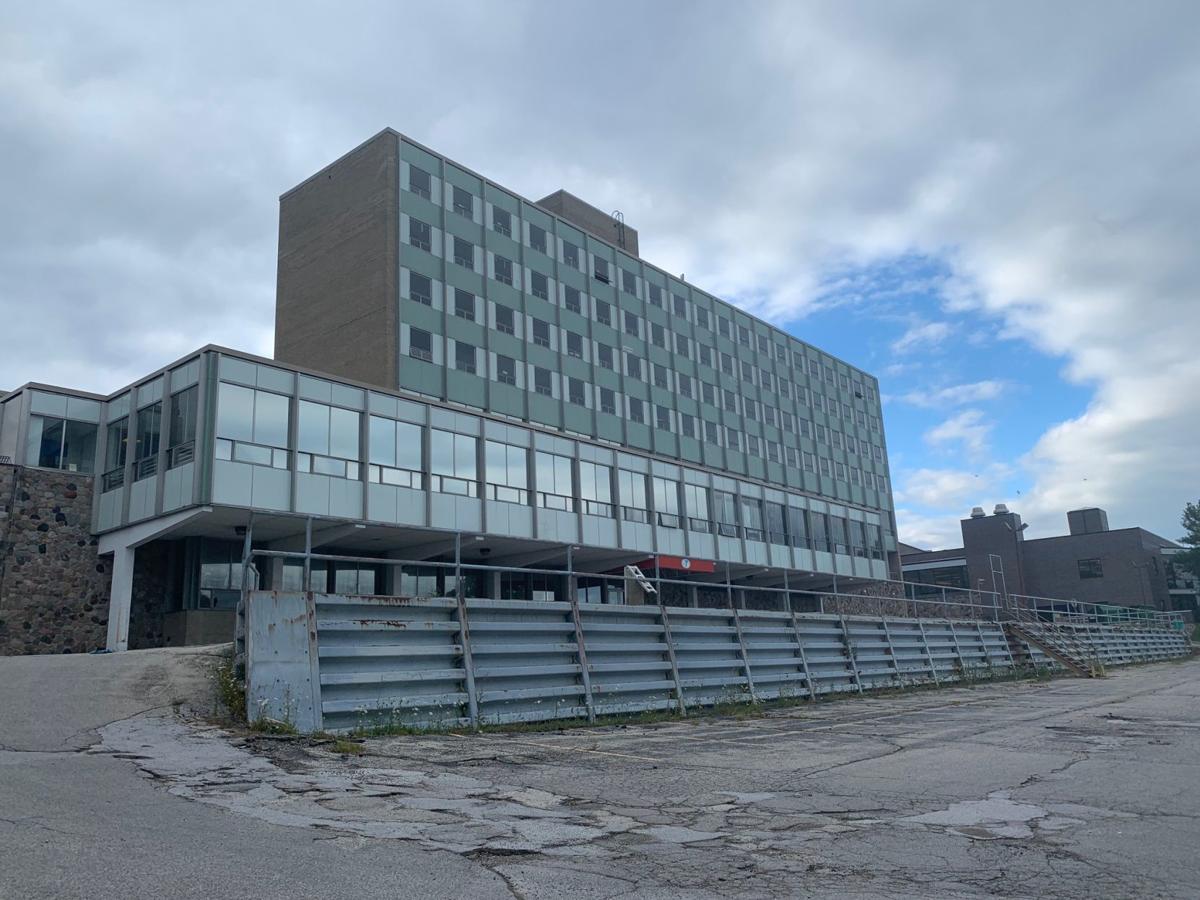 The now shuttered lakefront YMCA at 725 Lake Ave., is shown on Friday. West Allis-based Cardinal Capital Management and Kenosha-based LandQuest had planned to demolish the entire structure and rebuild a modern Y as part of a larger, multiuse development. Those plans have fallen though. 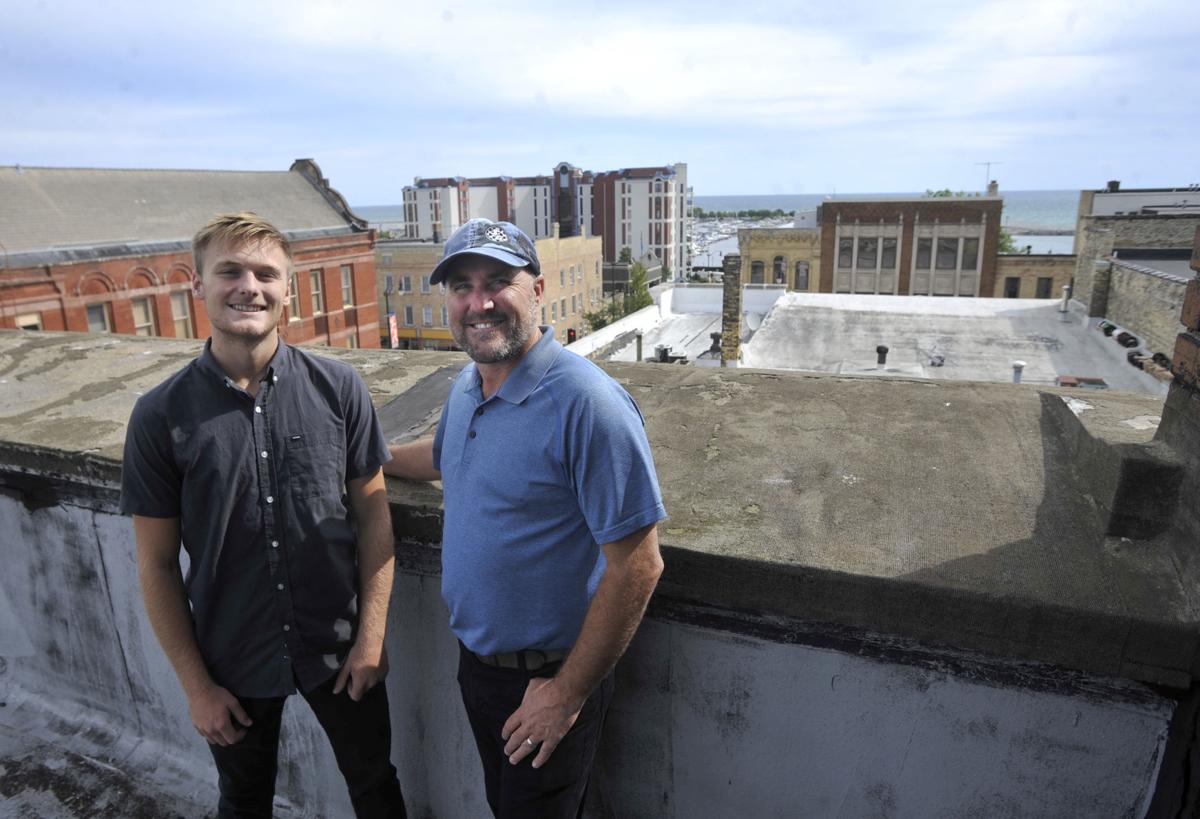 Sam Ryan, left, and his father, Tim Ryan, on the roof of 401 Wisconsin Ave. The Mt. Royal Investments partnership proposed to redevelop the building into 46 apartments. However, Tim Ryan now says he may sell the building and walk away. 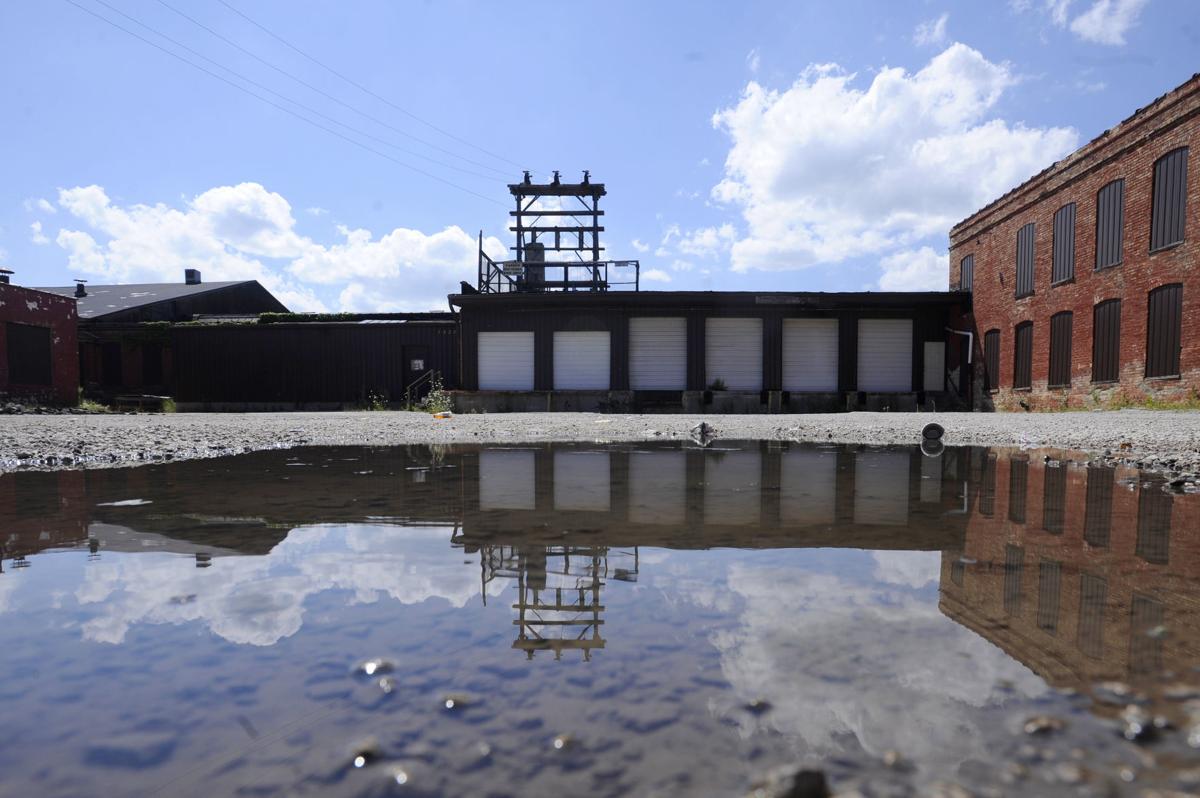 The Ajax complex of buildings, a former longtime industrial site in the 1500 block of Clark Street, is shown in July 2016.

Cardinal Capital President Erich Schwenker said last week that his company decided not to do the YMCA tower project at 725 Lake Ave. He did not go into detail about that decision but said: “The mayor had a vision; we will not be involved in that.”

In speaking about the Wisconsin Avenue project, Mt. Royal representative Tim Ryan said that plan “officially stalled” after his group had invested tens of thousands of dollars into testing, architectural and engineering work. The problem had to do with trying to work out an incentive with the city, he said.

In response, Mayor Cory Mason said Thursday that developers who announce big projects without meeting with the city first — and who seek city financial incentives — are starting out on thin ice because money for granting incentives is extremely limited.

Meanwhile, a proposal for a 130-unit apartment project at the former Ajax industrial site in Uptown is inching along — but still moving, the developer and city officials say.

In mid-February, the Racine Family YMCA Board of Directors voted to sell the Downtown YMCA property to two developers working together. West Allis-based Cardinal Capital Management and Kenosha-based LandQuest had planned to demolish the entire structure and rebuild a modern Y as part of a larger, multiuse development.

Those are the same two developers working to build two adjacent housing projects on the Ajax site.

A new lakefront Y project would likely also have included housing, and Cardinal would have leased the newly built Y building back to the organization. No cost estimate was ever mentioned for a project at 725 Lake Ave.

Schwenker said that other developers would be more appropriate for a project there.

Asked about the end of that potential endeavor, YMCA Executive Director Jeff Collen said last week that in late May 2018, Cardinal spoke with the Y Board about its potential interest in the lakefront YMCA site. (The site currently includes the outdated and now abandoned Y building which opened in 1960, and the attached and also vacant YMCA tower structure.) The Y Board gave Cardinal a one-year purchase option to begin investigating the possibility of a project there.

But Cardinal backed off within about four to eight weeks of the February Y Board vote and announcement, Collen estimated. He said his impression was that Cardinal’s and LandQuest’s efforts to move the Ajax project to the construction stage replaced their intention to do the Y project. So, the one-year purchase option was allowed to lapse.

Meanwhile, partly — but only partly — because the Y Board thought they had a developer, they moved out of the old lakefront facility and began renting a much smaller space at 141 Main St. for members to use in its place.

Collen said they have no plans to reoccupy the outdated Y.

Since Cardinal’s purchase option expired, Mason said, “we continue to talk to the Y and their board about that being a really great potential redevelopment site and would like to see something exciting happen there. It’s got an amazing lakefront view. We remain jointly concerned about redeveloping a great site and keeping a Y presence in or near the Downtown.”

The mayor added: “But, like all these things, they’re complicated. It’s on a bluff, it probably has parking that needs to be rebuilt.

“People look at it and think, ‘Oh, this should be easy.’ And what we determine with a lot of these projects is: None of them are easy.”

Mason said city officials will continue to work with the Y and whatever developer its officials choose.

In September 2018, a California development team called Mt. Royal Investments, which had previously bought another former Downtown YMCA — the one at 401 Wisconsin Ave., built in 1915 — announced it planned to convert it into 46 brand-new apartments in a $4.5 million redevelopment.

But about 10 days ago, Mt. Royal representative Tim Ryan pronounced that plan “officially stalled." The problem had to do with trying to work out an incentive with the city, he said.

“In general, the city said they would do everything they can to get this off the ground,” Ryan said. But he acknowledged city officials can say there never was a promise.

If nothing changes, Ryan said, Mt. Royal will sell the building, and he said two entities are actively looking at it, and he is “strongly considering” selling it. One potential buyer is a nonprofit; a sale to that entity would take the property off the tax rolls, he pointed out.

“The city and Downtown would be far better off if we could do what we wanted to do,” Ryan said.

Asked about the situation Thursday, Mason said: “All these development agreements are complicated and have complex financial instruments. We meet with developers who either will announce through the press or come meet with us, who say: If we just gave them millions of dollars of taxpayer money, they could build all kinds of exciting things.

“There’s a role for incentives to play in projects, but we also have to safeguard the taxpayers in this process as well. So, a lot of it comes down to math: the valuation of the project and how their project compares to other competing projects that developers are proposing.”

He declined to talk publicly about the specific requests for the Mt. Royal proposal for 401 Wisconsin Ave. or any other project: “But, I will say that he is one of several developers who, after making an announcement, then came to City Hall and asked for incentives.

“The city is not wealthy, and so we have to pick our developments carefully, and we have to make sure that they can survive the scrutiny of the math of their project, and they have to compete against other projects that are asking for incentives in the marketplace like anybody else would.”

Cardinal Capital and its partner developer, LandQuest, announced their intentions to build a multistory apartment complex on the former Ajax site, along much of the 1500 block of Clark Street, in March 2018.

The current plan, Schwenker said recently, is for two apartment buildings there. One, a 50-unit apartment building, would be constructed using housing tax-credit financing that has been granted by Wisconsin Housing and Economic Development Authority. The rents in those units would be capped at certain percentages of the county’s median income.

The other building would contain about 80 market-rate apartments, Schwenker said. He called all 130 units “workforce housing” that will serve that part of Racine, including the employees of Twin Disc and SC Johnson, both of which have their world headquarters in that area. Schwenker said the Ajax housing will serve people whose incomes range from about $25,000 to about $75,000.

“That does not mean seniors or empty-nesters can’t live there,” he added.

In early June, during a Redevelopment Authority meeting, Mason was the lone “no” vote on a motion to extend Cardinal’s purchase option on the Ajax site by three more months, to Oct. 3. At the time, Mason only said he “had concerns.”

On Thursday Mason was asked whether, considering that vote, he supports the Ajax project.

“A big concern I had about that was: The proposal we were looking at would have been about taking a loan against intergovernmental funds to give a cash incentive to a developer, which we’d never done before, and I had real concerns about going in debt to do that,” Mason said. “What they were asking for was beyond the cash we have on hand in our intergovernmental fund to cover.”

The city did budget (and approve) $500,000 in intergovernmental funds this year and next year, Mason said to give incentive the Ajax project.

“Then we were left with a roughly $900,000 hole,” he continued. “So, what we’ve been trying to figure out is: How do we fill that hole without taking loans out against the intergovernmental fund to give out as cash incentives for money that we don’t current have?”

Mason said city officials continue to meet weekly with Ajax representatives to try to reach agreement. City Communications Director Shannon Powell stated: “The City continues to have very productive, weekly, conversations with the developer. We have a solid partnership with Cardinal Capital and have been working diligently to come to an agreement.”

Schwenker sounded optimistic about the project last week, saying “I believe it will get done. These kinds of deals are very complex. We really appreciate the community’s support and the support from City Hall.”

Cardinal intends to build, complete and open the Ajax buildings in 2020, Schwenker said.

Note: The address for the YMCA's rented space in Downtown Racine was incorrect in the original version and has been corrected.

“There’s a role for incentives to play in projects, but we also have to safeguard the taxpayers in this process as well."

Ajax closing date pushed back; remediation to start next month

RACINE — The closing date for the Ajax redevelopment site in Uptown Racine has been pushed back to the end of November, though work to remedia…

The now shuttered lakefront YMCA at 725 Lake Ave., is shown on Friday. West Allis-based Cardinal Capital Management and Kenosha-based LandQuest had planned to demolish the entire structure and rebuild a modern Y as part of a larger, multiuse development. Those plans have fallen though.

Sam Ryan, left, and his father, Tim Ryan, on the roof of 401 Wisconsin Ave. The Mt. Royal Investments partnership proposed to redevelop the building into 46 apartments. However, Tim Ryan now says he may sell the building and walk away.

The Ajax complex of buildings, a former longtime industrial site in the 1500 block of Clark Street, is shown in July 2016.