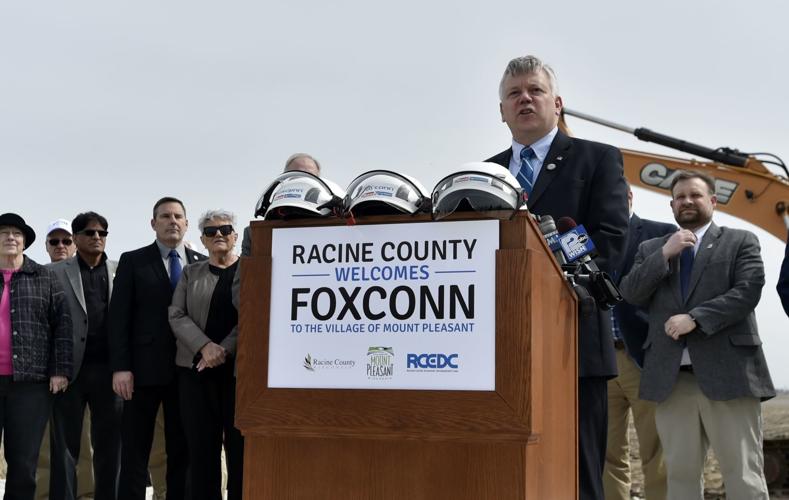 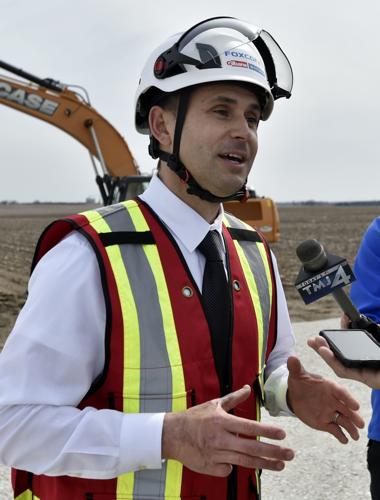 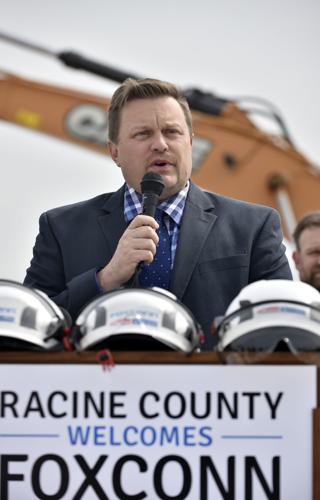 Racine County Executive Jonathan Delagrave speaks at the Thursday groundbreaking ceremony at the future site of the Foxconn plant. 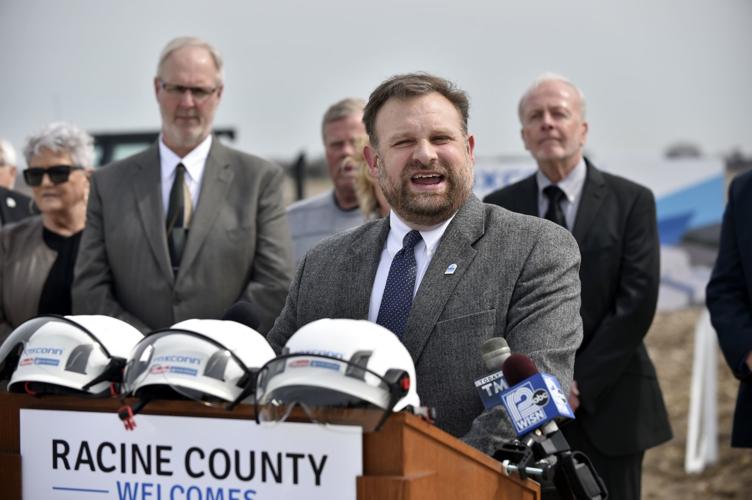 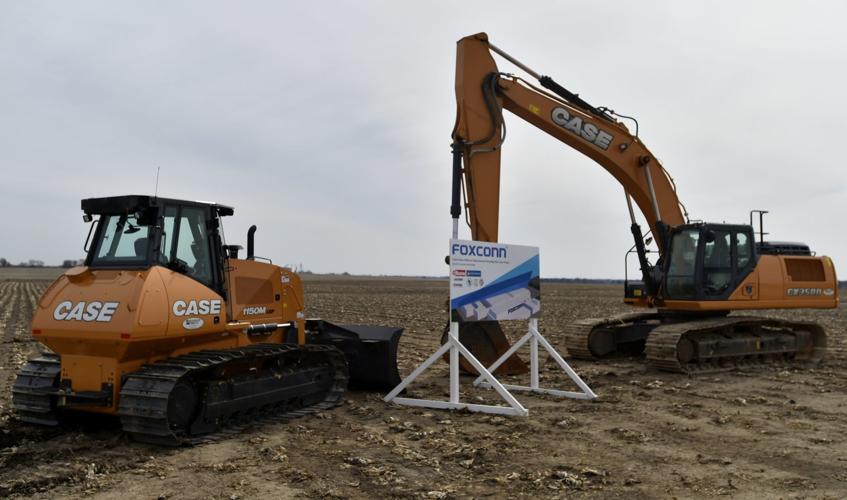 A Case bulldozer and excavator were on site for the Foxconn groundbreaking ceremony, held Thursday. 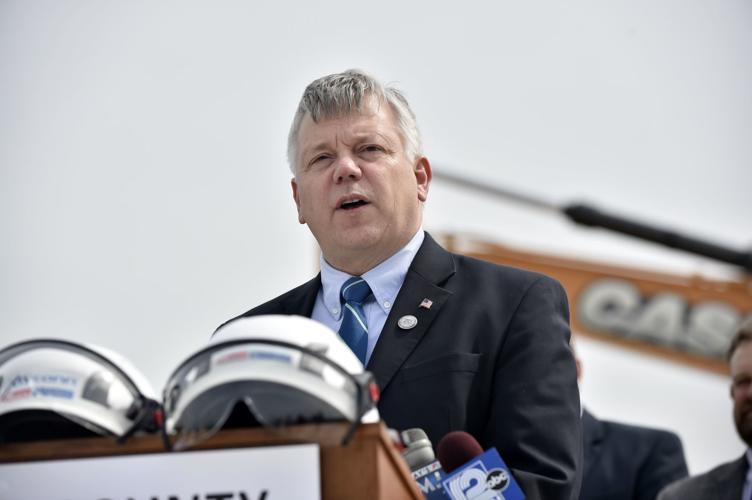 Mount Pleasant Village President David DeGroot speaks at a groundbreaking ceremony held at the future site of the Foxconn Technology plant on Thursday.

Also on Thursday, Foxconn, M+W and Gilbane also announced that 90 percent of the contractors for the initial site work are from Wisconsin, including 10 percent by Racine County-based firms. Ten percent are minority, veteran and/or woman owned.

“We are committed to and passionate about putting Wisconsin first,” said Adam Jelen, senior vice president, Wisconsin, for Gilbane Building Co. “Right out of the gate, these first bid awards reflect our passion for building capacity in local workforce and businesses.”

“This is a significant milestone, and we are excited to have our project move forward,” stated Louis Woo, special assistant to Foxconn Chairman Terry Gou. “We are delivering on our ‘Wisconsin First’ commitment.”

Site work will be underway by no later than next week, Jelen said.

Jenny Trick, executive director of Racine County Economic Development Corp., has been at the heart of the Foxconn project from its inception.

“What has been accomplished in less than a year’s time is simply remarkable,” said County Executive Jonathan Delagrave. “I’m proud that through it all, our focus has remained on achieving what is best for our community, our residents and our taxpayers.”

Last October, the Village of Mount Pleasant was announced as the future home of Foxconn. Since that time, much progress has been made, both on the state and local levels.

“In the past year, we’ve negotiated and approved a development agreement, financing agreements, numerous permits and been at the table with various state and local agencies and partners,” said David DeGroot, Mount Pleasant village president. “The amount of coordination and cooperation that has made this day possible is unprecedented and should be celebrated.”

“What an extraordinary and historic day to be here,” said Racine Mayor Cory Mason, who on Wednesday, for at least an hour at Racine City Hall, met with Foxconn’s Woo and the Taiwanese company’s director of U.S. strategic initiatives. “… This is the best economic opportunity to come to this region in a generation,” Mason said.

This week, the Village of Mount Pleasant completed the transfer of almost 800 acres of land to Foxconn, representing a significant portion of Area I of the project location and enabling the start of initial site work.

The land transfer also marks a financial milestone as it enables the beginning of a $75 million Special Assessment payment to the village on the property transferred to Foxconn, as required by the local development agreement. That is in addition to the $60 million provided by Foxconn in December 2017 for land acquisition in Areas 2 and 3.

Jelen said the first phase of bidding totals about $100 million in contracts to Wisconsin businesses spread across 25-30 Wisconsin companies for site development work on phase one of the Foxconn Science and Technology Park.

He explained that the first phase will consist of a massive excavation of about 4 million cubic yards of soil, erosion control and stormwater management to get the site ready for the next steps of the infrastructure. That amount of soil is the equivalent of a National Football League field 625 yards deep, he said.

“The early development work will have about 500,000 work hours on site with a peak of 400 workers and create 800 direct and indirect jobs,” he said, stretching into August 2019.

The building program will begin in earnest later this year and into next year, Jelen said.

“We are delivering on our ‘Wisconsin First’ commitment.”

MOUNT PLEASANT — For possibly the first time since the Foxconn Technology Group chose the Village of Mount Pleasant as its project location, t…

MOUNT PLEASANT — A Wisconsin-based contractor, Guelig Waste Removal and Demolition, is likely to be hired to raze areas along Braun Road to ma…

US Job Market Still Running Too Hot for Fed: Sim

US Job Market Still Running Too Hot for Fed: Sim

Racine County Executive Jonathan Delagrave speaks at the Thursday groundbreaking ceremony at the future site of the Foxconn plant.

A Case bulldozer and excavator were on site for the Foxconn groundbreaking ceremony, held Thursday.

Mount Pleasant Village President David DeGroot speaks at a groundbreaking ceremony held at the future site of the Foxconn Technology plant on Thursday. 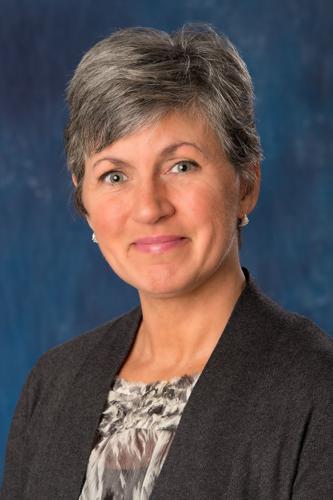 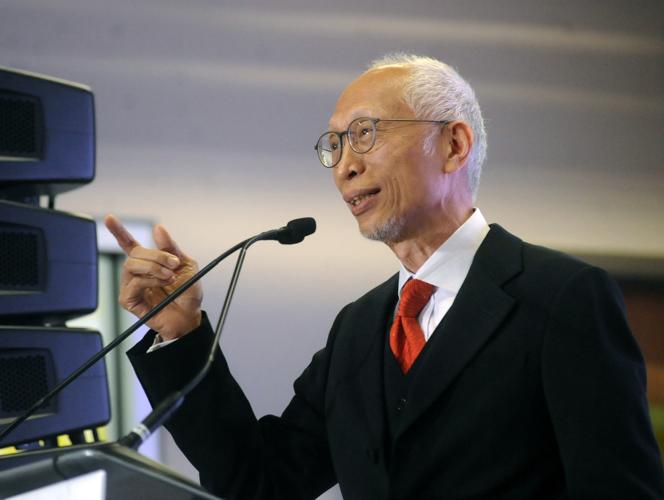