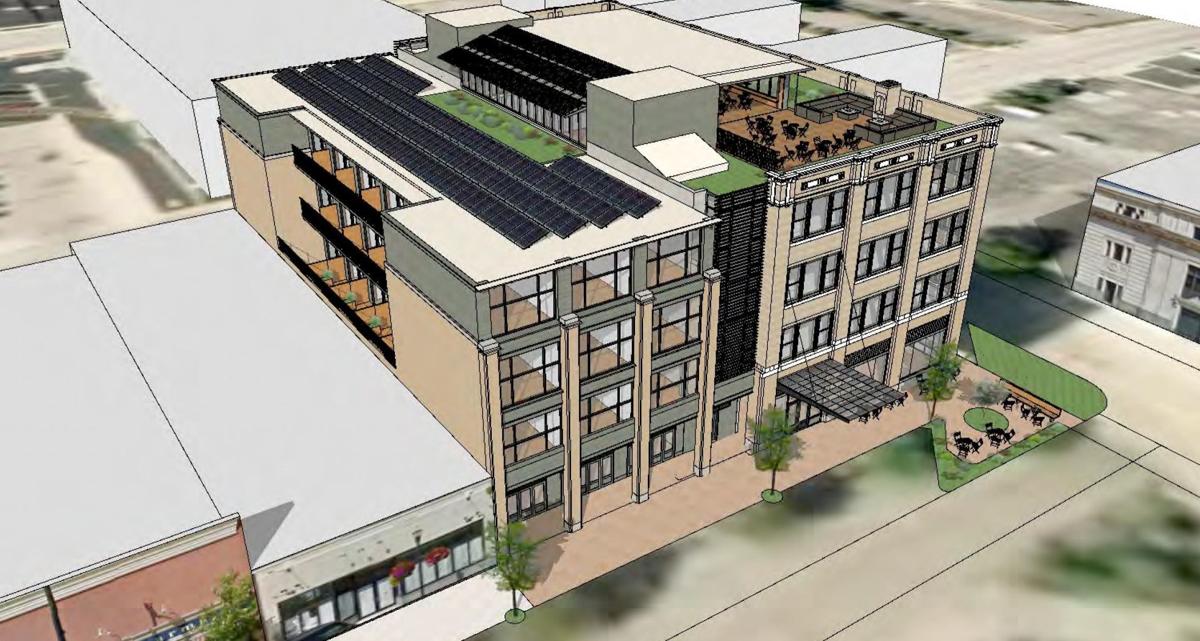 This image shows how the 80-room destination hotel that Dominion Properties plans to build on Monument Square is envisioned. The right half of the building in this image is the former Zahn's building, and the left half is new construction. The rooftop bar and observation deck also are shown, along with solar panels. 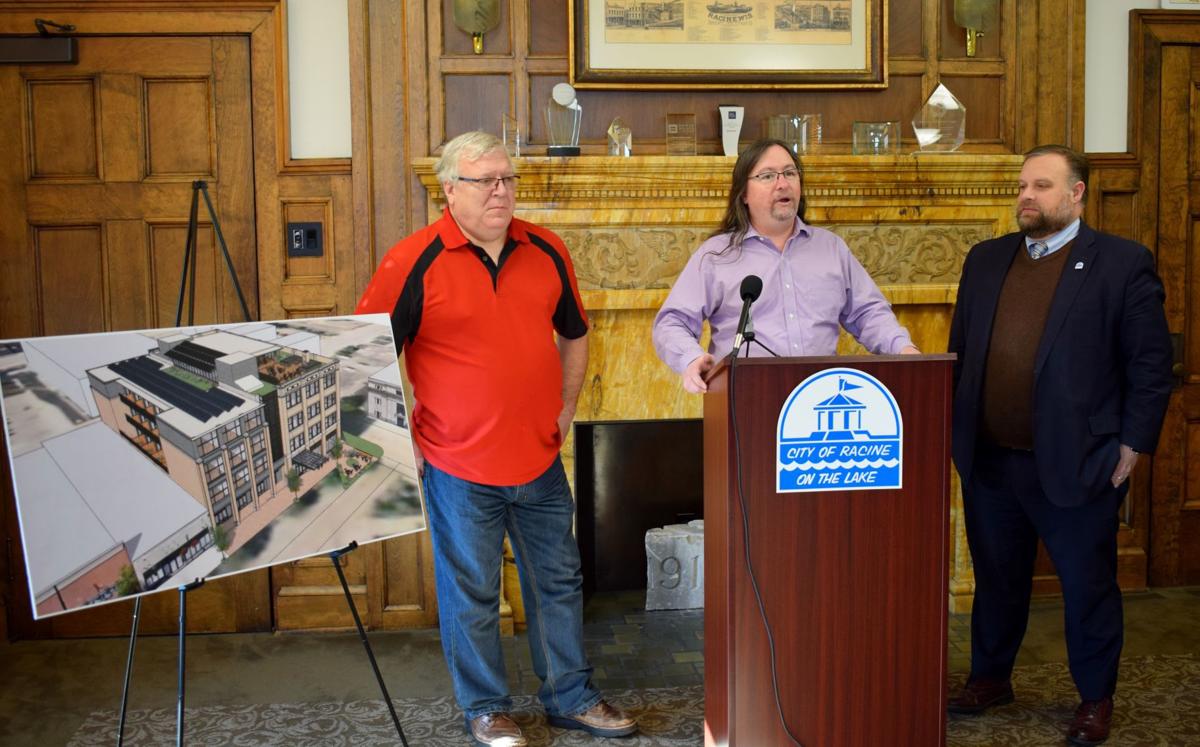 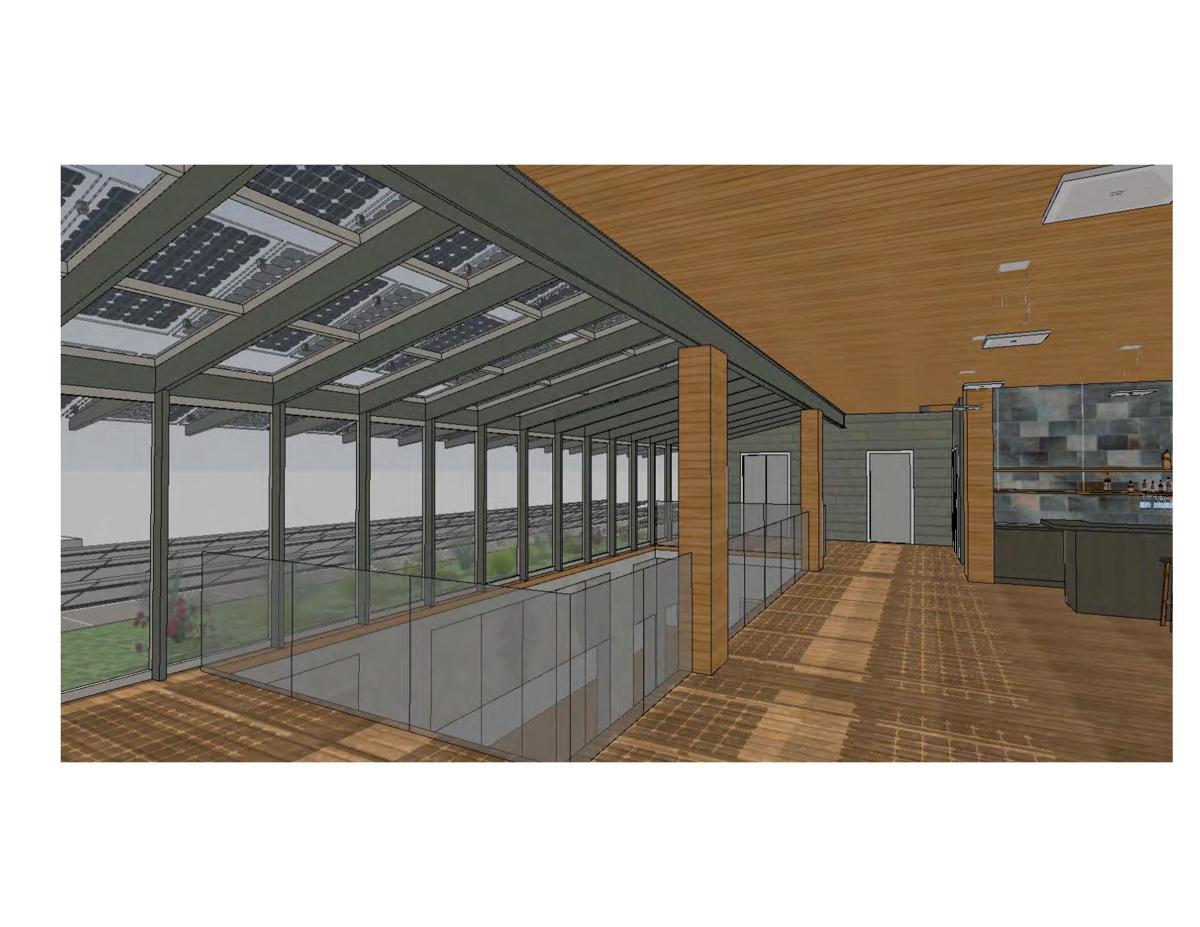 This shows a view from inside the rooftop structure planned for the former Zahn's department store at 500 Main St. 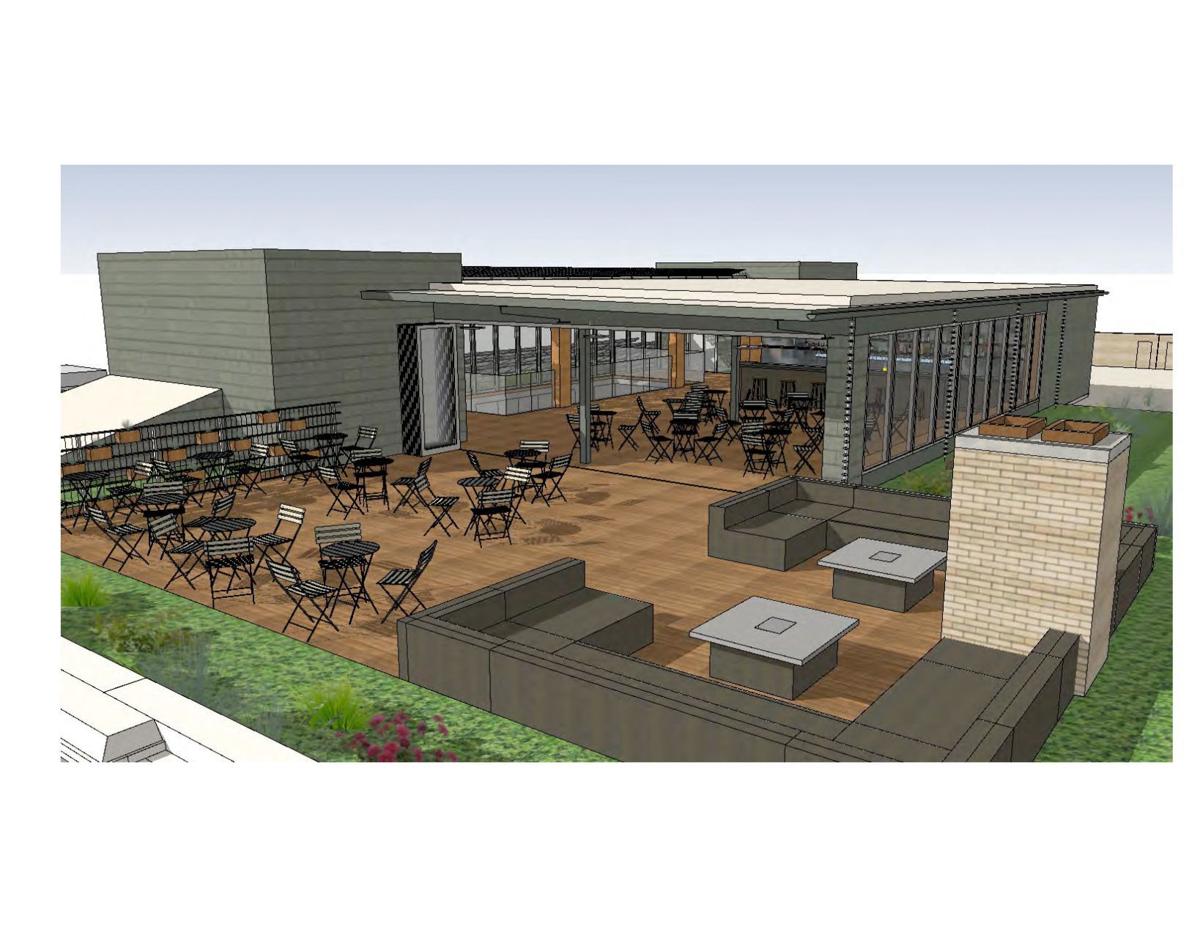 A view of the rooftop bar and observation plaza planned for the former Zahn's Department Store, 500 Main St.

The building has a 38-year span of lifelessness; Zahn’s closed in 1981, the year Ronald Reagan was elected U.S. president. In the 1990s there was an attempt to turn it into a children’s museum called The Imaginarium, but the effort ultimately fizzled.

Not only does Dominion plan to revitalize the four-story building at 500 Main St., but the developer would also construct a four-story addition in the vacant lot south of the existing building.

Adams — who was born in Burlington and grew up in Twin Lakes — said this would not only be Dominion’s first hotel but also the largest project it has undertaken. Dominion primarily does residential development.

However, he said the company he cofounded in 2000 has gone to experts in the hospitality industry throughout the process of developing this one. Dominion has chosen South Carolina-based Charlestowne Hotels to operate the hotel. Adams said Charlestowne operates about 50 boutique, or destination, hotels across the country.

Elements of the plan

The addition would double the 1925 building’s size from 40,000 square feet now to nearly 80,000 square feet. The developer would also add a fifth-story structure with a four-season rooftop bar and observation plaza.

The rooms would range in size from about 450 to 750 square feet, Adams said. “They’ll be big,” he said, because of how the existing building’s windows are laid out.

The first floor would include:

The basement under the existing building would have a movie theater, exercise room and sauna, Adams said.

“This is a really great project that will bring much-needed space to the Downtown, revive an historic building … I think the energy this will bring to the Downtown and Monument Square is going to be really exciting,” Mason said.

The project would require about 75,000 working hours for its construction, and the hotel — so far unnamed — would employ 70 to 80 full-time-equivalent people, Adams said. Mason said Dominion has made a firm commitment to fully comply with the city’s Racine Works ordinance. That requires that at least 20% of the worker hours must come from low- to moderate-income City of Racine residents.

Dominion has also committed to achieving a LEED (Leadership in Energy and Environmental Design) Gold certification — although Adams said he would shoot for Platinum, the highest level. The company also committed to providing electric vehicle charging infrastructure.

Many of the hotel’s sustainable elements would be visible from the rooftop structure, Adams said. The rooftop would include photovoltaic solar panels that would create electricity for the hotel.

From the rooftop, he said, people would be able to see the SC Johnson Research Tower, Wind Point Lighthouse and other such landmarks.

“For me,” Mason said, “when I think about things I try to talk about as mayor, things that we care about as a city — whether that’s sustainability or smart-city work or including our workforce and rebuilding the middle class and building up the Downtown — this project really hits all those marks extremely well. … We’re excited to partner with Dominion on this project.”

Adams added, “I know it’s the highest and best use for that particular spot. When I look at a building, I can tell immediately what it should be. And I’m like, ‘It needs to be a hotel.’ It’s in the perfect spot.”

In addition to buying the former Zahn’s, Dominion also bought 426 Wisconsin Ave., a former drive-thru bank which would provide 45 parking spaces for the hotel.

In addition, as part of the developer incentive agreement, the City of Racine would agree to lease to Dominion:

City Administrator Jim Palenick said the expectation is that most hotel patrons would disembark at the front entrance and use valet parking.

Dominion’s development incentive agreement with city staff is scheduled to go to the Redevelopment Authority on Thursday, Dec. 5; the city Finance and Personnel Committee on Monday and to the City Council on Dec. 17. The agreement would then be signed by all parties over the course of a few days, Palenick said.

Adams said he hopes to start installing a geothermal field on April 1 in the vacant lot where the addition is to be constructed and then begin full construction on the entire project on May 1. He expects 52 weeks of construction and an opening on May 1, 2021.

“I think the energy this will bring to the Downtown and Monument Square is going to be really exciting.” Racine Mayor Cory Mason

"I think the energy this will bring to the Downtown and Monument Square is going to be really exciting."

The city would contribute $2.895 million in cash incentives to help a developer with a conversion of the former Zahn’s building to a destination hotel. Local, Page A4

A massive multi-family development proposed for the current Thompson Strawberry Farm returned to the drawing board on Thursday.

Zahn's incentives approved; Palenick: 'This is the way you're supposed to do it'

RACINE — The $2.89 million incentive package for the redevelopment of the former Zahn’s building at 500 Main St., which City Administrator Jim…

This image shows how the 80-room destination hotel that Dominion Properties plans to build on Monument Square is envisioned. The right half of the building in this image is the former Zahn's building, and the left half is new construction. The rooftop bar and observation deck also are shown, along with solar panels.

This shows a view from inside the rooftop structure planned for the former Zahn's department store at 500 Main St.

A view of the rooftop bar and observation plaza planned for the former Zahn's Department Store, 500 Main St.